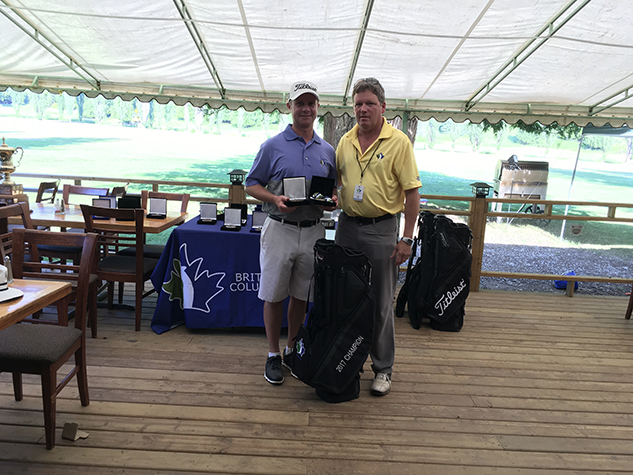 CRAWFORD BAY -- Victoria’s Craig Doell won the B.C. Mid-Master Championship and then had to work a little overtime on Thursday to claim the Mid-Amateur title at Kokanee Springs Golf Resort.

Doell captured the Mid-Am crown on the fifth hole of a sudden-death playoff with Cameron Powell of Fernie. Both players had finished the 54-hole competition at three-over par. Doell closed with a one-under 70 on Friday.

Doell extended the playoff when he made a 20-foot putt for par on the fourth extra hole. He made another 20-footer on the fifth playoff hole and won it when Powell missed from short range. The Mid-Amateur competition is open to players 25 and older. The Mid-Master category is reserved for players 40 and over.

Doell won the Mid-Master competition by one shot over Sandy Harper of Nanaimo. Port Moody’s Gudmund Lindbjerg was third at five-over, while Vancouver’s Doug Roxburgh finished alone in fourth place at six-over.

On the women’s side, Parksville’s Josee Deslauriers swept the Mid-Amateur and Mid-Master crowns. Deslauriers shot a two-over 75 Friday to finish at 11-over par. That was five shots better than runner-up Jackie Little of Procter. Port Alberni’s Christina Proteau finished third in the Mid-Amateur competition at 17-over.

Little also placed second in the Mid-Master competition, while Vancouver’s Phyllis Laschuk and Lynda Palahniuk of Kelowna tied for third at 18-over.

A two-person best-ball competition was also held in conjunction with the Mid-Amateur and Mid-Master Championships. Daniel Brown of Grand Forks and Adam Kernan of Kamloops won with the score of 13-under par. That was one shot better than the teams of Doell and partner Greg Trammell of Vancouver and Harper and Harry Ferguson of Invermere.