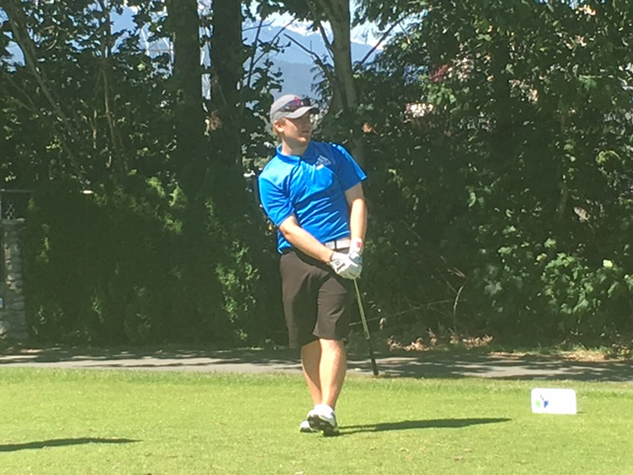 The Elder Zalli Brother, Christian, Takes A 3-Shot Lead Over His Younger Sibling, Ilirian, Into The Final Round Of the BC Junior Boys Championship At Squamish Valley G&CC - Image Credit Brad Ziemer/Britsh Columbia Golf

SQUAMISH -- When the round was over, the big brother put his arm around the shoulders of the little brother and offered words of encouragement. That’s the way it is for Christian and Ilirian Zalli, who like to beat one another on the golf course, but also want to see the other do well.

On Thursday, it was big brother Christian who beat his little brother and grabbed a three-shot lead heading into Friday’s final round of the B.C. Junior Boys Championship at Squamish Valley Golf & Country Club.

Christian, 18, birdied three of four holes early on his back nine and shot a two-under 70 that left him at seven-under through 54 holes. Ilirian, 15, scrambled his way to a one-over 73 that left him at four-under. The two brothers began the day tied for the lead at five-under.

Ilirian’s round ended with a bogey on the tough par 4 18th hole at Squamish after he drove it right off the tee. That’s when his brother walked over to him and offered some words of encouragement. “I just said, it’s fine,” Christian said.

“He had some hard holes on the last few holes there. I said, there’s another day, don’t worry about it. He can make a lot of birdies. He was having a little trouble today off the tee. If he can fix that he will be fine for tomorrow, I am sure.” Ilirian did some terrific scrambling on the back nine to keep in touch with his brother.

He chipped in for birdie on No. 10 and made an all-world par on No. 13 after driving his ball left off the tee. He rolled in a long birdie on the par 3 16th. Those shots made up for a couple of missed putts from short range and some erratic drives.

Ilirian appreciated the support he received from his brother. “It was good to have him there,” he said of Christian. “That is kind of like the big brother attitude that he had there on 18. He wasn’t treating me like another player, it was like my older brother being there for me, which is really awesome.”

A year later, they both now have an opportunity to win it. Christian said even though he has a three-shot cushion, he will not hold anything back in Friday’s final round. “I am always looking to go lower,” Christian said. “This is a golf course where you can really score. I want to stay aggressive and keep making birdies. That is all I can do. What other people do is up to them. That is what I can control. I know I can make birdies and that's going to be my focus tomorrow.”

Ilirian knows he likely will have to go low on Friday to catch his brother. He has already shown that he can do just that with a six-under 66 in Tuesday’s first round. “I just have to go out and play my heart out tomorrow,” Ilirian said. “I have nothing to lose. Anything can happen. If I can shoot another 66, I think that would be pretty good.”

It may not just be a two-man race. Lurking five shots out of the lead at two-under is 2016 B.C. Amateur champion Nolan Thoroughgood of Victoria. The 16-year-old shook off a triple-bogey at the par 5 sixth hole to post an even-par round of 72.

Thoroughgood birdied two of his final three holes Thursday and knows he will need lots more of them on Friday to catch the leader. “I just wanted to give myself a chance going into tomorrow,” Thoroughgood said. “I just wanted to get myself back to even or under-par for the day. I just have to make some more birdies tomorrow, I guess. That’s all I can do. Play as good as I can and hopefully that will settle it.”

Thomas Verigan of West Vancouver moved into fourth place at one-under, thanks to a three-under 69 on Thursday. Langley’s Khan Lee had the day’s best round, a five-under 67, and is alone in fifth spot at even par. The top three players after Friday’s final round will represent British Columbia at the Canadian Junior Boys Championship, which goes July 31-Aug. 3 in Kingston, Ont.

CHIP SHOTS: The Zalli brothers lead the best-ball competition that is being held concurrently with the junior championship. They sit at 21-under through three rounds, two shots better than Thoroughgood and his partner, Keaton Gudz of Victoria. . .The leaders will tee of at 11 a.m. in Friday’s final round.