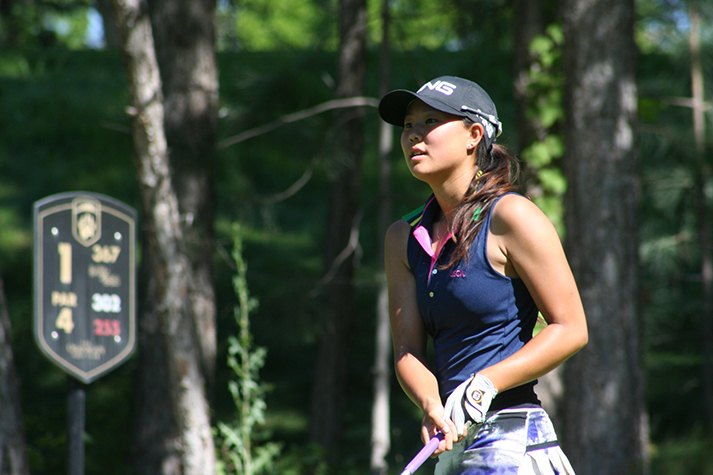 The sweltering heat took its toll on the field for the 3rd round of the BC Junior Girls Championship on The Bear Course at Okanagan Golf Club with the temperature hovering around 35 degrees and certainly feeling much hotter as the day wore on.

Despite the sauna-like conditons Richmond's Alisha Lau overcame her rocky start, where she made bogey on her first 3 holes, by making birdie on two of her next four. That would settle her down somewhat and she managed her way around the rest of day to finish at 2-over 74 and still holds an 8-shot lead heading into Friday's final round.

Her playing partners, Esther Lee with a 73 and Angel Lin with a 74, are in second and third place respectively and the three of them will all tee it up again together in Friday's final group.

Maple Ridge's Lee looked to be making at least a slight dent in Lau's considerable lead when she had shaved 3 strokes off of the deficit after 9-holes but by the 14th Lau had regained her 9-shot advantage when she made birdie on the par 3 14th while Lee could only manage a bogey. Lau would make one more bogey on 15 and finish with 3 pars to maintain a comfortable lead heading into the 4th and final round.

The third member of the group, 14-year old Angel Lin, spent most of the day bombing her drives past her older counterparts but wasn't able to take advantage as she parred 12 of her first 13 holes before finally making her first birdie on the 14th. The heat may have got to her as well as she bogied her last two holes to sit at 2-over for the tournament and alone in third spot.

Surrey's Hannah Lee posted her third consecutive 1-over 73 and is solo fourth while the top five is rounded out by Lau's Quilchena Clubmate, Karen Zhang, and Coquitlam's Shania Remandaban, both at 4-over for the tournament. Remandaban also had the low round of the day with an even par 72 as no one in the field was able to break par under the scorching sun.

After her round Lau talked about the difference in her play over the first two days compared with Thursday's battle in the sun, "In the beginning it got into my head a little bit just because I hadn't had the greatest warm-up. I was pulling it a little bit on the range and I was a little tentative with my swing," she said. " I short-sided myself on two and three and I wasn't confident with my chip shots and I just didn't commit, so that's how I ended up making all those bogies."

But sometimes from adversity comes a positive and that's the way Lau chose to view it, saying, "You know, it was a little bit different mindset starting off with a bunch of bogies just because the past couple of days I've been starting off really well and it was like, 'Okay...cruising...' and today at the beginning I was thinking, 'Okay...we kinda got to get it together and start figuring things out'. After maybe four or five holes I kind of settled in. I made birdie on four which was good for my piece of mind. I was like, 'Okay, we're good, let's just settle down a bit'. "

And settle down she did, doing what was required to keep the rest of the field and the heat at bay. The hot Okanagan sun is expected again for tomorrow. Lau will be prepared though, "I'm just going to take it one shot at a time, try to have the same mind set as the first two days when I played well. Eighteen holes is a lot, so I'm just going to keep my head down and keep trucking away."

In the Best Ball Competiton, Lau and her partner Hannah Lee also have a commanding lead as they sit at a combined 19-under par, a full 10 shots clear of second place Michelle Zheng and Esther Lee. Tied for third are Angel Lin and Kasira Muanyam along with Kelowna locals Emma Sabbagh and Tiegan Taylor.

Of note was Taylor's front nine today which included no less than 5 birdies, which were unfortunately offset somewhat by a quadruple bogey 7 on the par 3 sixth hole. Taylor would end up shooting 1-over 73 and sits alone in 7th place.

The field was was cut to the low 28 following 54-holes with the first time on Friday being at 7:30am