It's All In A Day's Work For These Four-Legged Golf Course Superintendent's Assistants. From L-R: Beans, Jordy & Klay - Images Courtesy Respective Owners As Per Below

We’ll start with the obvious: The subjects of this story are all very good boys and girls. They are also very lucky dogs.

What a life they live, up before the crack of dawn and free to run all day on the golf course with their owners.

Those owners -- golf course superintendents all over British Columbia -- are lucky as well. They get to go to work with their best friends, who often ride shotgun in their Gators when they are not racing alongside.

Not every golf course ‘super’ has a dog, but many do and say it’s one of the coolest things about their job. They also say it’s great for the morale of their grounds crew team and puts smiles on the faces of the golfing public.

Tyler Patroch, superintendent of Point Grey Golf & Country Club in Vancouver, has had his border collie, Wrigley, for five years. “Everybody uses the excuse they chase the geese away, but deep down I think it’s certainly good for the soul,” Patroch says of having a dog on the course.

“We have a lot of long days and they never complain about green speeds or golf course conditions. Truthfully, they are just good companions and they are out there with you all day long. They certainly help you make it through a 12-hour day.”

Like Springsteen, border collies are born to run, so Wrigley is right at home on the golf course where she has lots of room to roam. “It’s the best life for a dog,” Patroch says. “I couldn’t imagine her having any other life. It is just so suitable for a border collie.

“She is always carrying a ball and dropping it at people’s feet for them to throw. If I get in a cart and drive away she will follow. She is always there. She won’t get too far away from me. She loves to run and it’s funny when you get into a routine and I’m going through the holes, she’ll be running ahead and she’ll know where I’m going just based on what she’s done so many other days.

“And she is good for my staff, too. She’ll come in in the morning and walk around and say hi to everyone. She gets a pet from everyone. It lightens the mood.”

Gary Stadnek, superintendent of Okanagan Golf Club in Kelowna, got his dog, Jordy, back in 2012. A Vizsla-Chihuahua mix, Jordy was an SPCA rescue dog. “I wanted a purebred Vizsla and my son wanted a Chihuahua so when I saw him at the SPCA it was meant to be,” Stadnek says.

“He had a broken front right leg and they were going to euthanize him because no one wanted to deal with the broken leg. I went to see him and fell in love with him right away. He has been a great pup for me. He was a year and half when we got him so he is going on about 10 right now. He was my first golf course dog.”

This Is 'Jordy'. He Keeps A Watchful Eye On His 'Dad' Gary Stadnek, Superintendent Of Okanagan Golf Club In Kelowna - Image Courtesy Gary Stadnek

Stadnek says he got Jordy hoping he would help dissuade the geese from setting up shop on the golf course. “And he does that, he’s awesome, but it’s his companionship I find more important than anything. When you are in those dogs days (no pun intended) and you are dragging along and in your 12th, 13th or 14th hour at the golf course, you’ve always got that companion with you who is ready to give you a lick on the face and is happy as happy can be.

“And another big reason I got him was the interaction with the members. I am a big guy, I am 6-4, 250, and I can be intimidating, I guess. But when you’ve got the pup with you it gives you that ice-breaker. When I have him running alongside my cart, the members want to stop and see him and that opens up a conversation.”

Sean Collins has worked in the business since he was in his teens and knew the first thing he was going to do when he got his first superintendent’s job was get a dog. Collins quickly found Klay when he was appointed superintendent of Belmont Golf Course in Langley.

“He’s a “unique mix,” Collins says. “His dad is a Shepherd/Lab mix and his mom is a Collie/Boxer mix. We got him last Labour Day and he started coming to work right away with me as a pup three months old. He runs along behind me and helps me do whatever I am doing in the morning.

“When he first started coming out with me he couldn’t last a full day. He’d stop and would be out of breath and tuckered out. Now he does laps around the ponds and is passing me in the fast Gators. He is chasing birds and geese and then going for swims. He loves it out here.”

Collins says Klay has done a great job of keeping geese off the golf course. “Our geese situation was bad here,” Collins says. “My first summer there were so many geese, crap all over the  greens in the morning in different areas. And now we only have one flock of geese on the course. I come out with a banger and they kind of look at me and they move, but come right back. Klay comes along and he definitely scares them. He has never caught one, which is a good thing, but he definitely scares them.”

Aaron Mansbridge’s dog has been known to chase more than geese. Mansbridge, superintendent of Nicklaus North Golf Course in Whistler, chuckles as he relates the story of his dog Beans chasing a bear. “It has only happened the one time,” Mansbridge says.

“We were aerating tees and I saw the bear up ahead. I told Beans to leave it so he did. There is a patch of bush between the two holes we were working and I saw the bear go in there, so all was good. But then it actually walked up parallel to us and came out behind us and I heard Beans jump off the cart and he was gone.

“He was running just as fast as the bear. It was almost like he was herding. He probably just thought it was a big dog. He’s not used to being around bears. So the bear was kind of growling and running away and eventually Beans listened and stopped chasing him. But he probably chased him for a good 80 yards. He was right on his tail for 80 yards.” 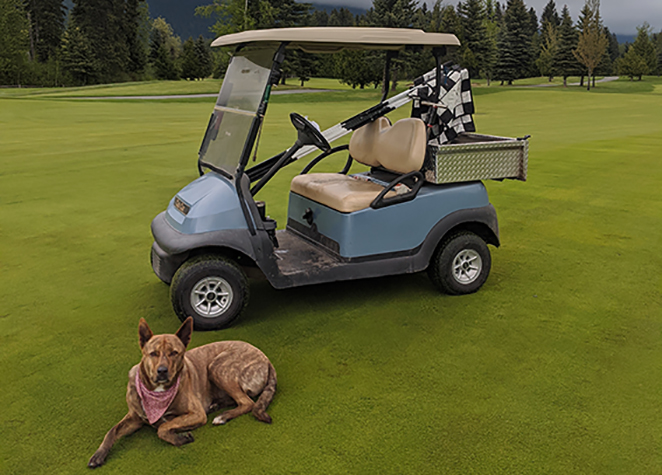 Mansbridge isn’t exactly sure what kind of dog Beans is. “He is about 75 pounds, a serious-looking dog,” he says. “People think he is an intimidating-looking fellow. He looks to have some Shepherd in him, he’s a brindle (Tiger-striped) colour so he looks a little like a dingo to be honest.”

When he’s not running the course, Beans sits in the cart alongside Mansbridge with his head held high. “You get a lot of smiles and grins from golfers, especially if they are paying guests and maybe haven’t seen you out there. My dog in particular sits in the cart kind of like a human and he is big and tall enough that my head and his head are at the same height. He sits looking out the front so he gets lot of chuckles. It is kind of nice for everyone all around.”

Jamie Robb, superintendent of Marine Drive Golf Club in Vancouver, had an ulterior motive when he got his dog Stanley back in the fall of November 2014. Yes, he planned to take the dog to work with him, but he also figured the then pup would come in handy when he popped the big question to his then girlfriend. “He was my proposal-tool,” Robb says. “I figured she couldn’t say no to a puppy.” She didn’t.

Robb says Stanley is well trained and has three simple rules he must follow at Marine Drive. “No golf balls, never touch anyone’s golf balls,” Robb says. “No greens, he’s trained not to go on the greens. And no bunkers. Those are kind of the big three for me. Robb describes Stanley as a mutt. “He’s a Husky, Shepherd, Retriever mix” and there is an interesting story about his name.

Robb was superintendent of Capilano Golf & Country Club in West Vancouver when he got the dog and his dad suggested it should have a golf-appropriate name. “Stanley Thompson was the architect at Capilano, so Stanley worked,” Robb says. “I am a Leafs fan so it is never going to match up with the Stanley Cup. And I used to drive through Stanley Park every day on the way to work. There are a lot of ways to tie it in.”

When he made the move across town to Marine Drive last year it wasn’t long before one of the members joked that perhaps Stanley’s name should be shortened. “One of our members said, ‘well, you know Stan Leonard was a very famous Marine Drive guy, so you might have to shorten it up to Stan while you are here.’”

So far, Stanley has stuck and he’s a hit with the Marine Drive members. “I think it gives some common ground with the membership,” Robb says. “I’ll drive by and some of the members will be like, ‘hey, Stanley, how are you doing’ and there’s no hello to me and I like to make fun of that. Bring a little light to it. People are definitely more happy to see him than me and I’m okay with that.”