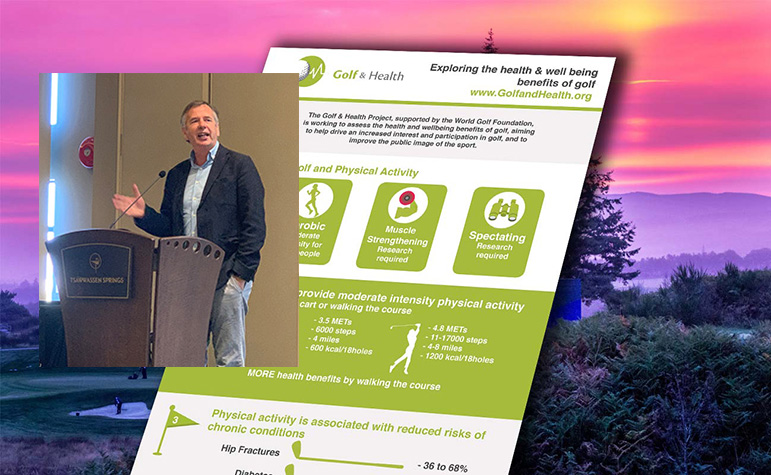 Dr. Roger Hawkes Was On Hand At The BC Golf AGM To Talk About The Exciting Conclusions Coming From The Project Examining The Health Benefits Of Golf - Image/BC Golf/Golf&Health

“It’s official. Golf is good for you.”

Those were the words of Dr. Roger Hawkes, who spoke to the Annual General Meeting of British Columbia Golf at Tsawwassen Springs Golf Club. Hawkes is executive director of Britain’s Golf and Health Project, which is supported by the World Golf Foundation. It aims to study the many and varied health and well-being benefits of golf.

While there has long been anecdotal evidence that golf has significant health benefits, Hawkes said the goal of the Golf and Health Project is to come up with properly evaluated evidence to support such claims.

That work continues, but Hawkes said there is already strong evidence of golf’s health benefits. He pointed to a recent study commissioned by the Golf and Health Project and published in the British Journal of Sports Medicine.

Hawkes was one of the co-authors of that study which concluded that golf can “provide moderate intensity physical activity and is associated with physical health benefits that include improved cardiovascular, respiratory and metabolic profiles, and improved wellness. We had theoretical anecdotal evidence that golf was sort of good -- ‘I feel great, I just played golf,’” Hawkes said.

But he noted that critics would often counter with something along the lines of, ‘It’s a middle-aged men’s sport and all you do is drink and eat too much.’  “That was the impression that many people had at the time,” Hawkes said.

“There was no properly evaluated evidence. . .We need to be able to give our leaders the evidence so that they can stand up and talk about it and if they are criticized they can say, well, isn’t that published in this, this and the other. That was one of our main aims in the Golf and Health Project.”

The study that Hawkes co-authored examined a significant amount of data on the subject of golf and health. “We went through about 4,000 papers and we looked closely at about 400,” he said. Hawkes noted that the conclusion that golf is a moderately intense physical activity was significant.

“Big deal, what does that mean?” Hawkes said with a smile. “But to policy-makers, they start to take notice when you can prove that your activity is moderately intense because all of the benefits they know come as a result of that.

“We found there was pretty good evidence that golfers, compared to the general population, do live an extra five years. This was criticized and this is why this (Swedish) paper never really hit the headlines. People assumed it was your class, your income and that made that difference. But all those things were taken into account.”

Hawkes spent considerable time talking about golf as a prescription. Imagine going to your doctor and getting a prescription to play golf. It’s not as far fetched as it may sound. “I wondered with some of the research and some of the evidence we have, why we shouldn’t be using golf as an intervention and golf on prescription,” Hawkes said.

He said there is anecdotal evidence to suggest that golf-related activities can also help people suffering from Parkinson’s disease and dementia. “We have growing evidence that golf may be associated with good strength and balance,” Hawkes said.

“We await the results of the Parkinson’s study and we have got some evaluation work to do with people with dementia, but I don’t think it should stop us from getting on because I think it’s an opportunity for all to see us doing that work at our golf clubs.” 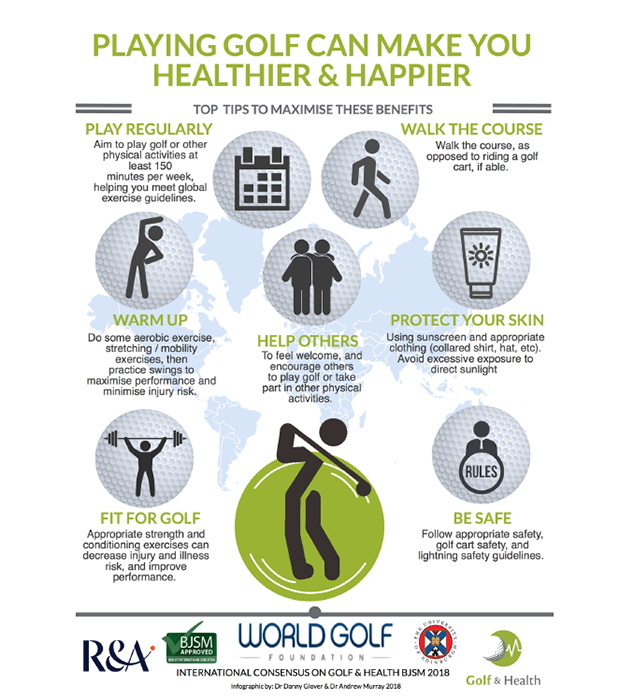 Hawkes said he witnessed first-hand the benefits people with dementia were getting from a program being run by the Lincoln Golf Centre in northeast England. “They bring people and their care-givers together early in the morning, they have coffee together, they sit and talk, the care-givers disappear knowing their relatives are in good hands for the next two or three hours and they do a series of golf-related activities, some driving, some putting and then they go out and walk a hole and play a hole.

"At the end of the morning they come together again with their care-givers who come back. I went to see this and wasn’t sure what it was going to be like, but talking to the care-givers I was really, really impressed. What the relatives said was the day of the golf session -- and it happened every week -- that those people would get out of bed much quicker, they would walk across the car park much quicker, they would get out of the car much more quickly and at the end of the session were going twice as fast walking back to the car.”

Hawkes and others see an opportunity for golf courses to get involved in similar programs that could benefit some of their aging members. “There is plenty of space on the golf courses and time during the week when we can perhaps be doing more,” Hawkes said.

“I view this subject now as a golfer-retention issue and a member-retention issue,” added Kris Jonasson, Chief Executive Officer of British Columbia Golf. “If we can keep people at golf clubs, members of golf clubs for an extra one, two or three years, it not only helps the golf courses, but the care-givers. We have the technology, we have the understanding to do it. I just think we need to think about it in a different way.”