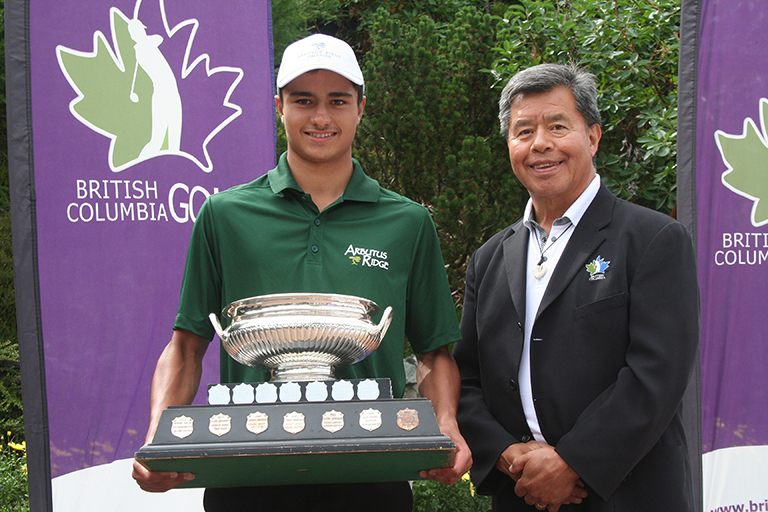 It was home, sweet home for Mill Bay's Tristan Mandur as he calmly rolled in a 5-foot par putt on the 72nd hole at Arbutus Ridge Golf Club, his home course, for a one-shot victory over Coquitlam's A.J. Ewart in the 2016 British Columbia Junior Boys Championship.

"it feels incredible, I mean, to win it on my home soil it means even more. I've worked really hard this year and it feels good for it to pay off, " said Mandur following the trophy presentation.

When asked if having Arbutus Ridge as his home course really did offer him an advantage he said he felt it had, but not quite as much as one would assume, saying, "At times yes, but the way they set up the course, I've never seen it this way, with the tees and the pins....but I felt the way I saw the course and all the slopes, since being a member here for multiple years, it helps."

However, Mandur's second win on 'home soil' in just under two weeks was not without its fair share of drama as challenges rose and fell and it ultimately came down to the final putt on the 72nd hole.

Mandur only put the finishing touches on his Zone 5 Junior Boys Championship less than two weeks ago, with the final round taking place at Arbutus Ridge GC and now he's added the Bower Trophy to his mounting collection of hardware. His win in the Zone 5 Championship was by a margin of 5-shots. Not so this time and he had to come from behind to do it.

The final round began with Mandur trailing Coquitlam's A.J. Ewart and Pitt Meadows' Isaac Lee by one shot but by the time Mandur had strung together 3 straight birdies on holes 3 through 5, he had a 3 shot lead over Ewart and a 4 shot cushion on Lee.

Mandur maintained that gap over his two playing partner-competitors through nine holes. It appeared as though he just had to follow the old 'match play' mentality to keep Ewart and Lee in check. However in the group right in front of them a name very familiar to Mandur was putting together a terrific run of his own.

Royal Colwood's Keaton Gudz birdied 5 of the first 10 holes he played to pull within one shot of Mandur. This was a scene similar to one the two had played out in the Zone 5 championship just a couple of weeks back when Gudz finished runner-up to Mandur and here he was challenging him again on Mandur's home turf.

Unfortunately disaster struck for Gudz on his very next hole as he suffered a quintuple-bogey nine on the 11th hole and not surprisingly was unable to recover. (Gudz was able to extract a small measure of revenge along with partner A.J. Ewart as the two teamed up to take the Best-Ball portion of the tournament from Mandur and his partner Adam Veenstra).

Soon it became rather evident that the overall champion was going to be decided between Ewart and Mandur when Ewart birdied 14 to pull back within two and then saw his deficit shrink to one after Mandur was unable to convert a tricky up and down from the fringe on the difficult island-green, par 3 17th hole. 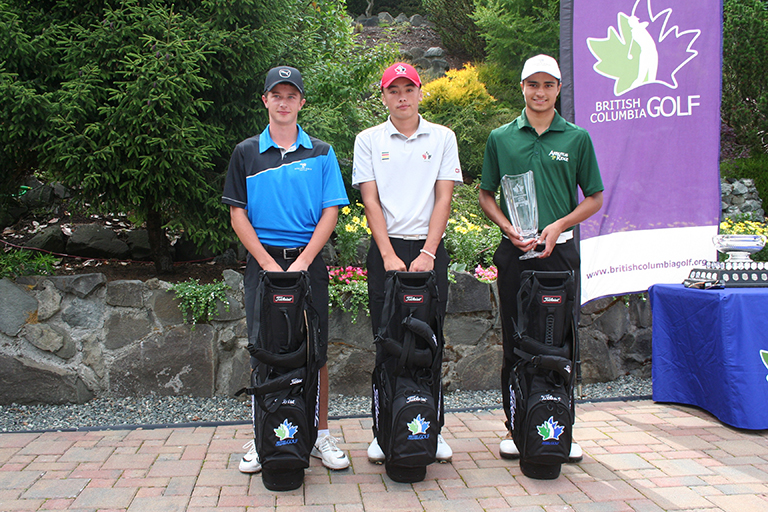 The two went to the final hole of the championship with one shot between them and Ewart holding an ice pack on his neck after apparently tweaking it during a tee shot on the uphill 16th.

The day before Ewart had made a nice up and down bogey from the water hazard on the 16th which he said actually saved his round. The sore neck obviously came into play on his 2nd shot into the green on 16 as he winced notably while his shot from the left hand rough came up some 5 yards short of the green.

But just like the previous day he was able to negotiate the up and down, this time for par, and keep himself within striking distance. While all this was going on the third member of their group, Isaac Lee was in the process of running off what would be 16 straight pars after an opening hole double-bogey had put him behind the proverbial 8-ball.

At this point, pars, which had been his friend all week, were not going to be enough for the young man who plays out of Swan-e-set Bay Resort.

On the 18th tee Ewart's neck seemed to be bothering him again as his tee shot on the very tough, 426-yard, uphill finishing hole leaked to the right and was perilously close to going into the virtually unplayable gorse that runs up that side of the hole.

He gained a moment of reprise when the spotter up ahead waved a green flag to signal that the ball was still in play. Mandur chose to tee off with a 3-iron as he noted the tees were up a bit and, "I saw A.J. hit it a bit right, so I thought just hit an iron and try to make par."

Ewart had battled to stay close to Mandur all day since that 3-birdie run earlier had reversed their positions and evidently he wasn't about to give up now. Hitting a tremendous recovery shot from the long straw he dropped his approach within 12 feet of the hole and a very realistic chance at birdie.

When Mandur's wedge from out of the left rough from 175 yards out came up just short of the green he would have to get the ball up and down for either the win or just to get in a playoff if Ewart should happen to roll in his birdie attempt. But as seemed to happen to him almost all week, Ewart saw his putt burn the edge of the hole and just stay out.

At that point Tristan Mandur finished off his home soil triumph by rolling in his right-to-left 5-footer for par and the celebration was on. Much like a U.S. Open, par was well defended by the Arubtus Ridge GC as Mandur was the only player in the field to finish under par at 1-under (279).

Mandur, Ewart, who finished at even par (280), and Adam Veenstra, the 3rd place finisher at 2-over (282), will represent British Columbia at the Canadian Junior Boys Championship at Clovelly Golf Course in St. John's, Newfoundland August 1 - 4, 2016.

Next year's BC Junior Boys Championship will be held at Squamish Valley Golf Club.

Chip Shots: The low round of the day went to Burnaby's Alex Francois who carded 6 birdies, an eagle and 2 bogies en route to a 6-under 64, setting him up nicely for next week's BC Amateur....Marcus Apchin of Kelowna had the lone hole-in-one of the tournament, his first, with an 8-iron on the 161-yard 4th hole.

As mentioned above, it was Keaton Gudz and partner A.J. Ewart who won the Best-Ball competition with a four-round total of 21-under par over Tristan Mandur and Adam Veenstra, who also had a 21-under total but lost on a tiebreaker countback. In third place was the team of Andrew Spalti and Thomas Verigin at 19-under.