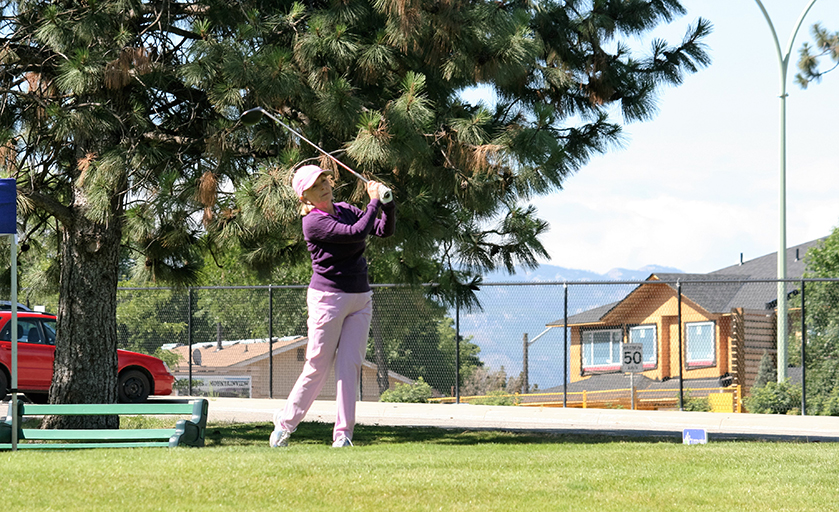 Once Again, The Field Is Chasing Jackie Little At The B.C. Senior Women’s Championship The B.C. Golf Hall Of Fame Member Is In Position To Claim Her Sixth Seniors Title - Images Credit Brad Ziemer

KELOWNA -- Jackie Little collected five B.C. Women’s Amateur titles and hoped to match that total when she began the senior phase of her golfing life. Little accomplished that goal last summer and the Hall of Famer from Port Alberni is now in a position to go one better.

Little fired a one-over 73 in Wednesday’s second round of the B.C. Senior Women’s Championship at Kelowna Golf & Country Club and with a 36-hole total of six-over 150 carries a one-shot lead over Vancouver’s Holly Horwood into Thursday’s final round. Win No. 6 -- which would be her third straight -- is in her sights.

“It doesn’t get old,” Little said of attempting to win again. “It still means a lot. Sometimes it’s harder when you have won it because there’s only one way to go when you’re at the top. It’s a little more pressure-packed. You do it to yourself with the pressure. You have to put all those things aside and just play the game.”

Little played a steady game Wednesday. After a roller-coaster opening round of 77 that included three birdies, Little made just one birdie in her second round but finished four shots better. “I hit the ball a bit better, putted better today, everything was a little bit better today. The one thing I didn’t do was make the birdies today. But that’s okay.”

Her two bogeys came on the par 4 seventh hole and the par 3 15th. “I bogeyed the easy hole on the front, No. 7,” she said. “I dumped a wedge into the bunker. Then I hit what I thought was a good shot on No. 15, but I had too much club. It just took off. It’s tough to hold it on that green. It went right through to the back bunker. I made a good bunker shot but I just lipped out on the putt.”

She made up for it on the next hole, hitting her approach stiff on the par 5 16th and tapping in for birdie. Another B.C. Senior win would spoil a rather unique history of matching provincial titles for Little, who began her competitive career as a junior in her native Alberta.

“That was my goal, to win five of each, B.C. Ams and B.C. Seniors,” she said. “And in Alberta I had two Alberta Juniors, two Alberta Amateurs and I have two Alberta Seniors. So it’s kind of cool. I am quite happy about that.”

To collect B.C. Senior win No. 6, Little will have to hold off a number of close challengers. Those include Horwood, herself a two-time B.C. Senior champion. Horwood shot a tournament-best even-par 72 on Wednesday and sits at seven-over 151. “I was pleased,” Horwood said. “Overall, I was happy with my round. I had a decent day of putting, which was good. The conditions were calm and we had a real fun group, which makes it nice.” 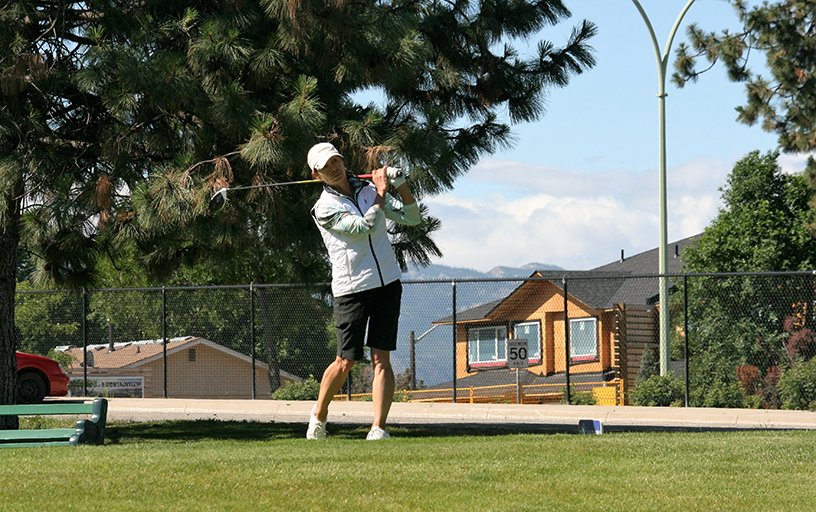 Twice B.C. Senior Women's Champion Holly Horwood Is Gunning For Her Third Only One Shot Back Of The Leader Jackie Little

Horwood won back-to-back B.C. Senior titles back in 2006 and 2007. She came to the tournament thinking more about winning her second Super-Seniors title for players 60 and over. “I am thinking Super-Senior realm at this point,” said Horwood, who won that title in 2014 at Vernon Golf Club. “The one thing at stake is the top three make the B.C. team and go to nationals. I have done that six or seven times and it is an honour. So if I can do that I would be very happy.”

Little, who played in the same group as Horwood on Wednesday, will play with her again in Thursday’s final round. “Holly is solid,” Little said. “She hits the ball a long ways and she is a good grinder. She doesn’t get upset and just makes her way along. She’s a great person to play with. it’s always an enjoyable day when we play together.”

Little and Horwood will be joined in the final group by first-round leader Penny Baziuk of Sidney. Baziuk shot a seven-over 79 Wednesday and sits third at nine-over 153, three shots behind Little. “I lost my swing for a while and then it came back,” Baziuk said. “No doubles but a bunch of bogeys and only one birdie. Yesterday I had four birdies. That’s a big difference.”

Sandra Turbide of Maple Ridge is alone in fourth place at 10-over 154. She also fired a 79 Wednesday. “I just didn’t have any momentum today,” Turbide said. “I missed a real short putt on the first hole and then I was really nervous after that on all of my putts. I also mis-clubbed on a couple of holes. That kind of stuff.”

Josee Deslauriers of Parksville, Karen Pultz of Surrey and Lynn Kuehn of Lacombe, Alta., are tied for fifth at 155. Horwood has a seven-shot lead on Vancouver’s Phyllis Laschuk in the Super-Senior category. Laschuk shot her second straight 79 on Wednesday.