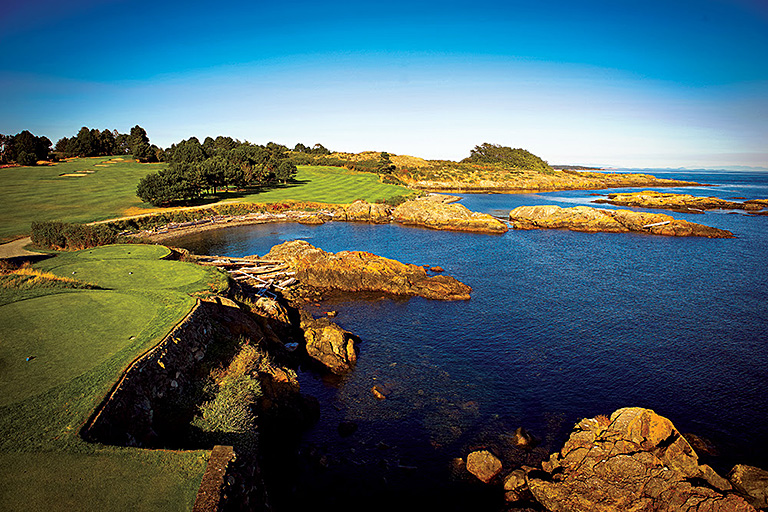 (ACTON, ONT.)—The PGA of Canada’s oldest and most prestigious championship is heading to the west coast in 2016.The Victoria Golf Club hosts the PGA Championship of Canada sponsored by Mr. Lube and presented by TaylorMade-adidas Golf June 12-16, 2016.

“We are very excited about the opportunity to take our PGA Championship of Canada sponsored by Mr. Lube and presented by TaylorMade-adidas Golf to Canada’s west coast and the marvelous Victoria Golf Club,” said PGA of Canada president Constant Priondolo.

“Next year’s championship will undoubtedly be a success story thanks to the marriage of a one-of-a-kind-facility like Victoria and a best-in-class event such as the PGA Championship of Canada.”

Founded in 1893, the Victoria Golf Club is the oldest course in Canada on its original site. Designed by AV Macan, Victoria was ranked No. 14 on SCOREGolf’s 2014 Top 100 Golf Courses in Canada list. The seaside links venue boasts craggy shorelines, lush fairways, challenging ocean breezes and undulating greens, which conjure up images of historic links venues in Scotland.

“When Victoria Golf Club was presented with the chance to host the PGA Championship of Canada, we immediately thought it was an amazing opportunity,” said Victoria Golf Club’s general manager and PGA of Canada member Scott Kolb. “We feel our club is an ideal venue for a match play event with its variety of shot options, natural elements and undulating greens.”

Re-launched in 2011, the PGA Championship of Canada was contested strictly as a match play event thru 2014 with players from the four brackets—Stan Leonard, George Knudson, Al Balding and Moe Norman—looking to advance through the six rounds to capture the historic P.D. Ross trophy.

However, this year’s championship at Cabot Links saw a format change, with 64 top-ranked players from the PGA of Canada Player Rankings presented by RBC playing two rounds of stroke play. The top-16 players from the 36-hole stroke play portion of the event filled out the four match play brackets with the eventual champion winning four match play rounds. Next year’s championship at Victoria will follow the same format.

The player who sits atop the PGA of Canada Player Rankings presented by RBC at the conclusion of the PGA Championship of Canada earns an exemption into the RBC Canadian Open at Glen Abbey Golf Club in Oakville, Ont.

About the PGA of Canada—THE LIFEBLOOD OF THE GAME OF GOLF: Established in 1911, the PGA of Canada is the second oldest and third largest professional golf association in the world. The PGA of Canada is a non-profit Association comprised of 3,700 golf professionals across the country. The association’s mission is to develop, promote, and support its members in living a better life and earning a better living while growing participation, excellence and passion for the sport of golf. The association consists of the national office located in Acton, Ont., and nine zone offices across the country. www.pgaofcanada.com