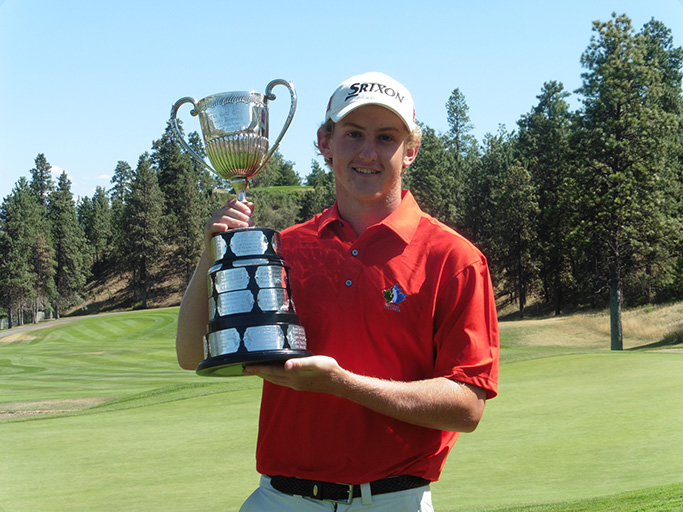 (Golf Canada) - Week of November 9, 2015 -  After a five-week reign atop the rankings, Blair Hamilton has been unseated as the No. 1 amateur in Canada by Jared du Toit. The Kimberley, B.C., golfer picked up two spots while Hamilton slipped 30 places to relinquish top spot.

B.C.'s Stuart Madonald remained in the Top-10 despite slipping slightly in the WAGR as he now sits at number 9 in Canada. Austin James was the biggest mover of the week among the Top-10, climbing 72 spots to grab the No. 6 ranking in Canada after finishing in a tie for fifth at the Kiawah Classic.

It was the third Top-10 result in five fall tournaments for the Bath, Ont., golfer who is the brother of Augusta James. His performance in the weather-shortened event helped the Bucs claim the team title ahead of four teams ranked in the Top-33 nationally (including two in the Top-10) in what program officials called the biggest win in school history for the golf program.

Outside the Top-10, Blair Bursey made the biggest move, climbing into the Top-20 for the first time after a 119-place gain puts him at No. 16. The sophomore from Gander, Nfld., has one Top-10 and a pair of Top-20 results in four tournaments this fall for Utah Valley University. Bursey also leads the team in scoring average this season.

There was very little movement in the amateur women’s rankings as most of the schools have completed their fall tournament schedules. Jaclyn Lee of Calgary moved up to No. 8 in the Canadian rankings after Port Coquitlam's Anica Yoo slipped just over 100 places in the world rankings down to No. 9. Yoo is joined in the Top-10 by Surrey's Kim sisters Taylor and Michelle, along with Namoi Ko from Victoria.

Nick Taylor returned to the site of his first career PGA TOUR victory, finishing in a tie for 20th at the Sanderson Farms Championship. The result was worth 1.40 world ranking points and marks the third consecutive points-paying finish for the Abbotsford, B.C., golfer. Taylor sits at number 4, one spot behind Adam Hadwin and three places ahead of North Vancouver's Eugene Wong.

Richard T. Lee picked up 19 places in the world rankings after finishing in a tie for 46th at the WGC-HSBC Champions event. It was his first career appearance at a WGC event, thanks to his standing on the Asian Tour’s Order of Merit. Lee opened the tournament with a 68, which left him tied for 16th and just five strokes off the lead.

On the Pro side for the Women's Top-10, Langely's Sue Kim and Kelowna's Samantha Richdale sit in 3rd and 8th places respectively.