Haida Artist Ron Russ, The Man Behind The Medals 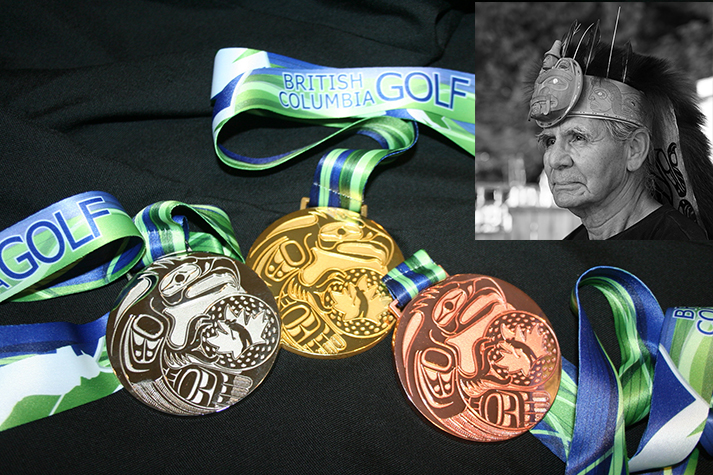 Ron Russ is a Haida master artist known for creating exquisite and intricate one-of-a-kind pieces of art in argillite, yew wood, gold and silver. He was chosen by British Columbia Golf to design a beautiful motif for their awards medals.

Mr. Russ was an avid golfer and considered turning pro, he has shared his golf techniques with many golfers.

When commissioned to design the BC Golf medal, he thought of how difficult it is to get an “eagle” when playing golf. He is from the Raven Clan in Old Massett, Haida Gwaii, BC. On the medal an eagle is depicted holding a golf ball with an engraving of the BC Golf logo. The design on the medal represents excellence in the game of golf.

Today, Russ focuses on yew wood carvings. Yew wood is a strong wood that is indigenous to Haida Gwaii and is found in small quantities. This type of wood is used by Haida carvers to carve intricate details into fine jewelry pieces and small carvings.

He says working with yew wood is like carving boxwood, as, “It can really hold a line.” Other types of wood can chip or break while being carved with a knife. ‘Holding a line’ is also something we all try to do while putting. Yew wood was used for paddles and armour because of its dense and strong properties. 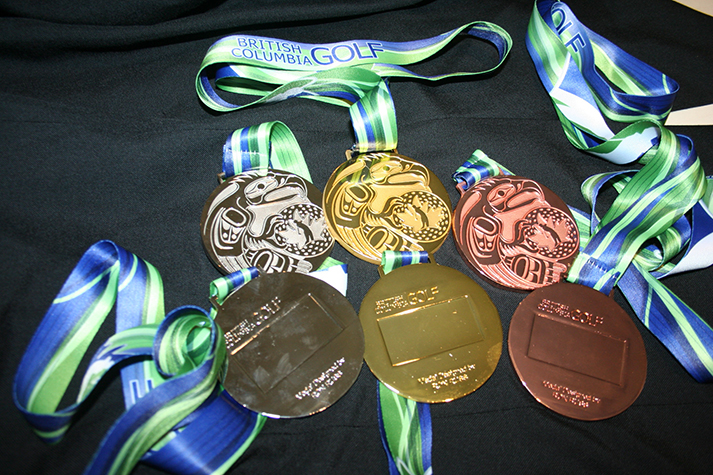 Russ is a respected Haida elder and supports youth and other artists in his community. Haida jewelry and carvings by Ron Russ are sought-after by Haida art collectors.

Russ was born in 1953 into the Raven Clan in Old Masset, BC on Haida Gwaii. His father Reynold Russ was the hereditary Town Chief of Old Masset and his mother June's family of origin come from the Nisga'a Nation. His clan crests are Eagle and Killer whale.  Russ’ wife's Sandra's father is from Sts’ailes, near Harrison Hot Springs, BC. 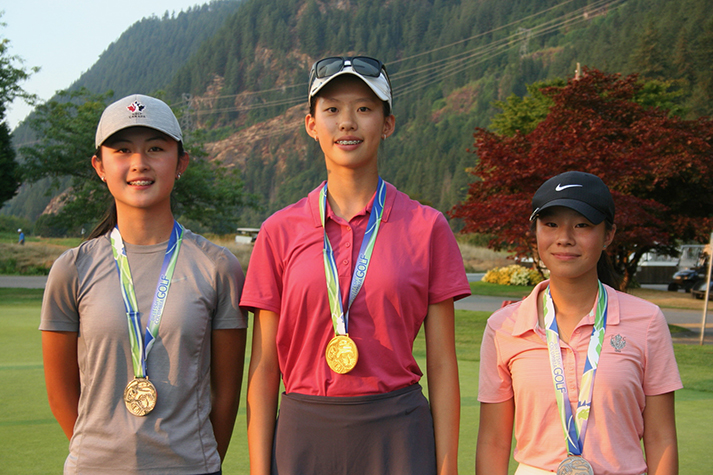 Wearing Their BC Golf Championship Medals From The BC Girls Juvenile Championship Are (L-R) Katherine Hao, Luna Lu & Chelsea Truong

A renowned Haida Master Carver, Russ has been interested in Haida art since his early childhood. He started by drawing stories he heard from his family and elders. He said that he was famous among his friends for the bows and arrows he made for them.

Russ was trained by his grandfather and educated himself by studying books about Haida art. He developed his skills along with friends and they helped each other to master and perfect their sculpting skills.

Russ’ work has been exhibited at the UBC Museum of Anthropology, the Museum of Northern British Columbia in Prince Rupert, BC, and the Museum of Civilization in Gatineau, Quebec. Russ' work is admired and sought after by collectors worldwide.

Ron would like to dedicate this story to his friend and golfing buddy, Bob Hall. It was a game of golf that brought them together.

Latash is a culturally immersed member of the Squamish Nation from Vancouver BC. He has over 25 years of experience working with young people and adults on art, history and cultural projects in the Coquitlam, North Vancouver and Burnaby School Districts. During this time Latash was a Cultural Support Worker and Education mentor. He took an early retirement in 2016 from the North Vancouver School District where he taught Coast Salish art and Culture. He also taught classes on First Nations history in the context of Canada. Latash enjoys working in collaboration with educators and students. He also produces commissioned art for corporations and private collectors. Prior to teaching, Latash worked in public relations and journalism.