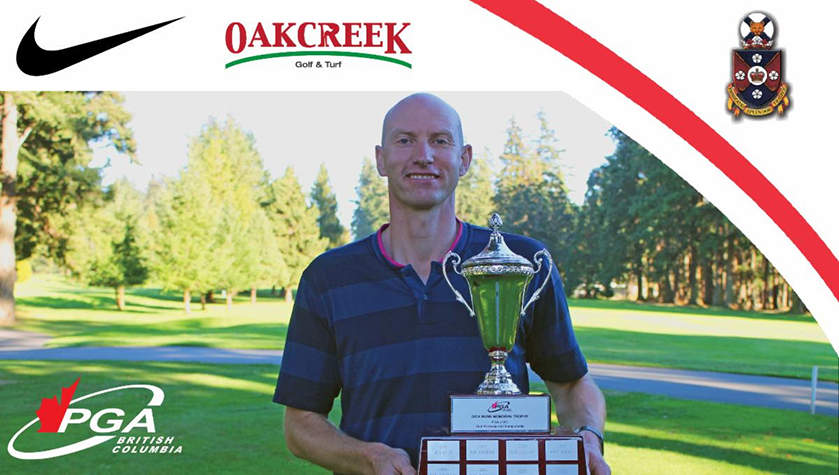 The only player to break par in the 36-hole tournament open to all Head, Executive and Head Teaching Professionals within the Association, O’Rourke’s 2-under total left him five strokes clear of co-runners-up Dave Zibrik (Point Grey Golf & Country Club) and Jesse Crowe (Overlander Golf & Events Centre) as he claimed his first victory in a PGA of BC championship event.

Last year’s recipient of the PGA of BC’s Dick Munn Golf Professional of the Year Award, O’Rourke will now have his name etched on the Dick Munn Memorial Trophy and take home $2,700 for the victory.

“It feels amazing, to be honest, to be able to get my name on the trophy beside some of the names on it,” said the 38-year-old. “I haven’t played much this year and I probably didn’t come in here with a lot of expectations, really. To get the monkey off the back feels great, there’s no doubt about that.”

O’Rourke began the day tied with defending champion Brad Clapp (Ledgeview Golf Club) but quickly took command of the tournament with birdies at Royal Colwood’s second and fourth holes to open up a four-stroke advantage over the field.

Zibrik made a charge with four consecutive birdies between holes No. 5 through 8 to get within one stroke of the lead, but O’Rourke didn’t flinch, making par after par as the players chasing him fell back down the leaderboard.

“It was difficult out there for sure. I managed my ball really well. I think I hit 33 greens for two days,” said O’Rourke. “I like to pound the driver but I tried to leave it in the bag on certain occasions out there … and despite hitting a lot of greens, my swing felt a little loose but I kind of grinded it out.

“The greens are the defence here. The pin positions were very, very fair and I didn’t get in any silly situations, really. You just have to manage your golf ball really well around here and I feel very fortunate to be able to do that for two days.”

Zibrik, the 2016 winner of this event, shot an even-par 70 Tuesday to finish at 3-over for the tournament. Having finished in second place in the Club Professional Championship four years in a row, the 37-year-old established a new record for most consecutive runner-up results in any PGA of BC-conducted championship.

“It’s kind of a weird one to have,” Zibrik said of the record with a laugh. “But certainly, I’ve played pretty well in this event over the years, so I’ll take it.”

Zibrik and Crowe each earned $1,750 for their runner-up results. For Crowe, who closed with a 69 to get into the tie for second, earned his best-ever finish in a PGA of BC championship event and was excited to share the result with 13-year-old son DJ, who caddied for him both days of the tournament.

“Honestly, the goal was top five,” said Crowe, who began the final round tied for 10th. “I didn’t necessarily see T2 in the cards, but I’m very happy about it.”

Mark Kitts (Shadow Ridge Golf Club) finished fourth, as the 2019 winner of this event followed Monday’s 72 with a final-round 73 for a 5-over total. He pocketed $1,050 for the result.

A two-way tie for fifth at 6-over featured Lance McCullough (The Ridge Course at Cordova Bay) and Brian Jung (Brian Jung Golf Academy), with each player collecting $850. Jared Siminoff (Crown Isle Resort & Golf Community) carded the low round of the tournament on Tuesday – a 2-under-par 68 that moved him into a tie for seventh with Clapp, two-time Club Professional Champion Lindsay Bernakevitch (Victoria Golf Club) and Rob Tadey (Fairview Mountain Golf Club).

Though they may have at times been frustrated by its difficulty this week, competing Professionals were thrilled with the opportunity to play the historic A.V. Macan-designed course at Royal Colwood Golf Club and its tremendous conditioning.

The PGA of BC extends its thanks to host Executive Professional Winston Michell, Head Professional Rich Chlopan, superintendent Don Singlehurst and the entire team of staff and volunteers at the club for their outstanding hospitality and assistance in making the tournament a great success.

The Association also extends its appreciation to title sponsor Nike Golf and presenting sponsor Oakcreek Golf & Turf LP for their generous support and on-site presence at the event.