Three-Year Old Could Be Vancouver Island's Next Golf Star 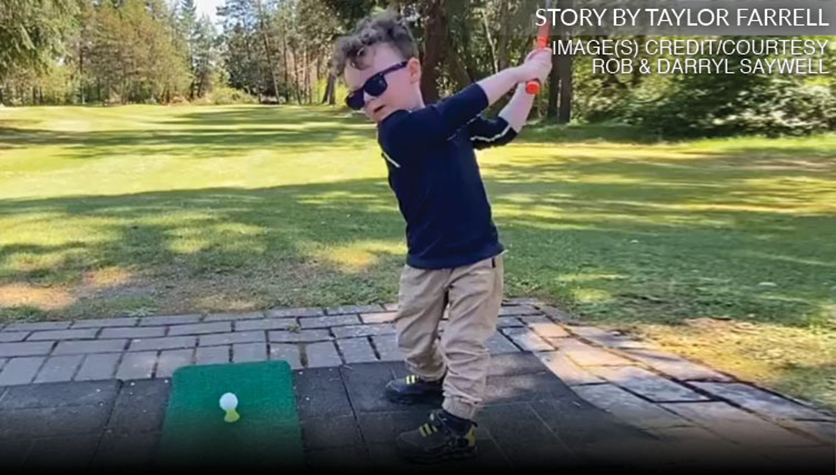 It's a typical Sunday at Nanaimo Golf Club as a member foursome prepares to tee off on the first hole, except that in this case, one member of the group is a little shorter than the others... and we mean (mostly) in height, not length.

Boston Saywell may be a toddler but the lefty, big swinging golfer loves the game and also happens to be Nanaimo Golf Club's youngest member.

Above: Boston is joined by father, Rob Saywell, and two other playing partners at Nanaimo Golf Club. Image via Instagram: @bostonsaywellgolf

Boston played his first 9 holes of golf ever at the Club last Fall at the age of two-and-a-half. He was carted around by his mother Darryl Saywell and joined by his father, Rob Saywell, VIU Mariners Coach, Mike Hrabowych, and Van Isle Golf News' Social Media Manager, Taylor Farrell. Farrell recalls Boston's swing as "remarkable", and jokes that he putts better than she does.

"Boss" first got into the game when he was gifted a set of three plastic clubs for his first birthday by his Nana. "He was immediately obsessed... it's been all he's wanted to do since!" Boston's mother told Van Isle Golf News in an interview.

When asked what his favourite thing about golf is, Boston replied, "Hitting the ball really hard!" His favourite club to hit is his sand wedge, although he loves to shout "big boom" when he hits a nice drive.

Parents Rob and Darryl are not the only ones who are getting behind this prodigy. Recently, Boston was gifted a membership for Beban Park Pitch and Putt when the owner saw him play. Originally regarded as too young to play, Boston was quick to demonstrate a skillset beyond his age-level. The gifted membership is valid until Boston turns six years old. 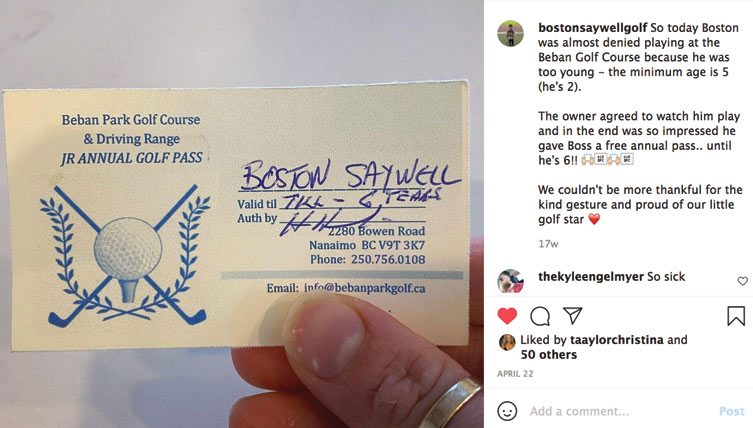 Although Boston says his favourite person to golf with is "Daddy" when asked who he most wants to play a round with he responded "Tiger Woods!" An interesting choice as Tiger became known as a prodigy at around the same age.

Boston has been getting a lot of attention on social media lately with growing Instagram and Tik Tok followings. He's also garnered attention from local media outlet Chek News where he was recently profiled.

Time will tell what the future holds for Boston. His parents are keen to support his passion and will help him grow and excel.

"The most impressive thing about Boston is his focus at such a young age... if [he] stays passionate in his love for golf then there's no stopping him," concludes mother Darryl. 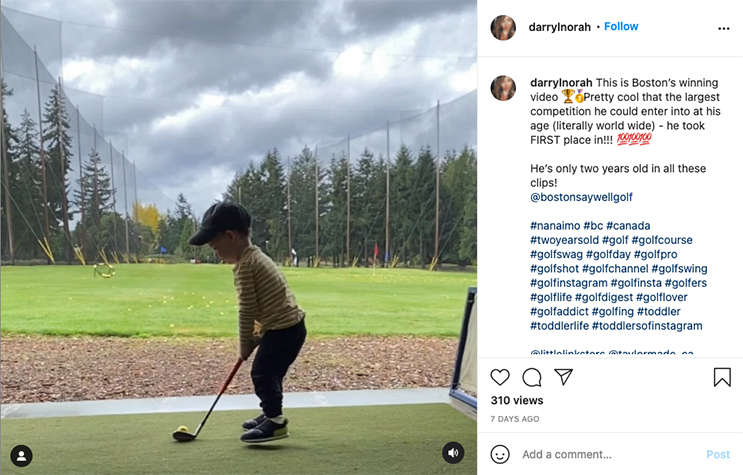