The soon to be new owner of Peace Portal Golf Course in south Surrey is a former member of Canada’s national rugby team who made his money in the automotive industry. Joe Haley also loves to golf, so when he heard his neighbourhood course was for sale, it piqued his interest.

“It is something that I have been looking at for about four years,” Haley said in an interview. “It’s this beautiful piece of land and golf course and we just decided hey, this is something that would be exciting. My business partner and I both live on farm acreages in the area, and it’s just a really exciting opportunity.”

Haley and business partner Randy Bishop, co-owner of Bocci Lighting, struck a deal to buy the course earlier this month. They take possession of Peace Portal on Oct. 4.

“I love golf,” Haley said. “I am the golfer of the two of us. I love spending time on the course. I am a big fan of golf.”

Haley has already played Peace Portal a couple of times since their offer was accepted. Like so many who have played Peace Portal in recent years, he loves the course but recognizes that many parts of its operation need to be enhanced. “We don’t have any plans to blow anything up or change anything other than to add to it and make it better,” Haley said.

The food and beverage side of the operation will definitely be upgraded and Haley said he wants the club to have a more welcoming vibe for its players. Since the COVID-19 pandemic began, the club has cut most of its food and beverage operations and closed its pro shop to players. There’s caution tape on its doors and players pay their green fees at an outside window.

“You don’t get to go inside to look at the merchandise or talk to anybody,” Haley said. “It’s not a great vibe or feeling there for me. When you go into the restaurant, which is again locked up and closed, you can get a couple of vending machine snacks, there’s not a great breakfast sandwich with a couple little capers or roasted salmon, there’s no food to speak of that would be tasty or exciting. I think it is missing some pizzaz and excitement.”

During his round this week, when the 46-year-old Haley shot an 82, he stopped at the turn and got a sandwich. “Tonight, for example, my wife had asked me 'are you home for dinner.' I said 'yeah I am, because there’s no food there.' I had a turkey cranberry sandwich. It was in one of those little plastic containers. I had that as I was playing my round. It was very sub-par and that’s it. They are not really offering anything.” 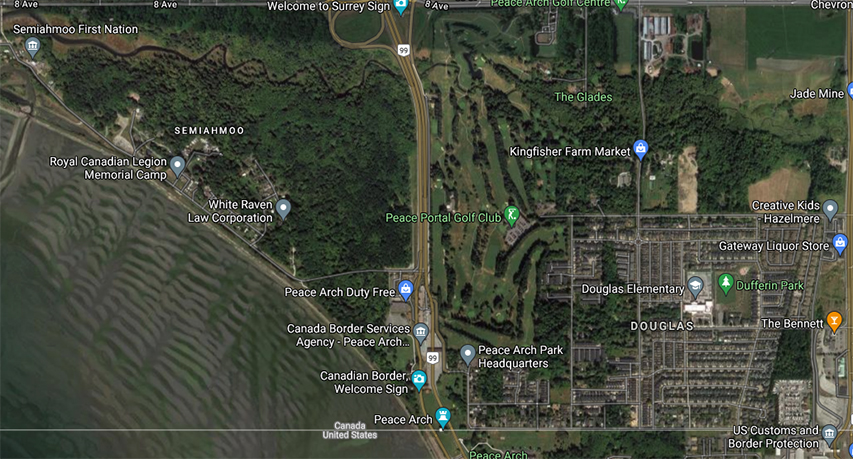 Click on image above to see Peace Portal on Google Maps

Haley grew up in the area. He attended Semiahmoo Secondary and then went on to the University of Victoria, where he played rugby for the Vikes. He was a fullback for Canada’s national side. “Then I had a pretty good sevens career,” Haley said.

“I travelled the world playing sevens for Rugby Canada and about six years after playing with Canada I came back and got into the automotive industry and I spent the last 21 years in that business. I still have a Dodge dealership in Gibsons, I sold off the one in White Rock and the one in Sechelt.”

Haley plans to meet with every employee at Peace Portal and chat with as many members as he can. He will most certainly be a hands-on owner. “I want to talk to everybody and hear their constructive criticism,” he said. “I want everybody to tell me how they feel about the course. What are the pros, what are the cons, and I think we should make a prioritized list, digest it, take a moment to breathe and then we execute how we are going to go about making the course better.”

Haley knows the course has conditioning issues. Its irrigation system is antiquated, the course doesn’t drain well and its greens are seldom in the kind of shape players expect. “There are a number of long-term members who are like, 'everything is fine the way it is, don’t change anything,'” Haley said. “That’s fine. We will keep all the history, but we want to add to it and make it exciting.

“Randy and I are both business guys and we both look at it and say we want good food, we want good atmosphere, let’s enhance this place, That’s our thoughts. Haley and Bishop are believed to have paid in the neighborhood of $30 million for the course, which opened in 1928 and is located adjacent to the Peace Arch border crossing.

Most of the property is in the Agricultural Land Reserve, although there is a sliver of land adjacent to the second fairway where limited residential development could be permitted. Haley said he and Bishop haven’t thought about what they might do with that part of the property.

“We didn’t go into this as a land thing where we are going to chop all of this up and build high-rises” he said. “That is not our game plan.”