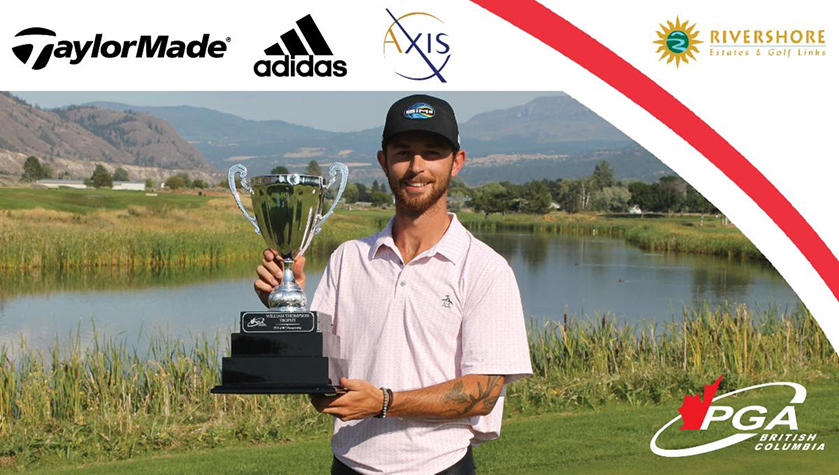 AUGUST 24, 2021 -- Chilliwack Golf Club’s Jake Scarrow staked out an early lead with a phenomenal front nine and held on for a one-stroke victory in the TaylorMade Golf & adidas Golf PGA of BC Championship presented by Axis Insurance Group on Tuesday at Rivershore Golf Links.

Scarrow’s 30 strokes on the outward nine gave him an edge on the field that he would never relinquish, as the 24-year-old’s tournament-low 65 in the final round left him at 8-under-par for the 36-hole championship, one shot better than Nate Ollis (Cordova Bay Golf Course).

“It’s definitely up there,” Scarrow said of where a PGA of BC Championship victory ranked among his accomplishments in golf. “It’s really nice to have a good ball-striking day and be able to take advantage of it, and this was one of those days for sure.”

Entering the day two strokes off the lead shared by Ollis, Parry and Cody Stewart (Chilliwack Golf Club), Scarrow took command of the tournament by playing the final six holes of the front-nine in 6-under-par, notching four birdies and an eagle on the par-5 eighth hole over that stretch.

“The putter got hot and I just hit it in some really good spots,” he said.

“I knew when I turned I had a three-shot lead … but I thought I did really well just hitting it to the middle of greens and made pars coming in. When you have the lead, that’s what you need to do.”

Scarrow earned $6,250 for the win, a championship ring courtesy of title sponsors TaylorMade Golf and adidas Golf, and will have his name etched on the William Thompson Trophy. It’s his second PGA of BC title, having won the Tournament of Champions as an amateur alongside Matt Palsenbarg (Point Grey Golf & Country Club) in 2018 when both represented The Tour LAB at Northview.

Scarrow led by as many as four strokes on the back nine Tuesday but Ollis kept things interesting right to the end while playing in the final group. After making a 40-foot putt for birdie on the par-3 17th to close the gap to two shots, Ollis had another lengthy bid for eagle on the par-5 18th that was on the perfect line but came up short by a matter of inches.

“When putts like that one on 17 go in, it’s a bit of a bonus. You’re just trying to get the speed right,” said Ollis, 28. “(On 18) I thought, ‘Just get the speed right one more time and see what happens.’ There was a split-second where I thought I’d made it, but obviously it just ran out of gas at the end.”

Ollis pocketed $4,150 for his best result in a PGA of BC individual stroke-play championship.

Olson collected yet another solid result to continue his excellent 2021 season, which included a runner-up finish at last month’s PGA of BC Assistants’ Championship. The third-place finish Tuesday was worth $3,200 for the 25-year-old.

“I just couldn’t really make enough putts out there today, I thought I had a pretty solid round but that’s how it goes,” said Olson. “Jake had a great front nine and a great round overall and that was going to be pretty tough to beat.”

CLICK HERE to view final results and earnings for the 82-player field.

A past winner of the BC Junior Boys Championship in 2015 at Osoyoos GC, Scarrow said Tuesday’s win was especially satisfying given the talent level of the field he beat out for the title.

“Nate was playing unbelievable … and the track record for Bryn is basically second to none in BC,” he said. “It felt good to get a handshake from Bryn and the rest of the guys after the round, for sure.”

With Stewart also placing among the top eight alongside Scarrow and Olson, Chilliwack Golf Club was well represented at Rivershore Golf Links this week. Scarrow said the skilled group of PGA of BC Professionals at the facility have managed to push each other to great results over the past couple of seasons.

“We’ve all been feeding off each other and it’s kind of a friendly rivalry,” he said. “We hate losing to each other, which I think is a good motivator, but we love winning. I can’t say enough good things about Chilliwack and with the guys we have there, I think we have a recipe for success.”

Rivershore Golf Links was hosting its fourth PGA of BC Championship and once again served up an exciting finish along the banks of the South Thompson River. The PGA of BC thanks Executive Professional Kevin Oates, Head Professional Kate Weir and the entire team of staff and volunteers from the club’s membership for their outstanding hospitality in hosting the event.

The Association also thanks longtime title sponsors TaylorMade Golf and adidas Golf for their support and on-site presence at the tournament, and presenting sponsors at the Axis Insurance Group for their continued patronage of the championship.