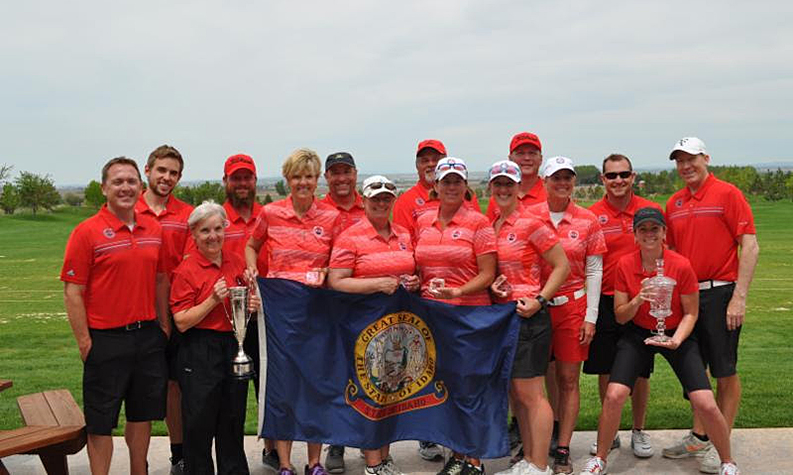 Federal Way, Wash. - Serving as the host golf association in the 12th Annual PNGA Cup held this past week at TimberStone Golf Course in Caldwell, Idaho, Team IGA ran away in the final day's Singles matches to seal their first victory in the history of the competition.

Teams WSGA (Washington State Golf Association) and BC Golf (British Columbia Golf) were tied for second after Day One, at six points each, and Team OGA (Oregon Golf Association) was one point behind the leader.

Team IGA won an astonishing 8.5 points in the final day Singles matches for a combined tally of 15 points, and pulled away from second-place finishers Team OGA and Team BC Golf, who both finished with 11.5 points, while Team WSGA compiled 10 points over the two days of competition.

Early in the final day's matches, Team IGA started to lose some ground, but when Jeff Anderson and Rod Skyles, who were the fifth and sixth matches out on the course, both won their matches for the IGA by margins of 4 and 3 each, the momentum swung back in favour of the home team. The team closed out the competition by winning three of the last five matches, with Kareen Markle sealing a 4 and 3 victory over Team WSGA's Leslie Folsom.

Each of the other teams had won the PNGA Cup at least once, so for Team IGA to win their first Cup on their home soil, it was especially gratifying for the team members.

The PNGA Cup was created in 2006 by past PNGA President Dr. Jack Lamey as a way of continuing the friendship and partnership of the region's allied associations under the PNGA umbrella - British Columbia Golf, Idaho Golf Association, Oregon Golf Association and Washington State Golf Association.

The annual Ryder Cup-style competition is held on a rotating basis throughout the four Associations under the PNGA umbrella, with this year's event being held in Idaho and hosted by the Idaho Golf Association. This was the third PNGA Cup held in Idaho.

The two-day competition includes four-ball and foursome matches the first day and singles matches on the second and final day. With three matches for each player, the championship allows each competitor to compete against players from each of the other associations. With both men's and women's scores used to determine the team result, it is the only known event of its kind in the U.S.

For a complete roster of this year's PNGA Cup for all four associations, please click here.