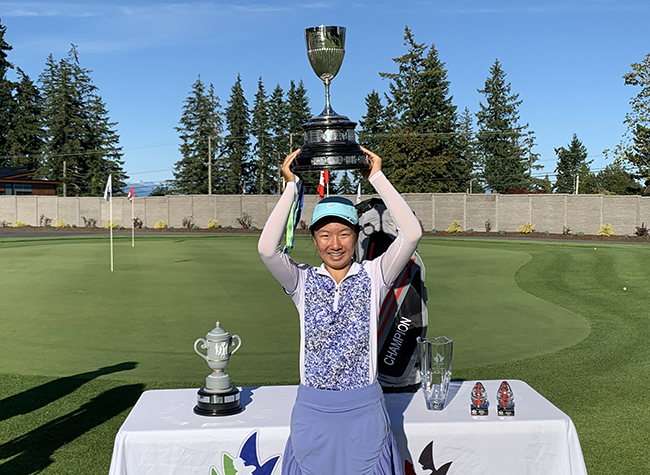 CAMPBELL RIVER -- The way it normally works is that a young player wins the B.C. Bantam Girls title and then a few years later contends and maybe even wins the B.C. Women’s Amateur Championship.

Michelle Liu had a different approach. The 13-year-old from Vancouver won both titles in a matter of eight days.

Playing like a seasoned veteran, all Liu did in the final round was register a bogey-free six-under 64 that gave her a seven-shot victory. Any questions?

Liu is the first player to win the Bantam crown and the Women’s Amateur title in the same year. She also becomes the youngest winner of the B.C. Women’s Amateur Championship. “This was definitely a pretty good round,” said Liu, who has clearly also mastered the art of understatement.

“I had a lot of stuff that just happens when it's your day. I made a lot of medium-length putts, I holed it out of the bunker for eagle on No. 15 which was very cool.”

We probably should have seen this coming. Liu, who is entering Grade 9 at Crofton House school and plays out of Shaughnessy Golf & Country Club, has been playing very good golf and beyond her years for some time.

She has won on the American Junior Golf Association Tour and made headlines last summer when she qualified to play in the LPGA Tour’s CP Women’s Open as a 12-year-old after being low Canadian at the Canadian Women’s Amateur. 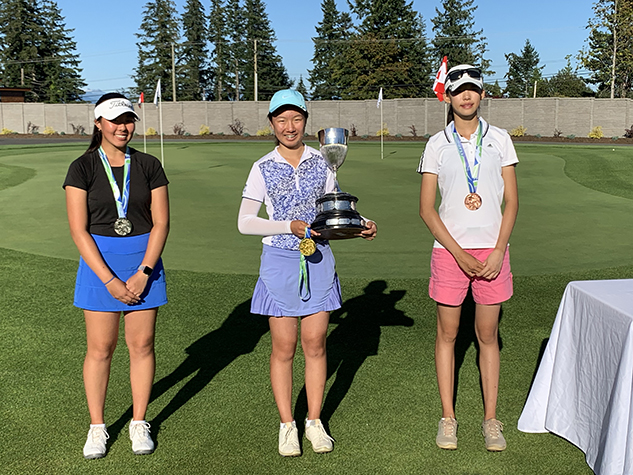 She started the final round Thursday tied at even-par with 15-year-old Lauren Kim of Surrey. Liu took charge right from the start. She drained a 20-foot putt for birdie on the first hole, where Kim three-putted for bogey. She quickly had a two-shot lead and never looked back. “It was a bit of a slider and making that putt was instrumental, I guess,” Liu said. “It got me rolling.”

Liu followed that birdie with a great up-and-down for par on the second hole. “I made a lot of up-and-downs today. I wouldn’t say my swing was perfect. But I would say that my short game and putting was on point.” Liu said she didn’t realize she was bogey-free until someone mentioned it to her right after her round.

“Winning this tournament obviously means a lot,” Liu said. “It’s the Women’s Am. There were lots of really good players here. I think I was really able to show up today and that is really fun.”

Kim, meanwhile, did not have much fun on the front side, where she was three-over. But she bounced back nicely to go two-under on the back side and salvage a one-over 71. She missed a hole-in-one by inches on the par 3 18th hole. “It was like two turns of the ball short,” Kim said. “Today is a little disappointing, but it’s something for me to work on and think about and not repeat in the future.

“Michelle played great today and there wasn’t anything I could do to stop her. I felt pretty good about my back nine.”

Luna Lu of Burnaby finished alone in third place at six-over par and joined Kim and Liu on the B.C. team that would normally advance to play in the Canadian Women’s Amateur. That event, unfortunately, was cancelled because of the COVID-19 pandemic.

The B.C. Women’s Mid-Amateur Championship for players 25 and over was held in conjunction with the Women’s Amateur and Vancouver’s Nonie Marler won the title by eight shots. It is the second provincial Mid-Amateur win of the summer for Marler, who earlier won the Ontario Women’s Mid-Amateur. “I am collecting provincial Mid-Ams,” Marler, a Marine Drive Golf Club member, said with a laugh. “It was kind of unexpected but at the same time exciting.”

Marler began the day five shots out of the Amateur lead and had her sights set on trying to contend for that title on Thursday. “I wasn’t even thinking of that (the Mid-Am) today,” she said. “I wanted to compete in the Am and that was my goal today so I am probably more frustrated than anything about that and not being able to put myself in contention. Nothing went my way today, but that’s golf.”

Marler closed with an eight-over 78 to finish at 13-over par. Multiple B.C. champion Christina Proteau of Port Alberni was second.

A two-woman best-ball championship was held in conjunction with this week’s championships. The team of Michelle Liu and Anna Huang of Vancouver won with a 54-hole score of 11-under par. That was three shots better than the teams of Luna Lu and Bonnie Zhai of Surrey and Chelsea Truong of Victoria and Jennifer Gu of West Vancouver.

CHIP SHOTS: Liu and Marler are both in the field for the Vancouver Golf Tour’s Vancouver Open, which runs Friday through Sunday at the three City of Vancouver courses.