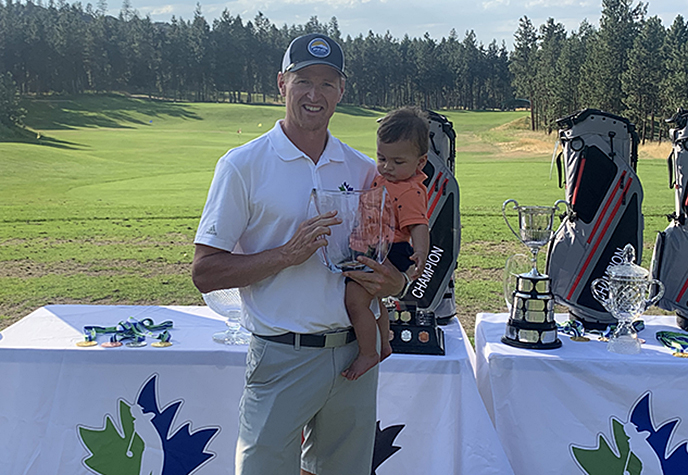 Dan Swanson, Seen Here Holding Two Trophies - One Being His Son Jack,  Picked Up Both The Mid-Amateur And Mid-Master Titles In The BC Amateur - image credit Brad Ziemer/BC Golf

KELOWNA -- Dan Swanson got what he came for when he successfully defended his B.C. Mid-Amateur Championship at Okanagan Golf Club’s Bear Course.

He also came tantalizingly close to adding what would have been a very big bonus.

Swanson, a 41-year-old former pro from Abbotsford who regained his amateur status about three years ago, made a final-round charge that fell one shot short of forcing a playoff for the B.C. Amateur Championship.

Swanson closed the 54-hole tournament with a seven-under 65 that included a mile of putts. “I probably had no business being under par after the first nine holes,” Swanson said.

“I didn’t play that great, but I putted really, really well. I don’t even know what the total footage would be, but it was a lot. There were three putts of over 40 or 50 feet today. It was just one of those rounds where the ball was just going in.”

Swanson finished the tournament at nine-under par, one shot behind B.C. Amateur winner Tristan Mandur of Duncan. The British Columbia Golf championship season was condensed this summer because of the COVID-19 pandemic. So the B.C. Amateur, Junior Boys and Mid-Amateur/Mid-Master championships were played as one event at Okanagan Golf Club.

Swanson won the Mid-Amateur title, for players 25 and older, last year at Ledgeview Golf Club in Abbotsford. He came to Kelowna hoping to defend that title, never really imagining he could compete for the B.C. Amateur crown. “Honestly, that was all that was in my head,” Swanson said.

“I didn’t think I could compete with these young guys. I am a once-a-week golfer. You have to be realistic. I was there at one point, but my expectations were very, very low. Maybe that was a good thing. I wasn’t coming in here thinking I was going to be in the hunt.” 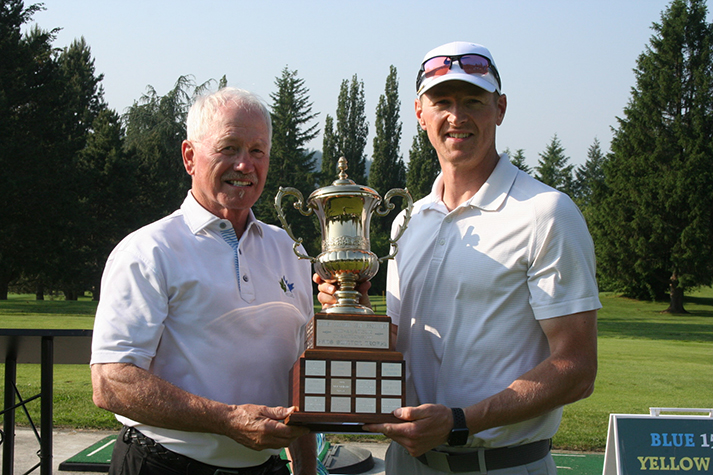 But after rolling in an eagle putt on the par 5 13th hole and adding a birdie on the par 5 15th, Swanson was tied for the lead with Mandur. Swanson, who played on the former Canadian Tour as a pro, said being in contention on the final day brought back some feelings he had not experienced in a long time.

“The juices were going, I was having flashbacks,” he said with a laugh. “I was just trying to stay in the moment because I have been in that spot so many times and come up short. I was trying to get those thoughts out of my head and I am so proud of myself for doing that. I played great down the stretch and got beat today.”

Swanson’s nine-under total won the Mid-Amateur by five shots over Jason Vanderpas of Vancouver and Brent Pound of Kamloops. Swanson also successfully defended his Mid-Master title for players aged 40 and over. He won that competition by eight shots over Patrick Weeks of Vancouver. Kelowna’s Norm Bradley was another shot back in third place.

Swanson said he seriously thought he might be done competing in the B.C. Amateur after missing the cut at last year’s championship at Big Sky Golf Club in Pemberton. “After last year’s B.C. Am I wasn’t interested in playing in another,” he said. “These kids are just at a different level than I am. I am old enough to be some of these guys’ dad.”