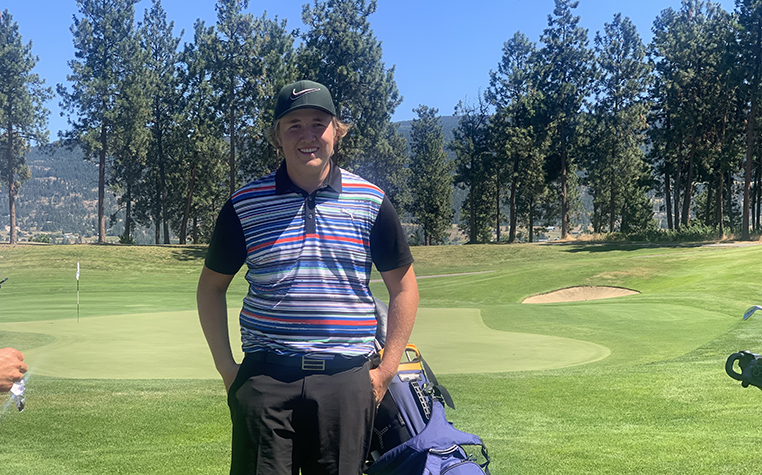 KELOWNA -- The birdies finally started flying inWednesday’s second round of the 118h playing of the B.C. Amateur Championship, setting the scene for what should be an interesting final day at the Okanagan Golf Club’s Bear Course.

Three players -- former B.C. Junior champion Tristan Mandur of Duncan, Kelowna’s Jake Towill and Brent Pound of Kamloops -- share the lead at four-under par. But they best be looking over their shoulders.

Pound, a 28-year-old who plays out of Rivershore Golf Links in Kamloops, shot a four-under 68 to grab a share of the lead. He has been in this position before and is hoping for a better result on Thursday. Back in 2018 at his home club, Pound had the lead through two rounds of the B.C. Amateur but faltered in the final two rounds and finished tied for 13th.

“It didn’t quite go my way last time, but I learned a lot from that experience at Rivershore in 2018,” Pound said. “It will be a fun day tomorrow. This is what I have been looking forward to since 2018 because I didn’t play last year.”

Pound could potentially walk off with two trophies on Thursday. Four tournaments in one are being played this week at the Okanagan Golf Club. Junior Boys (age 18 and under), Mid-Amateur (25 and over) and Mid-Master (over 40) champions will also be crowned on Thursday. Pound leads the Mid-Amateur competition by two shots heading into the final round.

Towill, a 19-year-old who plays out of Kelowna Country Club, shot a three-under 69 Wednesday that included eight birdies. “Eight ties my career record in a competitive round, but that was definitely the most opportunities I have ever had,” Towill said. “I know it sounds weird to say because I had eight birdies, but I left a couple out there.”

Towill will be joining the UBC-Okanagan golf team this fall and has become intimately familiar with the Bear Course this summer while practising with his new teammates. “I have played here probably 30 times, so it kind of feels like a home game out here, which is comforting because I know a lot of the shots,” he said.

Mandur, who shot a five-under 67 on Wednesday, is looking to join select company by adding a B.C. Amateur title to his B.C. Junior crown. “Absolutely, that is definitely a goal of mine,” said Mandur, who is entering his senior year at the University of Utah. “I just need to stick to my game plan, play the way I can, have fun and enjoy the round.”

After playing tough in Tuesday’s opening round, the Bear Course yielded many more low scores on Wednesday. That was thanks in part to a shorter set-up.

Rothwell fired a tournament-low seven-under 65 to move to within one shot of the lead. “The tees were up and I made a couple more putts,” said the 19-year-old Rothwell, who opened with a 76 on Wednesday. “I struggled yesterday and was grinding out there. I just played a little more conservative off the tee and made a couple of putts on the front. The par 5s, especially with the tees up, are pretty easy.”

Josh Miller of Victoria, William Bishop of Victoria and Michael Crisologo of Richmond are also at three-under par. The 16-year-old Bishop leads the Junior Boys category by one shot over Jeevan Sihota of Victoria and James Swan of Esquimalt.

After finding himself three-over through four holes Wednesday, Bishop rallied and managed to post a two-under 70. “I was really proud of myself,” Bishop said. “My goal for the day after that shaky start was to get back to even and then see what I could do from there. I definitely surprised myself and put myself in a lot of better position than I was earlier in the day. I am feeling good going into the final round.”

This year’s tournament is being played over 54 holes, not the normal 72, and there is no cut.

Defending Mid-Amateur champion Dan Swanson of Abbotsford is tied for the Mid-Master competition lead at two-under par with Ryan Mulhern of Vancouver. Both players shot two-under 70s on Wednesday. “To be honest it was kind of a stress-free round,” Swanson said. “I didn’t have to struggle for par much. I just didn’t make  any putts.”

The winners will have to handle the heat in more ways than one on Thursday. In addition to the pressure of playing for a championship, players will once again have to deal with temperatures in the high 30s.

“It not only takes a physical toll on you, but a mental one,” said Thoroughgood, who at age 16 became the youngest winner of the B.C. Amateur in 2016. “In this kind of heat being able to stay focused on every shot is so hard.”