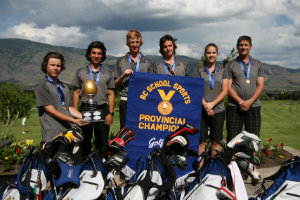 During the first round of the championship, Lu improved on his already solid start with five straight birdies on the back nine propelling him ahead of the competition.

“My heart was beating so fast on the tee box for the last three or four holes,” said Lu after his round, finally able to take a deep breath and relax.

“I didn’t know I was going to break the course record, I was just concentrating on every shot and every putt.”

His performance in addition to a solid showing by the whole Prince of Wales Secondary School team (+1); Patrick Tan, James Kim, Ashley Cai and Natalie Chu gave the team a comfortable lead for first.

Steveston – London Secondary School finished 20 strokes back of Prince of Wales to take second place in the tournament, followed by St. George’s School (+32) in third.

Curtis Chan of Steveston – London played a consistent game finishing second as an individual with an impressive 6-under (69+69=138) followed closely by Chris Crisologo (69+71=140) of Vancouver College rounding out the top three.

The team; Santiago Bouyra, Scott Lemon, Cole Morrison, Anthony Trozzo and Masato Wilson, excelled on the back nine and shot a combined three eagles in the first round. They finished +25 after two days of competitive play.

Tristan Mandur of Shawnigan Lake Secondary School took first place in the individual competition through a consistent effort, finishing 6-under (69+69=138).

Bouyra improved on his first round score finishing comfortably at second at 2-under. Ben Basran (+1) of Collingwood School and Brendan Lancaster (+1) of St. Thomas More Collegiate finished tied for third with 145.

The battle for second was close in the team competition with St. Thomas More coming out on top shooting 41-over (304+313=617) followed closely by Smithers Secondary (619) after two tough days of play in Qualicum Beach.

Selkirk Secondary School shot 625 to capture the title at the BC Sports ‘A’ Championship at Osoyoos Golf and Country Club on Tuesday.

Russell DuToit, Evan Gresty, Julia Dereniwsky, Diego Oaxaca Paulsen and Kole Toth improved during their second round, edging Immaculata School from the top spot, and combined to score 49-over to win the championship.

In individual competition, Cole Baldigara of Immaculata managed to take top honors despite some trouble towards the end of day two. Baldigara bogeyed four holes on the back nine, but had established a strong enough lead that he would still finish first as an individual.

Bulkley Valley Christian School’s Adam Veenstra (76+73=149) improved his score on the second day of competition to make a push for the lead, he finished just two strokes behind Baldigara at +5. Leading after the first round, West Point Grey Academy’s Kamayar Yamini (+8) finished third as an individual.

'A' Team Results
'A' Individual Results