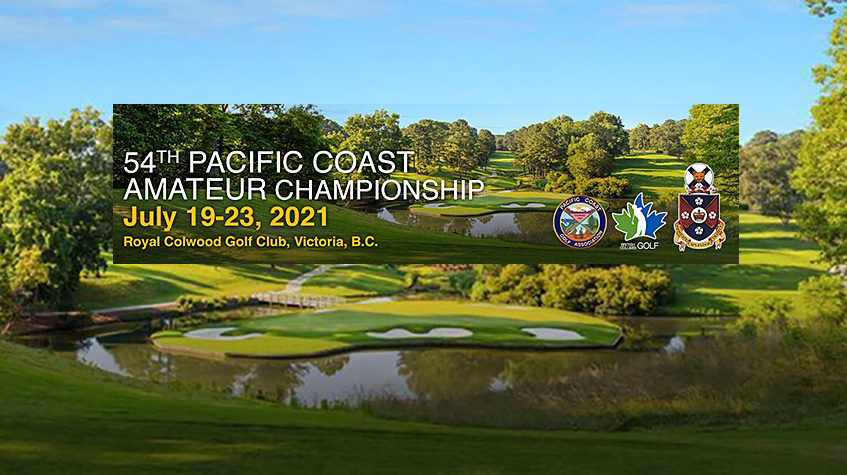 Federal Way, Wash. – Royal Colwood Golf Club in Victoria, B.C. will be the host site of the 2021 Pacific Coast Amateur Championship. The venerable club had been set to host the 2020 championship this July, but when this year’s event was canceled due to concerns about the COVID-19 pandemic, the club’s board of directors, management, professional staff and committee readily agreed to carry over as the host venue for next year.

The 54th Pacific Coast Amateur Championship, with the host association being British Columbia Golf, will be held July 19-23, 2021. This will be the second time Royal Colwood will have hosted the championship, with it previously being held there in 2008.

“It is our privilege to serve as the site of the 2021 Pacific Coast Amateur Championship,” said Mike Gibbins, club captain at Royal Colwood. “Our club is honoured to be considered and selected to host this premier competition in amateur golf. We look forward to continuing our relationship with the Pacific Coast Golf Association to promote the game of golf and host this event.”

The Pacific Coast Amateur routinely attracts players from around the world with resumés boasting illustrious victories in other jewel amateur golf events, and it remains the West Coast’s elite-level event that is circled on all amateur golf calendars in North America and around the globe. The Pacific Coast Amateur has regularly received an “A” strength ranking by the World Amateur Golf Rankings (WAGR), provided by The R&A and USGA.

Most recent champions include Aaron Wise (2015), Will Zalatoris (2016), Doug Ghim (2017), Isaiah Salinda (2018) and Quade Cummins (2019). Other past champions would go on to have success on the PGA TOUR, including Andrew Putnam, Michael Putnam, Jason Gore, Billy Mayfair and Ben Crane, among others.

Much of the recent success of the championship can be directly attributed to the quality of the venue.

“The rich history and championship layout of Royal Colwood makes it one of the best courses in Canada,” said Troy Andrew, executive director of the Pacific Coast Golf Association. “As it has in the past, it will do its part in identifying the best player as champion. The quality of our field and our ability to continuously recruit the game’s best amateurs is directly attributed to the reputation and quality of the venue selected to host.”

Opened in 1913, Royal Colwood has been the site of numerous regional and national amateur championships, hosting the PNGA Men’s Amateur eight times, the Canadian Amateur three times, the Canadian Senior Amateur, along with the 2008 Pacific Coast Amateur. It has also hosted professional tournaments such as the B.C. Open, Victoria Open, and Payless Open.

For more information about the championship, please visit www.pacificcoastamateur.com.

Designed in 1913 by PNGA Hall of Fame inductee Arthur Vernon Macan, Royal Colwood Golf Club is a traditional-style parkland championship course set amongst 450-year-old Douglas firs and majestic Garry oaks. World-renowned for his golf course designs, Macan is also a member of the Canadian Golf Hall of Fame. The club received its Royal designation from King George V in 1931. The present clubhouse at Royal Colwood was built in 1993, and formally opened by HRH Prince Edward, Earl of Wessex, youngest son of Queen Elizabeth II. More information can be found at www.royalcolwood.org.

ABOUT THE PACIFIC COAST GOLF ASSOCIATION