Angel Lin is the new B.C. Women’s Amateur champion, even though she is having a little trouble believing it. “Honestly, I don’t really have the words for it,” the 16-year-old from Surrey said. “It is amazing, it is an honour, it is mind-blowing. I think it will sink in on the ferry ride home. I still don’t really believe it yet.”

Lin shot the best round of the day, a one-under 71, at Nanaimo Golf Club on Friday and beat Richmond’s Alisha Lau by two shots for the biggest win of her young golfing life. Lin, who is heading into Grade 12 at Elgin Park Secondary in Surrey, finished the 72-hole event at one-over par. She played the final 36 holes in five-under.

Lin took control midway through the back nine, when Lau ran into trouble. Lau, who had no worse than a share of the lead from the first day, triple-bogeyed the par 4 15th hole and then bogeyed the par 5 16th hole. Lin played those two holes in even par and suddenly had a two-shot lead with just two holes to play.

“No. 15 was probably Alisha’s only mis-step all day,” said Lin, who had her father Ethan helping as her caddie. Lin credited him with helping keep her calm and was delighted she got to share such a big win with him.

“it was nice having my dad on the bag,” she said. “He was telling me to remember how I was feeling when I shot 68 (on Thursday) and that if I could do that everything would work out fine. That was comforting to hear and when I had some tough decisions to make, he jumped in. So it was nice to have a two-person team. He comes to practice with me every day so he knows my game pretty well. . .I think he’s like me, still in shock right now. He has got a big smile on his face.”

Lin has committed to play collegiate golf in the fall of 2020 at Boston College. She was proud of the fact that she managed to remain relatively calm in Friday’s final round. “I guess I’m most happy about over-coming the last day nervousness,” she said. “I was still a bit nervous and was trying hard not to think about it. This is the first time I have really captured something on the last day of a tournament and that’s a really good feeling for me.”

Lau, who entered the day tied for the lead with West Vancouver’s Phoebe Yue, was quick to congratulate Lin on her solid play. “It was just great, slow and steady wins the race,” Lau said. “Angel was consistent. She was there all day, so I am happy for her. It was great watching her play. I have known her for a very long time and it was awesome to see her do well.” 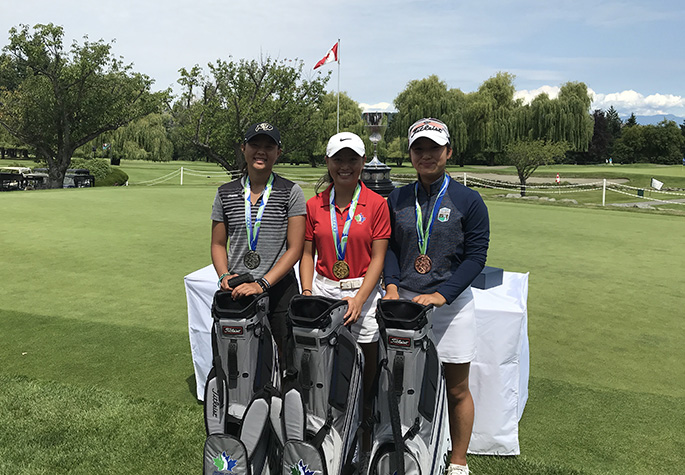 Lau insisted she was not overly disappointed with how things finished. She was playing her first tournament in more than a year after wrist surgery and was delighted she contended. “I am just kind of getting that rust off,” said Lau, who will play her sophomore season at the University of Colorado this fall. “Maybe it didn’t turn out quite the way I had hoped, but I am pretty happy with this week.”

Lau acknowledged that making a mess of the 15th hole was her undoing. “I hit it into the bunker and hit a couple of bad shots and they kind of piled up,” she said. “I actually made a pretty long putt to save that triple.”

Euna Han of Coquitlam finished third at eight-over after closing with a 73 and claimed the final spot on the team that will represent British Columbia at the Canadian Women’s Amateur Championship, which goes July 23-26 at Red Deer Golf & Country Club in Alberta.

Yue, who started the day with a share of the lead at one-over, had a tough final round. She shot a 10-over 82 and dropped into a tie for fourth spot at 11-over with Angela Arora of Surrey, Leah John of Vancouver and Amanda Minni of Delta. Defending champion Mary Parsons of Delta finished 11th at 21-over par.

The B.C. Women’s Amateur also included a two-player best-ball competition. The team of Yue and Parsons won with a score of 12-under par. That was three shots better than the team of Han and Hyeji Yang of Langley.