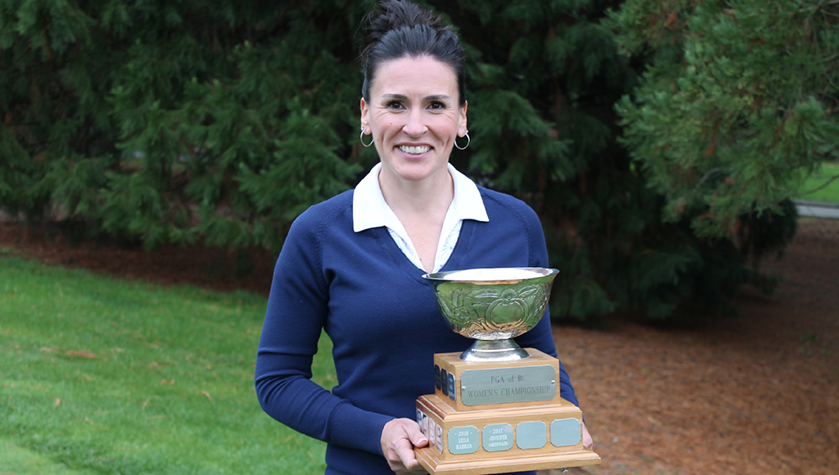 Ashley Zibrik (Shaughnessy Golf & Country Club) Holds The Trophy After Winning The PGA of BC Women's Championship Presented By Dexim Golfwear At Point Grey Golf & Country Club. The Victory Was Zibrik's Second In The event, Coupled With Her Triumph In 2012 - Image Credit PGA of BC

October 3, 2018 - VANCOUVER, BC (PGA of British Columbia) – Ashley Zibrik captured her second career title in the PGA of BC Women’s Championship presented by Dexim Golfwear at Point Grey Golf & Country Club, topping one of the strongest fields the tournament has ever seen in its return as a standalone event.

Zibrik (Shaughnessy Golf & Country Club) recorded 40 stableford points in Wednesday’s final round, making six birdies against two bogeys, to reach a total of 74 points over the tournament’s 36 holes and earn a three-point victory. Also the PGA of BC Women’s Champion in 2012, Zibrik took home $1,000 for the win.

“I just wanted to play some good golf and to shoot (a gross score of) 68 today against some phenomenal golfers in this field – former LPGA tour players, a few who are trying to still pursue a touring professional gig – I’m very excited,” said Zibrik.

Under the stableford format, players earn points on each hole for their score relative to par. A bogey is worth one point, a par earns two points, a birdie is worth three points, and so on.

Playing in the second-last group out and starting the final round three points out of the lead, Zibrik caught fire early on with three consecutive birdies starting at Point Grey’s third hole, leapfrogging to the top of the leaderboard. Three more back-nine birdies, including one at the par-5 18th to close her round, kept the title out of reach for the rest of the field.

“Today was a ton of fun. The golf course was in phenomenal shape and putts were rolling in, so I’ll give credit to the grounds crew and their team, the greens were awesome,” said Zibrik. The 34-year-old may not have as much time to focus on golf these days with a 1-year-old son at home, but she said that may have actually helped her out a bit en route to the title.

“I think when you’re a new mom you have lower expectations, so I just hit some really good shots.”

Harman earned 34 points during her steady final round, and a crucial birdie at the par-3 17th helped her secure solo second place and a $700 payday. “I was really happy with how I played,” said Harman, who last won the title in 2016. “Today was very different from yesterday. I wasn’t hitting it that great, so I was pretty happy that I just stayed in there and finished really strong.”

Kennedy, who won the Alberta Ladies’ Amateur crown earlier this year and joined the PGA of BC only a couple of months ago, posted her second-straight 35-point round and earned a third-place cheque of $550. “It was super amazing playing with some great players and great female pros, and it was a great experience overall,” the 23-year-old said of contending in her first professional tournament start.

This year marked the return of the Women’s Championship as a standalone event for the first time since 2015, and the tournament’s revival drew a significant buzz amongst the PGA of BC membership. More than half of the Professionals competing were playing in the event for a first time, including five who have joined the Association within the past three years.

“This is an important tournament,” said Zibrik. “It’s really fun to play against other women and it’s a chance for us to network and see each other. Everyone is really excited to see it back. The number of players is going to continue to grow, we think, so hopefully we keep building and building."