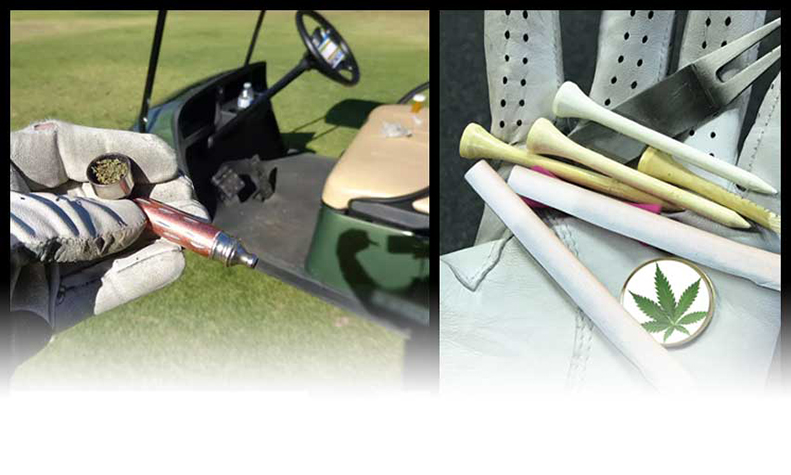 The golf marijuana survey conducted by Inside Golf and British Columbia Golf is now complete with 56 facilities and 5466 golfers responding.

- 75% of facilities currently do not have a marijuana policy in place.
- 60% are likely or very likely to allow marijuana use on their course.
- 53% plan to have a policy similar to that for tobacco and cigars.
- 32% plan to modify their golf cart policy to take marijuana into account.
- 27% would consider selling marijuana if allowed.
* Access to full survey results to Clubs and Club Managers available on request.
GOLFER SURVEY KEY FINDINGS & HIGHLIGHTS*
*5466 golfers responded: 63% are members at a club; 37% are daily fee players; 97% are from BC, 3% from Alberta; 85% of respondents are aged 55+.
Key Findings
- Overall, one-in-seven golfers (both daily fee and club members) plan to smoke marijuana on the golf course.
- This rises to one-in-two for those under the age of 35 and drops to less than one-in-ten for those 55+.
- Overall, six-in-ten golfers are uncomfortable with anyone smoking marijuana on the course.
- Being comfortable being paired with someone smoking marijuana on the golf course declines in a straight line as age increases (<35: 75%, 35-54: 50%, ≥55: 25%).
- Eight-in-ten golfers who are members at clubs would like to have input into decisions regarding marijuana use at their club. This rises to 88% for those planning to smoke.
- Three-quarters of golfers do not think that marijuana should be smoked within viewing distance of junior players.
- Almost nine-in-ten of those planning to smoke marijuana on the course view it as the same as drinking alcohol or smoking tobacco/cigars as compared to only six-in-ten for nonsmokers. 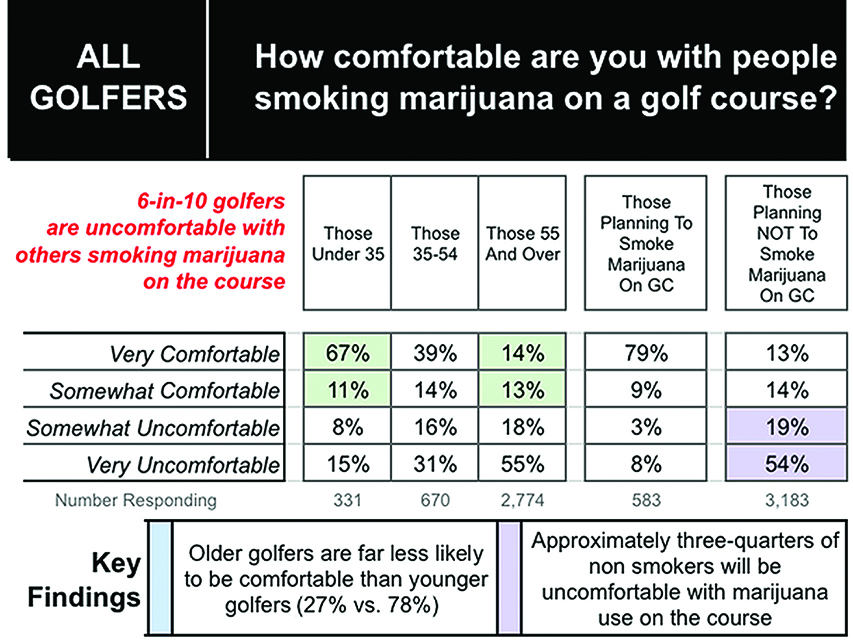 In-Depth Articles summarizing and analyzing results can be found at these links:
- Overview Article About Marijuana Use On The Golf Course:  https://issuu.com/igdesignpublishing/docs/ig1808-bci_vi/10
- Survey Results Article:  https://issuu.com/igdesignpublishing/docs/ig1808-bci_vi/12
These articles can also be found in the current print version of Inside Golf magazine and upcoming issue of BC Golf's digital magazine, The Scorecard; PDF versions for distribution to club memberships are available on email request.
Full Survey Results can be found at the links below:
- For All Golfers: https://docs.google.com/spreadsheets/d/1cHz6mh_b7--9tlb_bjcdh-VTpkrOzb7P5BjBYJXLTbk/edit?usp=sharing
- For Club Members Only: https://docs.google.com/spreadsheets/d/1PJA5KKSRk8ya3l6m2vn2Du9AxEymEPItq9SaLW2Ar2M/edit?usp=sharing
For more information, please contact Jeff Sutherland
Publisher & President, INSIDE GOLF Inc.
publisher@insidegolf.ca