Border No Barrier For Jacob Koppenberg At B.C. Amateur 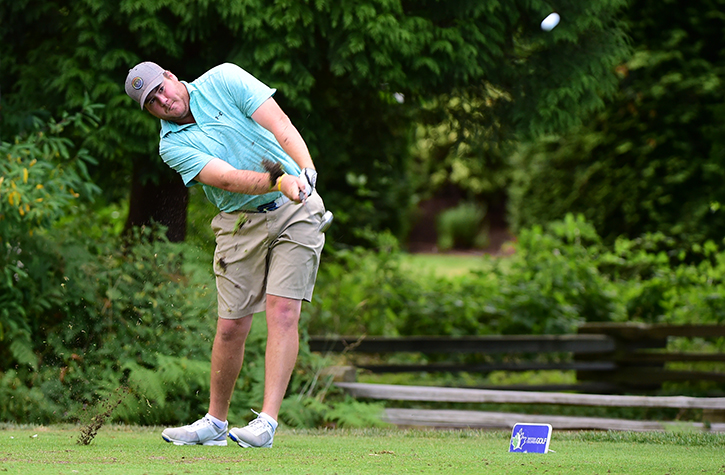 All Jacob Koppenberg needs is a Nexus pass and he’ll be all set. Crossing the border to get to Morgan Creek Golf Course has been about the toughest part of the first two days of the B.C. Amateur Championship for Koppenberg, a 30-year-old Bellingham resident.

Actually, that hasn’t been bad, either. “I was maybe 10 minutes going home last night and I was the only car going through this morning,” Koppenberg joked after he grabbed the lead at the halfway point of the 115th playing of the B.C. Amateur. “This feels just like home. I'll have to start playing up here more often.”

Koppenberg fired a five-under 67 in Wednesday’s second round to move to nine-under through 36 holes. He has a one-shot lead over Jake DuVall of Victoria. Koppenberg’s only bogey came on the par 4 11th hole, but he followed that up with three straight birdies and then eagled the par 5 17th hole for the second straight day. “It was a pretty drama-free round,” he said.

DuVall, a 23-year-old who played his collegiate golf at Southwest Oklahoma State University, played in the final group of the day and matched Koppenberg’s 67 to move to eight-under. “I had another good start today,” DuVall said. “I made a good up and down out of the bunker for par on 10 (his first hole) and that kind of settled me down,“ DuVall said.

“I had a good drive on the par 3 13th and hit a good 6-iron to about 25 feet and rolled it in for eagle. . .it was pretty stress-free again today, just keeping it in play, hitting fairways and greens and giving myself a lot of chances to make birdies.”

DuVall doesn’t think he will be bothered by being in contention. “I think I was tied for fourth through two rounds last year at this tournament so it is something that I am comfortable with and something I look forward to.” Koppenberg played in Monday’s supplemental qualifier at Northview Golf Club’s Canal course to earn a spot in this week’s field.

He is trying to get his game in shape after recently qualifying for next month’s U.S. Amateur Championship. “I've got this one and the Washington State Amateur coming up,” he said. “I figured these two tournaments should kind of at least give me an idea of where the ball is going.”

Right now, the ball is going right into the hole and Koppenberg hopes that continues over the final two rounds. “I'm guessing the course is going to get tougher,” he said. “I just assume they'll start putting some of the tees back and get the pins a little tougher. Now I'm familiar with the golf course and I know the holes where I have to hold back on and the ones I can kind of go for. I think I just want to keep the foot down and keep going.”

Koppenberg played his collegiate golf at Western Washington University and graduated in 2010. He turned pro for a while, but regained his amateur status. He and his wife Camille are expecting their first child, a boy, in January.“ Life is about to change,” he said with a smile. “I have to get my golf in now.”

Ian Kim of White Rock and Jeevan Sihota of Victoria share third place at six-under par. Kim shot a two-under 70 Wednesday, while the 13-year-old Sihota fired a four-under 68. Sihota made seven birdies Wednesday and two of them came via chip-ins from off the green on the third and fourth holes.

He finished his round by stuffing a 7-iron from 158 yards to within inches of the cup on his final hole, the par 4 ninth at Morgan Creek. Sihota won the Future Links Pacific title this past spring and last week finished second at the IMG Academy Junior World Championships in Carlsbad, Calif.

He insisted he won’t feel any real pressure being in contention to start Thursday’s third round.“I have been in these situations lots of times and I just have to try and do the same thing tomorrow,” he said. “I just have to go out and execute.”