Chris Crisilogo didn’t have his 'A game' Tuesday, but it was still good enough to grab a share of the first-round lead on what is a crowded leaderboard at the B.C. Amateur Championship.

The Simon Fraser University standout had to do his fair share of scrambling to record a four-under 68 at Morgan Creek Golf Course in Surrey that left him tied for the lead with SFU teammate Scott Kerr of Vancouver, Ian Kim of White Rock, Victoria’s Mac Keats, Taylor Durham of North Vancouver and Jacob Koppenberg of Bellingham.

“I hoped to get a little more out of the round, but I have been struggling with my ball-striking for the last bit,” said Crisilogo. He had his moments Tuesday, like when he chipped in for eagle on Morgan Creek’s par 5 second hole.

But there were other points where he found trouble. Crisilogo had to take an unplayable on the par 4 fifth hole and that led to one of his two bogeys on the day. “I just grinded it out and tried to post a decent number,” he said.

Crisilogo entered the tournament -- the 115th playing of British Columbia’s premier amateur event -- as one of the clear favourites. It is a tournament he desperately wants to win and this may be his last chance as Crisilogo could turn pro next spring when he completes his collegiate career at SFU.

“There are a lot of good players in the field and you just try to put yourself in a spot that gives you a chance to win the tournament,” Crisilogo said. “That's what everyone is looking for after day one, day two and day three. The course is playing fair. It's in awesome shape, the ball is rolling true on the greens. There is nothing to complain about on the golf course.”

The 20-year-old Kim has been playing out of Morgan Creek the last while and he used that home course advantage to effectively navigate his way around the Tom McBroom layout. He had six birdies and two bogeys in his round. “I think I was just able to stay out of trouble for the most part,” said Kim.

“I didn’t hit crazy good shots, but I didn’t put it in the wrong places and we made some smart decisions out there. I didn’t really make anything outside about 20 feet. I was solid. I didn’t miss anything that was close, but I could have made a lot more putts.” 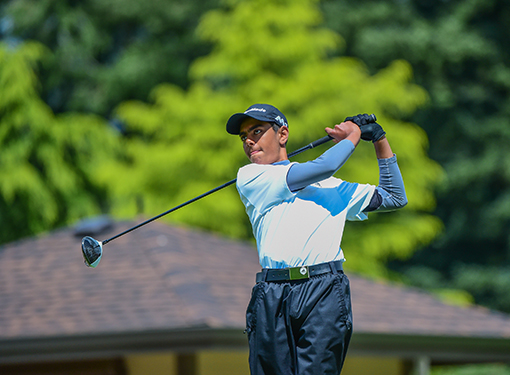 Kim, a graduate of Earl Marriott secondary in White Rock, just completed his first year at the University of Michigan. He transferred there after two years at the University of Idaho. “There were lots of highs and lows,” Kim said of his first year at Michigan. “I went from winning a college event to basically coming dead last. But I learned a lot about myself, how to handle myself in certain situations and how to overcome certain errors that I make on the golf course.“

I finished the school season pretty poorly. But I felt like it was all there and I just had to put the pieces together. I work with (instructor) Brett (Saunders) here at Morgan Creek and working hard on getting my swing more sound and knowing my misses and how to overcome them.”

Keats, a 24-year-old who just completed his studies at Camosun College in Victoria, posted his round late in the day. “I got off to a great start birdieing my first hole, which was the (par 4) 10th and is one of the tougher holes out here,” Keats said. “I didn’t hit driver or 3-wood all day. I just hit 2-iron and I hit all 14 fairways today. I hit a lot of greens because of that and made a lot of putts.”

Koppenberg, 30, had a roller-coaster first round that included four birdies, four bogeys and two eagles. “It was an odd round,” he said. “A few too many bogeys.” Kerr, a 20-year-old who has just started his collegiate career at SFU, made eight birdies in his round that started with a double-bogey.

Durham, a 23-year-old recent BCIT graduate, was playing in the final group of the day. He had five birdies and bogey in his round. Like Crisilogo and Kerr, he is a member at Marine Drive Golf Club.

Kaleb Gorbahn of Smithers, Jake DuVall of Victoria and Trevor Yu of Vancouver are just one shot back of the leaders after opening with three-under 69s. Gorbahn, who is heading into his his senior year at the University of Nevada-Reno, hit 17 of 18 greens but bogeyed both of the par 5s on Morgan Creek’s back nine (his front side).

He rebounded with four birdies for a 32 on the front side. DuVall, a 23-year-old who played his collegiate golf at Southwest Oklahoma State University, shot a 32 on the back nine to record his 69.

“I had a good early birdie on 10 on the back where I hit it to a foot,” DuVall said. “That kind of got me going in a bit of a  rhythm. I had another tap-in on the par 5 13th and chipped in for birdie on 16. And then the (par 5) 17th was pretty short so I had 7-iron in for my second shot and I two-putted for birdie. It was a good start to the tournament.”

The best nine of the day was shot by 13-year-old Jeevan Sihota of Victoria, who toured the back side in 31 shots. He made six birdies -- including five in a row -- and one bogey on the back nine. “I hit two in the water and just couldn’t get anything to go,” Sihota said of his 39 on the front nine.

He credited his dad, Jas, who was caddying for him, with helping him settle down. “My dad kind of calmed me down,” Sihota said. “He said 'we’re still in this, we can go low on the back nine.' So that’s what I did. I hit a bunch of great shots and made a bunch of nice putts. I left a couple out there but that’s okay.”

Sihota, who won the Future Links Pacific Championship this past spring at Chilliwack Golf Club, finished second in his age category last week at the IMG Academy Junior World Championships in Carlsbad, Calif.

Vancouver’s Doug Roxburgh, the 13-time champion who is playing in his 51st B.C. Amateur, opened with an even-par 72.

CHIP SHOTS: Twenty players in the 155-man field broke par in Tuesday’s first round. . .The field will be cut to the low 70 and ties after Wednesday’s second round.