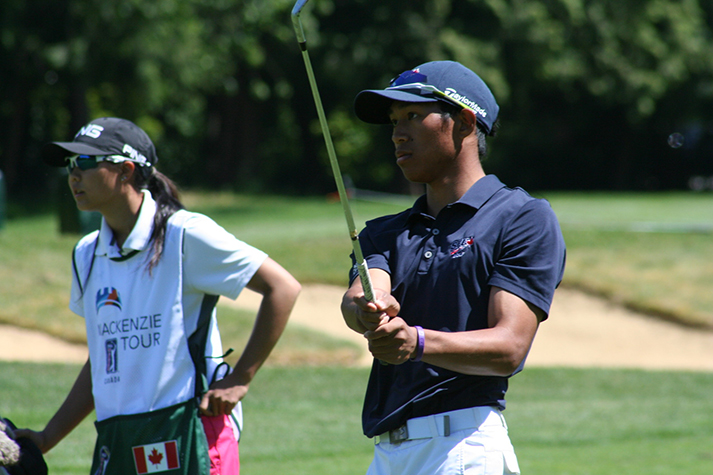 Richmond's Chris Crisologo, Seen Here At The Freedom 55 Financial Open With 2017 BC Junior Girls Champion Alisha Lau As His Caddy, Has Qualified For The 2nd Straight Year To Play In The U.S. Amateur Championship - Image Credit Bryan Outram/British Columiba Golf

If there is such a thing as a bittersweet top 10 on the PGA TOUR, Abbotsford’s Nick Taylor experienced it on Sunday. Taylor finished tied for ninth at the Greenbrier Classic in White Sulphur Springs, WVa. It was Taylor’s fourth top 10 in what has been a terrific year for the 29-year-old.

Early on the back nine on Sunday, Taylor was inside the top four and in position to grab one of those spots and challenge for the tournament lead. But a stretch of three bogeys in four holes dropped him out of contention.

It was a good week for Canadians at the Greenbrier. David Hearn (T14) and Mackenzie Hughes and Graham DeLaet (both T20) all finished inside the top 20.

TWO IN A ROW: Richmond’s Chris Crisologo is heading to the U.S. Amateur Championship for the second straight year. Crisologo, who just completed his junior year at Simon Fraser University, was the medallist at a U.S. Amateur qualifier last week at the Rope Rider course at the Suncadia Resort in Washington. He finished the 36-hole event at four-under par. The U.S. Amateur goes Aug. 14-20 at Riviera and Bel-Air Country Clubs in Los Angeles.

AMATEUR HOUR: Richmond Country Club is the site of a U.S. Women’s Amateur qualifier on July 17. Two spots into the tournament, scheduled for Aug. 1-7 at Rolling Green Golf Club in Springfield, Pa., will be up for grabs.

SECURES STATUS: A tie for 45th place at the Players Cup in Winnipeg has locked up conditional status for Kimberley’s Jared du Toit for the remainder of the Mackenzie Tour-PGA Tour Canada season. The Mackenzie Tour did its first reshuffle of the season following the Winnipeg event and du Toit earned conditional status as a result of making the cut in his first three events as a pro and being inside the top 60 on the current money list.

Vancouver’s Ryan Williams tied for sixth in Winnipeg, finishing at eight under par. That was seven shots behind winner Kramer Hickok of Austin, Tex. Vancouver’s Stuart Macdonald aced the seventh hole in Sunday’s final round. Macdonald fired a one-over 72 and finished in 65th place at eight-over par.

CAREER BEST: To say it had been a tough 2017 season on the Symetra Tour for Kelowna’s Megan Osland would be something of an understatement. Osland hadn’t cashed a cheque in 10 starts this year, but finished a career-best tied for 14th Sunday at the Donald Ross Centennial Classic in French Lick, Ind. Osland earned $3,038, almost matching her career earnings of $3,097 heading into the event.

TOP 25 FOR KWON: Kevin Kwon of Maple Ridge was the low British Columbian at last week’s Sahalee Players Championship in Sammamish, Wash. Kwon finished tied for 22nd at 11-over par. That was 14 shots behind winner Sahith Theogala of Chino Hills, Calif. Lawren Rowe of Victoria tied for 45th and Coquitlam residents Henry Lee and A.J. Ewart tied for 49th and 52nd respectively.

On the boys’ side, Callum Davison of Duncan finished in fourth place at four-over par. That was nine shots behind winner Ryan McMillan of Winnipeg. Davison was one of six players to earn exemptions into the Canadian Junior Boys Championship, which goes July 31-Aug. 3 at Cataraqui Golf & Country Club in Kingston, Ont. The Future Links Western Championship goes this week at Fernie Golf Club.

CHIP SHOTS: Abbotsford’s Adam Hadwin dropped by Ledgeview Golf Course on Sunday to conduct a clinic for the club’s junior members. Hadwin is off until next week’s Open Championship at Royal Birkdale. . .Longtime Nanaimo Golf Club pro Kerry Davison is retiring on Sept. 30. A retirement party for Davison, who has been Nanaimo’s head pro for 35 years, has been planned for Aug. 30. For more information, call 250-750-2451, extension 723. . .Victoria’s Jim Rutledge won the 65th playing of the Cowichan Open. It was his fourth win at the tournament.