Zalli Hangs On, Hayashi Charges Back In BC Bantam Boys' & Girls' Championships At Bowen Island GC 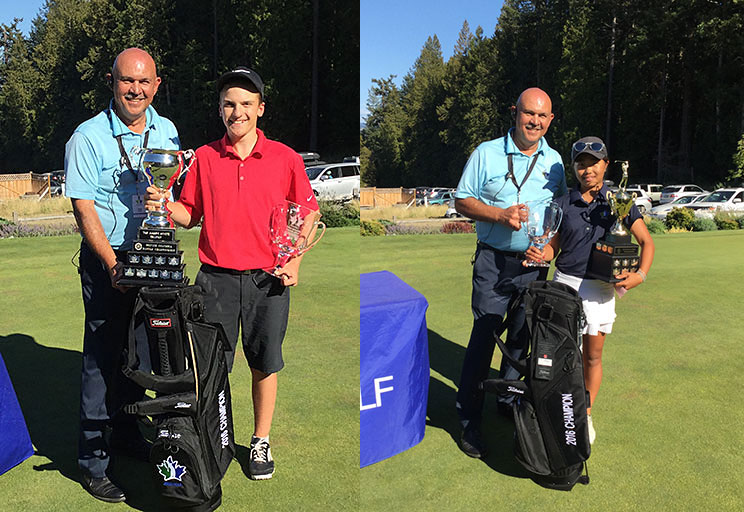 It was a tale of two different days for the two winners in the 2016 British Columbia Golf Bantam Boys' & Girls' Championships held at picturesque and often demanding Bowen Island Golf Club.

The 9-hole course provided plenty of challenges for the young competitors in the 14 & under competition. First round leader in the Boy's division, Vancouver's Ilirian Zalli, was a little more conservative in round two on the heels of his course record-setting 63 as he settled for a 4-over 74 but it was still good enough for a three shot win over Markus Yiu, also from Vancouver.

Victoria's Akari Hayashi rebounded from an opening round 6-over 76 to record the only under par round in the tournament by the girls at 1-under 69 and a 7-shot win over her closet competitor, Claire Lovan of Surrey.

Zalli said he, "Felt the pressure," when playing partner/competitor Leo Harper of Burnaby closed to within two shots on the front side after back-to-back birdies on 7 and 8. Zalli's cushion was somewhat restored when Harper bogied 10 and 11 while Zalli was able to par 10 and birdie 11 to get back to a comfortable 5-shot lead.

Still, things may have gotten a little tight around the collar for Zalli, who plays out of Richmond Country Club, when he double-bogied the par 3 13th to let Harper back within 3 shots with 5 holes to play, including the reachable par 5 16th.

Both Harper and Zalli were capable of hitting the 478-yard downhill hole with their 2nd shots, but brimming with confidence Zalli playfully announced to his two competitors, Harper and Surrey's Kyle Chang (the 4th member of the group, Victoria's Jeevan Sihota withdrew after 9 holes citing a sore knee), that, "I'm going to birdie this hole, whether you guys like it or not."

He may have just barely cleared the ravine that guards the front of the hole but he smoothly got the ball up and down for the promised birdie result. Asked about that after the round a broad smile crossed the new champion's face as he explained, "Yeah...yeah, I really needed that one. I had a stretch of a few holes where I was a little bit down, so the birdie there really boosted me for the last couple of holes to finish strong."

As it turned out both Zalli and Harper made a birdie on that hole but by following through on his promise, Zalli kept the distance he needed between the two and a quietly spectacular par from a very difficult sidehill, downhill lie 186 yards out on the final hole gave him that strong finish he desired. A perfectly played 8-iron provided a simple two putt par from about 12 feet for Zalli and he'd done enough for the win.

Staying with 'quietly spectacular' it was Markus Yiu's 3-under 67, the only under par round of the final day in the Boy's division, which could have blindsided Zalli. But it ultimately was only enough to provide Point Grey GC member Yiu with the silver medal as runner-up in the Boy's Bantam tournament.

Uplands GC member Akari Hayashi picked up her first win in a BC Golf Championship event after serving notice for the last couple of years that the now 13-year old was going to be a force on the girl's circuit.

After starting rather slowly with a 6-over par first round she got back to her steady game in round two and relied on her iron play which was truly evident in how she took on the 6 par 3's on the course playing them in 4-under par to help offset three bogies. She certainly felt that she hadn't taken full advantage of her strong iron play as she explained, "I missed a lot of birdie putts, especially on the back nine."

Hayashi who is going into grade 9 at Mount Douglas Secondary in Saanich, is happy to finally be in the winner's circle as she said with a chuckle, "Yeah....I've been second for a while." Claire Lovan who plays out of Eaglequest Coyote Creek in Surrey overtook first round leader Chaewon Baek to stand alone in second spot at 12-over (152).

Baek was one shot behind Lovan for the bronze medal with Vancouver's Angela Zhang taking 4th place at 17-over (157). In a T5th were West Vancouver's Jennifer Gu and Surrey's Alyssa Chang at 27-over (167).

In the concurrently held Novice Boy's division, first round leader Xander Bankes of Rossland held on to defeat North Vancouver's Nic Wrixon by one point, 85-84 in the Stableford point scoring system. In a T3rd and receiving the bronze medals were Jordan Harvey of Nanoose Bay and Parksville's Jagre Knight with 81 points each.

The 2016 BC Bantam & Novice Championships will be held at a venue yet to be confirmed. An announcement will be forthcoming as soon as that is determined.