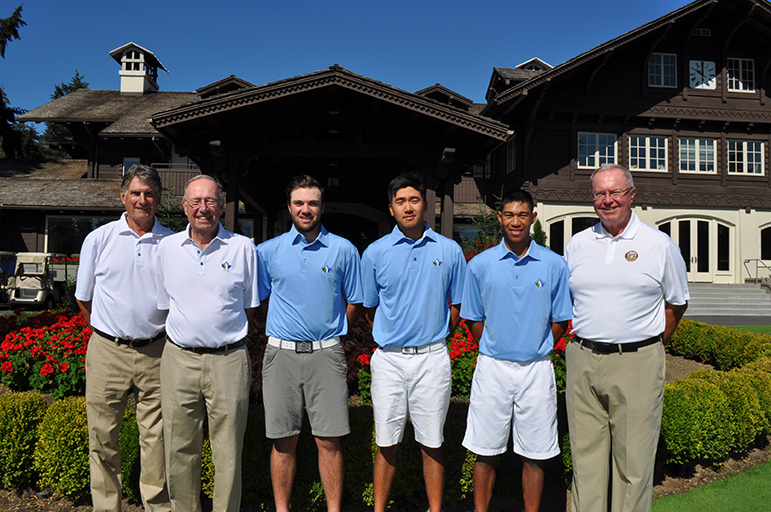 A world-class roster of amateur competitors will be taking part in the 72-hole, four-day stroke play competition in the hopes of raising the Dr. Ed Updegraff Trophy as champion. Without a defending champion, following Aaron Wise's departure to the professional ranks, the trophy and accolades coupled with victory are up for grabs.

"Seattle Golf Club is going to be a fantastic venue for our 50th year," stated Troy Andrew, executive director of the Pacific Coast Golf Association, the organizing body for the championship.

"The club has been preparing with vigor over the last number of months before we arrive. The generosity of their membership and the professionalism of their staff have been truly first class throughout the planning stages of the event. Not only are we excited to see the 50th event in our history get underway but I think the Club is just as excited to see their picturesque property hold up against the world's best amateurs."

The field is headlined by 2015 Trans-Miss champion Collin Morikawa of La Canada-Flintridge, Calif., the World No. 1-ranked amateur according to Scratch Players World Amateur Ranking. Morikawa, a sophomore at UC-Berkeley, has quickly shot up the world rankings since finishing T27 at the Pacific Coast Amateur in Eugene one year ago.

Not to be forgotten as an early favorite is two-time Trans-Miss and U.S. Junior champion Will Zalatoris of Plano, Tex. Playing in the Pacific Coast Amateur for the second consecutive year, the Wake Forest standout ranked 13th by Scratch Players is hoping to build off an impressive T4 showing in last year's championship to add another title to his growing résumé.

Included in the field are 3 British Columbians, Richmond's Chris Crisologo - who just this past week qualified for the U.S. Amateur by winning the qualifier held at his home club, Marine Drive GC, Kevin Kwon of Maple Ridge and Vancouver's Stuart Macdonald. The three will also make up Team British Columbia in the Morse Cup Team Competiton.

Originally Kimberley's Jared du Toit was to be a member of the BC Team but he received an exemption into the RBC Canadian Open in Ontario this week and the travel was going to be extremely difficult. So far du Toit is acquitting himself very well as he shot a 5-under 67 in the opening round at Glen Abbey and sits in a tie for third place.

The Morse Cup Team Competition has been held as part of the Pacific Coast Amateur Championship since 1967. The last team from British Columbia to claim the title was in 2013 when the event was hosted by Capilano Golf & Country Club. The team Championship, consisting of PCGA member association teams only, will be conducted over the first 36 holes.

Differing from years past, the 50th Pacific Coast Amateur has an incredibly strong international presence, with representation from seven different countries outside of North America, including Australia, New Zealand, South Africa, England, the Philippines, Thailand and the Republic of South Korea. Many players with international backgrounds sit within the top-100 in the world.

Leading the way for the international contingent is a familiar face in KK Limbhasut of Bangkok, Thailand. Limbhasut held his own on a jam-packed leaderboard of talent at last year's event, finishing 19th and is sure to be a favorite come Friday afternoon.

Other international players of note with accomplishments garnering Presidential Invitations into the field are a quartet of Australians including 2015 PNGA Men's Amateur champion Anthony Quayle of the Gold Coast, 2015 Australian Amateur champion Cameron Davis of Sydney, Brett Coletta of Melbourne and Ferntree Gully's Cameron John. There are a total of 10 players from Australia in the field.

Eight Washington residents will be competing in the field, including Andrew Whalen of Ephrata, Tom Brandes of Bellevue, Frank Garber of Kirkland, Eric Ansett of Spokane, Alistair Docherty of Vancouver, and a trio of Seattleites in Chris Babcock, Mike Wagner and Shawn McEachern. A Seattle Golf Club member, McEachern gained entry to the field by way of winning the Seattle Golf Club host qualifying spot.

Play for the 72-hole stroke play championship will begin on Tuesday, July 26 at 7:30 a.m. with practice rounds and a players' banquet being held on Monday, July 25. Play will conclude with the individual champion being crowned on Friday, July 29.

Held on an annual basis since 1967, with roots dating back to 1901, the Pacific Coast Amateur Championship boasts a rich history of showcasing some of the most talented golfers in the United States and Canada.

Past champions of the Pacific Coast Amateur who have gone on to successful professional careers include PGA TOUR winners Billy Mayfair (1987, 1988), Jason Gore (1997) and Ben Crane (1998) as well as Web.com Tour winners and brothers Michael Putnam (2004) and Andrew Putnam (2010). The last player to win at Seattle Golf Club was Ryan LaVoie in 1999.

For more information on the championship, visit www.pacificcoastamateur.com. Spectators and media are welcome to attend with entrance being free of charge.