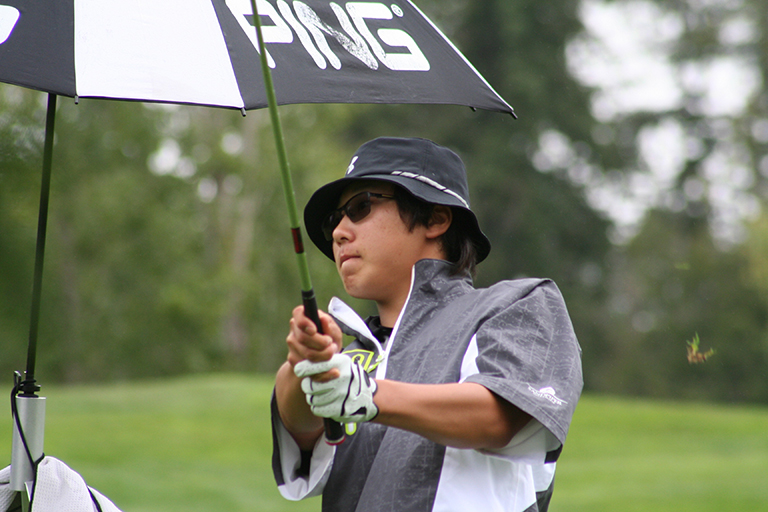 Isaac Lee Of Pitt Meadows Fired His Third Straight Round Of Even Par 70 To Tie For The Lead With A.J. Ewart Going Into The Final Round Of The 2016 BC Junior Boys Championship - Image Credit Bryan Outram

The third and penultimate round of a golf tournament is often referred to as "moving day" in many golf circles as players attempt to put themselves in a good position to contend going into the final round and of course, hopefully, win.

Thursday's round 3 at the 2016 BC Junior Boys Championship took on more of a "try-desperately-to-hang-on-to-what-you've-already-got-and-don't-fall-off-the-map day" as players searched for answers to the thick rough and the tricky greens at the Arbutus Ridge Golf Club, host of this year's championship in Cobble Hill.

To that end, it would appear that Pitt Meadows' Isaac Lee, who plays out of Swan-e-set Bay Resort, seems to have the best recipe for success so far, which would be to simply shoot par. After his 3rd consecutive round of even par 70 Lee finds himself in the final group on Friday with 3rd round leader A.J. Ewart and host club member Tristan Mandur.

Somewhat quietly playing his way into the final group, Mandur also carded an even par 70, which included three birdies to go along with three bogies. Mandur sits at 1-over for the tournament.

Following a terrific second round 64 that staked him to a 2-shot lead thanks to a bogey-free, 6 birdie round, Ewart reeled off nine straight pars to start his round and appeared to maybe finally kick-start things with a two-putt birdie on the par 5 10th hole moving him to 4-under for the tournament.

That gave him a 3-shot cushion at the time and as the others in his group, Keenan Flemming and Adam Veenstra were spinning their wheels a bit trying to make up any ground, things looked to be falling into place for the 17-year old Ewart, who will attend Arizona State University starting in the fall of 2017.

It was right about at that moment that first round leader Cameron Bourque made an eagle just one hole ahead of Ewart's group by jarring his 130-yard wedge approach shot for a 2 on the 372-yard par 4 11th. Bourque's deuce put him at 2-under for the tournament and when Ewart subsequently carded a bogey 5 from the greenside bunker on that same 11th hole, suddenly it was just a one shot cushion for the 2015 BC Juvenile champ and the momentum appeared to be shifting.

Alas, that would not prove to be the case...for anyone. Following his moment of magic on the 11th hole Bourque managed pars on 12 and 13 but then finished 5-over for final five holes including an unfortunate double-bogey on 18 which featured a very tough pin position that got the best of many in the field this day.

"Back nine, I was just hitting it in the rough. Not by much...and, it's not generous if you're in the rough here. It seemed like every time I hit it in the rough I was making bogey or worse. I've got to try and not do that tomorrow." said Bourque. 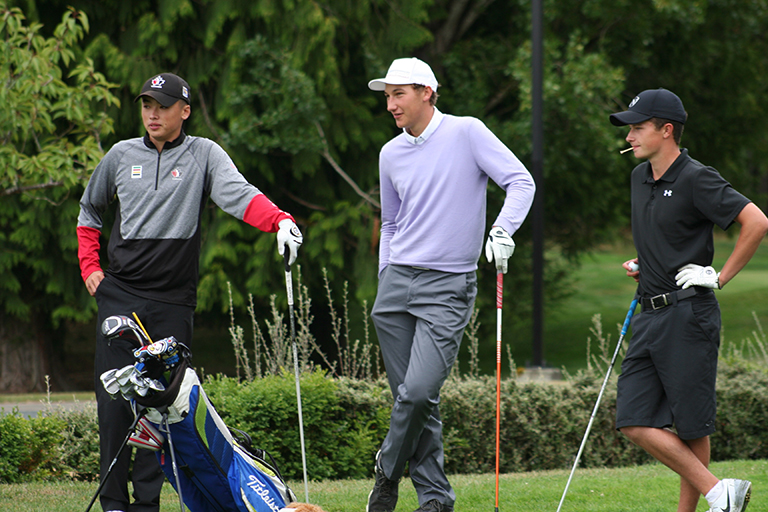 (L-R) A.J. Ewart, Keenan Flemming And Adam Veenstra Wait To Tee Off On The 10th Hole At Arbutus Ridge GC

Sechelt's Flemming looked like he might take the lead into the final day on his own after stringing together 17 consecutive pars and heading to the last at 1-under par for the event...until the diabolical 18th offered up a double-bogey to finish his day at 2-over 72 and 1-over for the tournament. Flemming will be in the next-to-last group along with Bourque and Keaton Gudz who fashioned one of only two rounds under par on this unusually extremely cool, damp July day.

Gudz' 1-under 69 leaves him three shots back of co-leaders Ewart and Lee along with Bourque and Smithers' Adam Veenstra. After a solid 67 Thursday Veenstra slipped back to a 3-over 74 in round 3 but is still within striking distance. "I think with the rain the rough got so thick and I wasn't hitting it well at all at the start. Trying to get up and down with the rough thick and the greens firm, it was impossible," said Veenstra, "I got it back to 1-over, which I thought was a good score. But unfortunately I doubled 18, which hurts."

Lee will be looking to keep his steady game going in the final round, perhaps buoyed by a nice 20-foot birdie on the difficult island green 17th, one of four birdies he made on the day to go along with four bogies. "I was pretty solid. My putting was the stongest part of my game, even though on ten I missed a 1-footer for par," he said laughing. "I'll try to do the same thing tomorrow as the 1st round and the 2nd and today...try to be consistent," said Lee.

Following his round a slightly disheartened Ewart headed straight to the practice putting green to work on the part of his game that seems to giving him the most concern going into round four. "I was playing fine, the putts just weren't dropping...through 15...and...I finished bogey, bogey, bogey, which is just due to mental errors."

One of those bogies was a very good one actually, as he made a terrific up and down following a drop from a water hazard on the uphill 387-yard par 4 16th. "That saved my round basically," said Ewart. Subsequent bogies on 17 and 18 saw him finish at 3-over 73 for the day to sit at even par after three rounds.

After burning the edge of the cup on 18 for birdie...yet again, he thought he'd have a short come-backer for par but the devilish pin placement saw the ball roll some 8-9 feet past and he wasn't able to convert the par putt. Still, he's in the final group on Friday and says, "I have to play my game, make sure I stay focussed and patient. That's just the way I've got to play."

And hopefully for him, see a few more putts fall.

The final round tees off 7:30am Friday with the trophy presentation taking place for the 2016 BC Junior Boys Championship immediately after.

Best-Ball Competition: In the Best-Ball competition being held concurrently through the four rounds of the event, Keaton Gudz and A.J. Ewart sit at 16-under and hold a 1-shot lead over two teams, Tristan Mandur and Adam Veenstra as well as Andrew Spalti and Thomas Verigin.