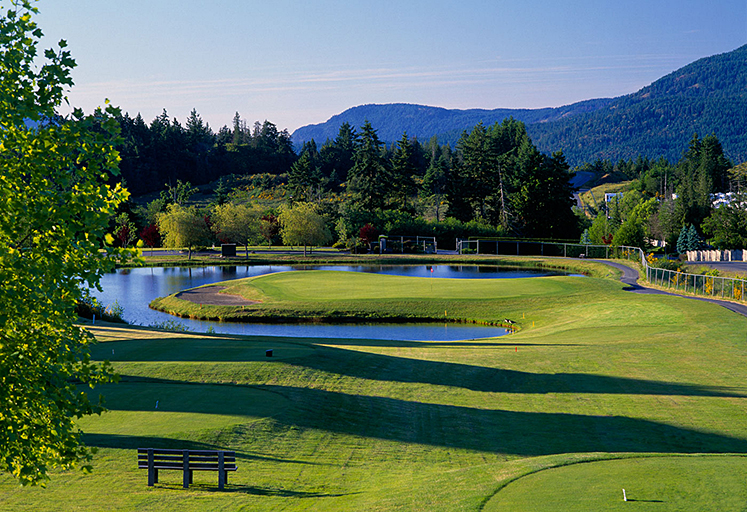 The 'Thoughtful, Scenic' Arbutus Ridge Golf Course In Cobble Hill On Vancouver Island Will Host The Best Junior Boys In The Province For This Year's BC Junior Boys Championship - Image Courtesy Arbutus Ridge

The 2016 BC Junior Boys Championship is set to tee off on Tuesday, July 5th at Arbutus Ridge Golf Club. Arbutus Ridge, owned and operated by the GolfBC Group, is located in the seaside community of Cobble Hill within the Cowichan Valley amongst nine of Vancouver Island’s finest wineries and 10 minutes from the cultural city of Duncan and just a scenic 40 minute drive from Victoria or Nanaimo.

A Bill Robinson design built in 1987, Arbutus Ridge was specifically routed to offer some of the most stunning views on Vancouver Island amongst the characteristic Arbutus trees. The front nine weaves alongside a seaside community while the back nine climbs a ridge overlooking the Satellite Channel.

The course will be playing to a par 70 and while the length, at just under 6,200 yards, doesn’t seem overly punishing this course has more than enough teeth to defend itself.

According to Head Golf Professional Richard Ingle, “The thing that good players struggle the most with at our golf course is short-siding themselves, or leaving themselves above the pin. We have sloping greens and if you miss the green in certain areas you can be 20 feet above the pin and you'll have an extremely tough two putt.

Also our greens can get quite firm so allowing yourself that bit of space between where the ball lands and where it releases to the pin, you have to be cognizant of that. Sometimes the ball bounces over the back of the green and there's not too many golf courses where over the green is good."

From it's opening hole, a straightaway par four where you're looking at out of bounds right and left facing you for your first shot of the round, to its final three holes, often referred to as three of the most demanding finishing golf holes on Vancouver Island and featuring an island green at the 214-yard par 3 17th, these young guns will be facing a solid test of both their golf game and their nerves.

But as Ingle stated, "It's going to be interestng because they're fearless. That 'risk/reward' that we talk about, they have no qualms about setting it up with driver, whereas my knees are knocking all over the place."

So what might it take to win this event? Ingle feels that an under par score possible. "I think that over four days, if you're 4 to 5-under par, you're going to be right up there," he said.

The University of Idaho incoming freshman (at that time) shot a final round 3-under par 69 to finish at (-13) 275 and beat Zaahidali (Ziggy) Nathu by two strokes.

Scarrow is not back to defend this year as he’s past the age limit but 2015 runner-up Nathu from the Richmond Country Club will attempt to finish what he started a year ago when he led after the 2nd and 3rd rounds.

Among some of the other names to watch are recent Zone 5 Junior Champion Tristan Mandur and runner-up Keaton Gudz who shot 69 and 67 respectively in the final round played at Arbutus Ridge.

And those are only a few of many strong candidates who could come out on top in this very deep field.

The BC Junior Boys' Championship is open to 156 amateur males aged 18 and under as of August 1st and who meet qualifying criteria. The top 70 and ties plus the top 5 best-ball teams will make the cut after 36 holes.

Click HERE for other information and the full leaderboard.