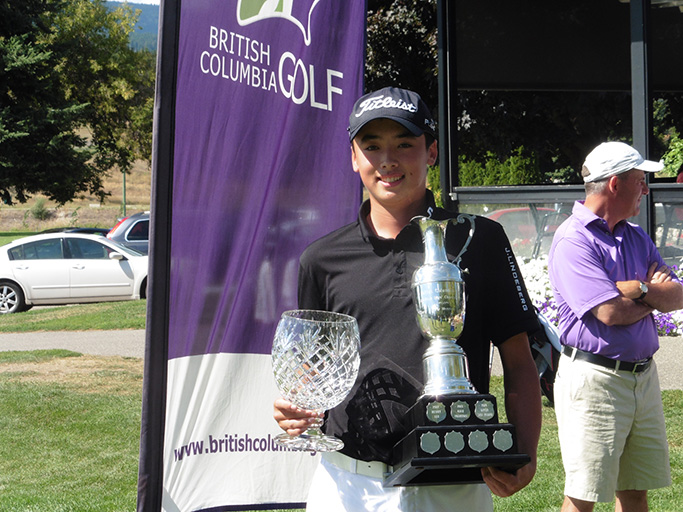 Less than a month after winning at Spallumcheen Golf & Country Club in Vernon, Ewart won the AJGA Sunriver Junior Open in Oregon and competed in the Duke of York Cup in Kent, England.

Ewart’s Oregon win saw him chase down first- and second-round leader Charlie Reiter of Palm Desert, CA with a final round (-4) 67 on the par-71 track to finish at (-7) 206, two strokes better than Reiter.

Ewart had entered the final round 5 strokes behind the Californian, but Ewart’s final day charge earned him his first AJGA title in the tournament which ended on Sept. 3.

Three days later, Ewart boarded a plane for England, where he, along with Ontario’s Grace St-Germain, represented Canada at the Duke of York Cup at the Prince’s Golf Club in Kent, England. C

Coach Robert Ratcliffe accompanied the duo to the United Kingdom for the event. The Duke of York Young Champions Trophy is an international 54-hole stroke play golf tournament for young men and women who are either the current holders of their Under 18 National Championship or have won some other major golfing event in the preceding year.

The inaugural tournament was played in 2001 with 12 players from six countries. Since then, The Duke of York Young Champions Trophy has expanded and now draws players from across the world.

It aims to promote the development of junior golf, encourage competitiveness and friendship between individual champions while also providing them with an opportunity to play on Open venue courses against their peers. The event counts towards the World Amateur Golf Rankings.

Prince Andrew, the Duke of York, hosted a dinner for the 56 players in the tournament before play began on Sept. 9. "It is through this sort of competition that future great golfers, both professional and amateur, will be identified and encouraged. There are so many talented young sports people and I am determined to assist with their endeavours," said the Duke of York in his address to the players.

The winner of the tournament was Finland’s Oliver Lindell, who shot rounds of 73, 68 and 66 to finish at (-9) 207, one stroke better than Felix Palson of Sweden and two strokes clear of Joaquin Neimann of Chile.

For more information on the Duke of York Cup, please go to http://doy-champions.com