Finding Some Green At The U.S. Open – Salish Cliffs A Big Hit 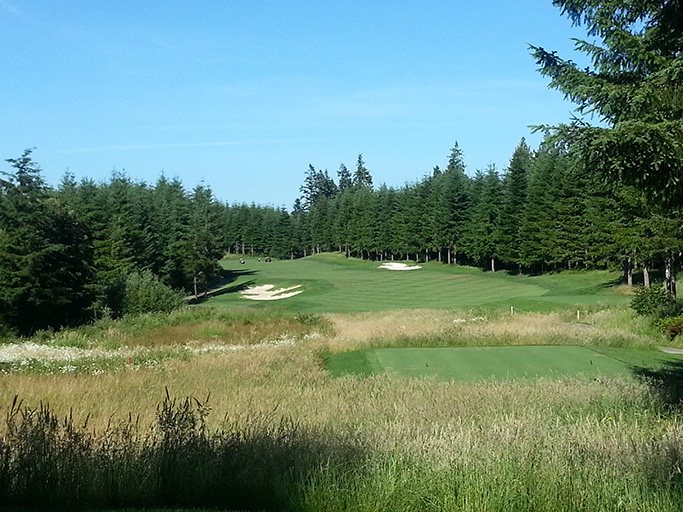 The opinions expressed in portions of this article do not necessarily reflect those of the editor. Those particular opinions should make themselves painfully obvious - ed

With the U.S. Open making its first foray into the Pacific Northwest, television viewers have been treated to visuals of a browned out and yellow Chambers Bay that is playing fiery fast and much like a British Open venue.

But after two days of seeing little green, we decided to head south and find a green golf course. Just 45 minutes away, in Shelton, is the Salish Cliffs Golf Club.
The course, which is owned by the Squaxin Island Tribe, is next door to the Little Creek Casino Resort, and plays to a bearish 7,269 yards from the Championship tees.
Wednesday afternoons at a Major are often eerily quiet, as the best players have already done most of their preparation and want some quality down time before the pressure of opening round Thursday hits them.
For example, Jordan Spieth had signed up to play 9 holes at 3:12 p.m., but he moved that up, playing the back-9 three hours earlier, finishing just after 2 p.m.
For journalists covering the event, it’s the same story, as most of the heavy lifting should have been done and with few golfers on the course to follow, it’s time to relax and have fun. 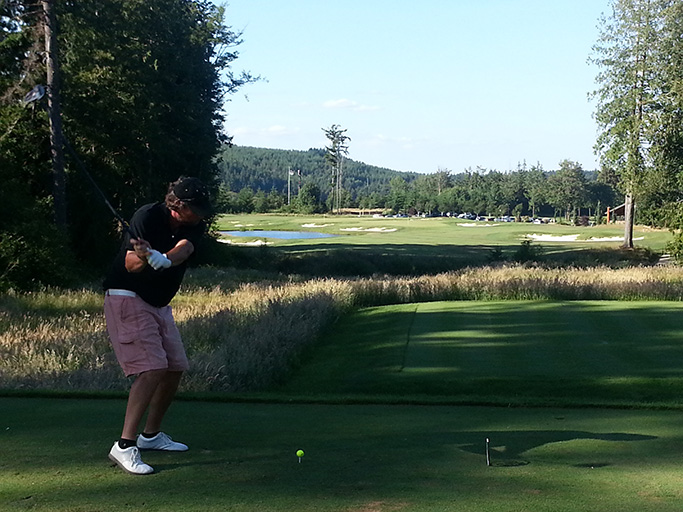 image credit bryan outram
Vancouver Golf Tour Sponsor Dave Patterson Tees Off On The Picturesque 9th Hole At Salish Cliffs
While many journalists ventured north to Safeco Field to see Felix Hernandez outpitch Madison Bumgarner in a 2-0 Seattle Mariners win over the San Francisco Giants, we decided to play golf at a course only Lau had played previously.
Our foursome, featuring myself, editor Bryan Outram, Vancouver Golf Tour Commissioner Fraser Mulholland and lawyer David Patterson, decided to play the Players tees, which looked manageable at 6,312 yards.
With Mulholland a PGA of Canada Class A Professional playing as a scratch, the rest of us played as 14s, even though Outram and Patterson are closer to 11 than they are to 14.
Outram started the day with a bang, birdieing the 490-yard par-5 first after making the green in two. His 240-yard second nestled to within 20 feet of the hole, where he calmly two-putted for birdie, a rarely seen occurrence with true 14-handicappers.
Mulholland and Patterson had never played Salish Cliffs before and were wowed by the pristine greens and challenging tee shots. Patterson had a rough start, but he got his game going on the 550-yard 8th hole, where he canned a 20-foot birdie putt and accentuated it with a fist pump.
Mulholland, better known as “Commish,” didn’t get much going until the end, where he bombed a 290-yard drive on the dogleg right 16th and then made a victory-clinching 15-foot birdie putt on the 140-yard par-3 17th.
Commish, playing as a scratch, finished with a (+3) round of 75, just three strokes better than his playing partner, the “14-handicap” (ahem, sandbagging) editor.

no credit for this image
From L-R Dave Patterson, Bryan Outram, Fraser Mulholland And Alfie Lau
Patterson came in at 83, while yours truly was a tad north of that (as true 14 handicappers traditionally are). Commish was very impressed with how Salish Cliffs could be set up as a tournament track.
Likening it to the Salmon Arm Golf Club, Mulholland was taken aback when we stepped up to the 18th teebox and found another teebox facing 45 degrees away.
It took us all a while to realize that was the championship teebox for the 7th hole, which we played at 351 yards (with three pars and a bogey), but now stretched out to 448 yards.
The Tournament Tees were only 371 yards, meaning the 7th hole could provide interesting challenges each day depending on how organizers wanted to set the course up.
Salish Cliffs Head Golf Professional David Kass, who greeted us warmly on the opening tee, also enjoys the back-to-back challenges offered by the par-4 2nd and the par-3 third holes.
Number 2, which can play to 305 yards from the Championship tees or 250 yards from the Players tees, is an uphill, driveable hole with lots of trouble left and right.
Number 3 is a downhill par-3 that can play to a Herculean 291 yards from the tips and 211 yards from our teebox. “We can set it up so that the par-3 plays to a longer yardage than the par-4,” said Kass.
It was no surprise that only the Commish could make pars on both holes. The Commish was also the only player who could make par on the tough 383-yard 14th, which features an environmental area fronting the green.
With the wind blowing directly in our face, our second shots were predictably hit to the left, leaving us chips onto the green for our thirds and our inevitable bogeys.
Salish Cliffs has been particularly busy during U.S. Open week, as its Stay-and-Play packages have been very well received and golfers wanting a break from backbreaking hikes up and down Chambers Bay have enjoyed the gentle walks from the cart to their balls on the lush green fairways at Salish Cliffs.
For more information, go to www.salish-cliffs.com.
www.twitter.com/AlfieLau