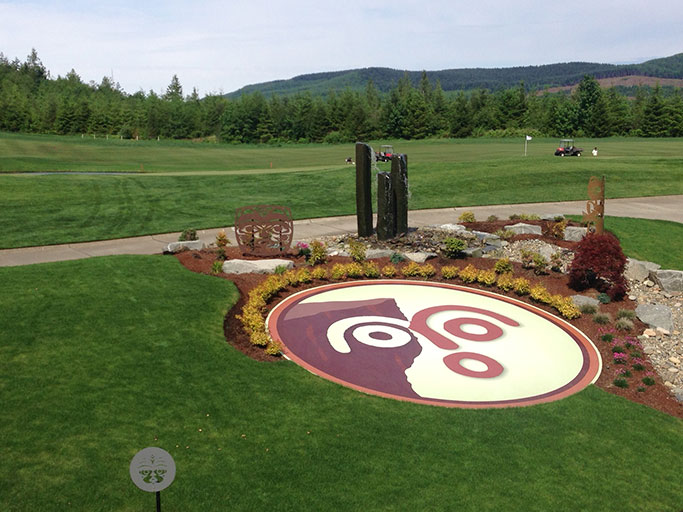 So you don’t have hundreds of dollars – or the golf game – to play Chambers Bay, host of the 2015 U.S. Open, but still want to golf championship golf courses in the Seattle area?

Well, your best alternative may be heading south and west to the Olympic Peninsula, where Salish Cliffs has partnered with The Cedars at Dungeness and White Horse Golf Club to offer an unbelievable golfing deal.

For just $149, you get one round at each of these courses on the Olympic Peninsula Casino Golf Trail Card, which went on sale earlier this year and if you hurry, you can get one of the few remaining cards still on offer.

And since you’ll be down to golf, where better to stay than the Little Creek Casino Resort, which is situated in Shelton, WA, just a drive and wedge away from the first tee at Salish Cliffs?

Designed by Gene Bates, Salish Cliffs is an undulating course which plays through a lush forest, verdant wetlands and spectacular mountainside views of the Kamilche Valley.

While the course tips out at a challenging 7,269 yards, its tournament tees, at 6,766 yards are challenging to all single handicappers while the 6,312 yard Players’ tees were beastly hard for middle handicappers.

The course opens with a couple of gentle holes, a downhill par-5 with a tree guarding the right side of the fairway on your drive, followed by a reachable par-4 which plays 305 yards from the tips and only 250 yards from the Players’ tees. 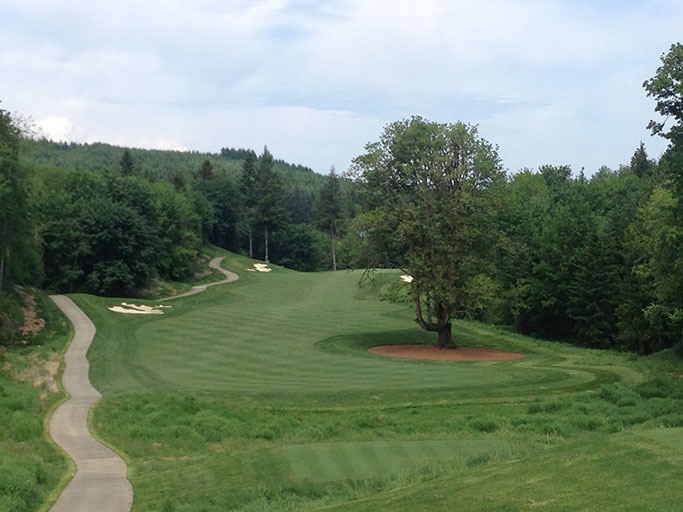 The course gets much tougher starting with the third hole, a downhill par-3 to a large green. But did we mention that the back tees are located 291 yards away, with the Players’ tees at 211 yards?

Salish Cliffs Head Golf Professional David Kass jokes that they can set up the back-to-back second and third holes so that the par-3 plays longer than the par-4, but the truly challenging holes start coming in droves later on.

All of the remaining par-4s tip out at over 400 yards each, while the 601-yard 8th still plays 550 from the Players’ tees. There’s 600 feet of elevation changes during your 18 holes of play, but rarely will you get anything but a flat lie – if you stay on the fairways, of course.

According to Kass, when Bates came out to scout possible holes and routings for the course, he had a choice of three different options. The local Squaxin Island Tribe, which owns the course and the casino, liked one of the options better and Bates went to work on what he would describe as the most challenging of the three original sites.

People playing the course for the first time will find three holes the most challenging or memorable. The 9th and 18th holes play alongside the only water hazard on the course, the lake which fronts both greens and is visible from the clubhouse.

As for the most challenging hole, it’s only rated the 10th most difficult, but the 455-yard 16th (409 yards from the Players’ tees), features an all-or-nothing second shot, over an environmental area, to a tucked and undulating green.

The cart-mandatory course features T1 Bentgrass greens, tees and fairways, with Rye rough and Native fescue borders. The course, which features many environmental areas, uses only rainwater and reclaimed water to keep its lush green appearance and is the world’s first Salmon Safe Certified golf course.

Since its opening in 2011, the course has added more than 2.5 miles of French drains to make the course one of the most playable courses all year long, winter included. This year’s mild winter meant Salish Cliffs has seen better numbers through the first half of 2015, with an even brighter future as U.S. Open tourists discover it for the first time.

After your round is complete, the complimentary shuttle service can whisk you back to the resort, where if you’re a gambler, there’s more than 1,000 slot machines, along with all the table games you’d expect at a world-class casino.

With the U.S. Open bringing so many visitors to the Seattle-Tacoma region, Kass is hoping that people with an itch to play a round, while the professionals tee it up at Chambers Bay, will give Salish Cliffs a try.

“We are offering a challenging golf course less than an hour from Chambers Bay, in one of the most picturesque settings you could ask for,” said Kass.
For more information, go to www.little-creek.com or www.salish-cliffs.com.