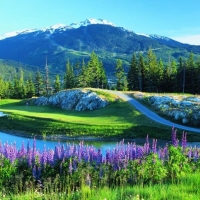 The esteemed publication, Australia's premier travel and lifestyle magazine devoted exclusively to luxury travel, with a readership of more than 100,000, released its 2013 Gold List Award winners April 8 via Twitter and Facebook.

It marks the first time the magazine has run an exclusively social media event for the awards, with the hashtag #LuxTravGoldList used to reveal the winners.

The Luxury Travel magazine award follows a string of recent accolades for the resort and various local businesses, including:

Reader's Digest - 10 Most Romantic Places in Canada
Whistler No. 1

Tourism Whistler congratulates the businesses honoured with these recent accolades.

"We are excited to share this news on behalf of our Members and to congratulate them and thank them for their ongoing focus on product development, quality assurance and service excellence. We are very fortunate to have so many ambassadors who work diligently to provide an exceptional guest experience."

Whistler is Canada's premier year-round leisure and meeting destination located in the Coast Mountains 120 kilometres (75 miles) north of Vancouver, British Columbia, Canada. Consistently rated the top ski resort in North America, Whistler was the Host Mountain Resort of the 2010 Olympic and Paralympic Winter Games. The resort offers an extensive range of accommodations totaling 10,000 bedrooms among 24 hotels as well as townhomes, condos, B&Bs and chalets. Whistler also boasts more than 100 restaurants and bars, 200 retail shops, 25 spas and countless activity options from world-renowned skiing and snowboarding, mountain biking and golf, to hiking, rock climbing, and watersports. The Resort Municipality of Whistler is home to a diverse community of more than 10,000 permanent residents.

Tourism Whistler is the member-based marketing and sales organization representing Whistler, operating the Whistler Conference Centre, Whistler Golf Club, Whistler Visitor Centre, as well as 1.800.WHISTLER and whistler.com - Whistler's official source for visitor bookings and information. As the convention and visitors bureau for the Resort Municipality of Whistler, Tourism Whistler represents more than 7,000 members who own, manage and operate properties or businesses on resort lands including hotels, restaurants, activity operators and retail shops.