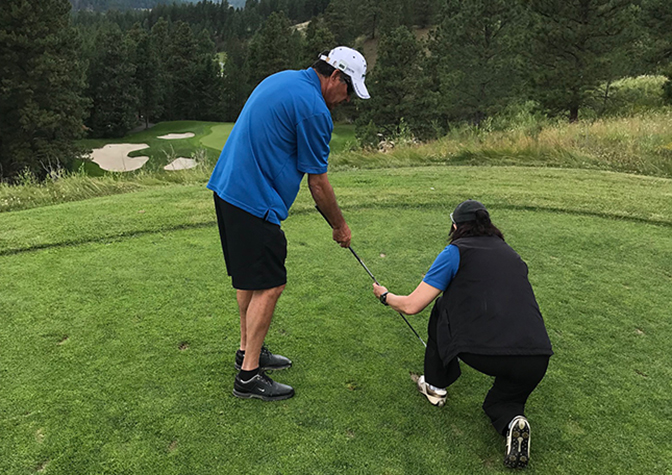 An inaugural 'Cloud' Blind Golf Championship took place at various golf courses across the country last week and proved to be well received.

With the hard work of Creston, BC's Darren Douma, who is the President of the Western Canadian Blind Golf Assoc. and the Vice President of Blind Golf Canada, along with Doug Hastie from British Columbia Golf, sight-impaired golfers from BC to Ontario were able to play rounds at a home course or one near to their residence and submit scores to be compared on the basis of the course rating.

Using this method players were able to play at a time that worked for them and also not have to be concerned with travel which was a big benefit both for health & saftey reasons, as well as without incurring the added expense.

In Blind Golf, players are categorized by their level of sight impairment. B1 players are totally blind, up to B3, comprised of golfers who have vision from 20/200 to 20/600. All are classified as legally blind.

Blind golfers have handicaps just like sighted players and compete against one another in both gross (total strokes, not using handicaps) and net events (includes handicaps). There are some modifications to the Rules of Golf to accommodate blind golfers. e.g. clubs can be grounded in bunkers.

The role of the caddie/coach in blind golf is very important. Guides generally align players, often place club heads directly behind the golf ball and follow the flight of the ball. The guide also ensures the player’s safety when moving about the golf course.

Due to the success of this event, talk had begun with the hope of arranging a North American Blind Golf 'Cloud' Championship for next season.

B1 (No Vision) Low Gross Category