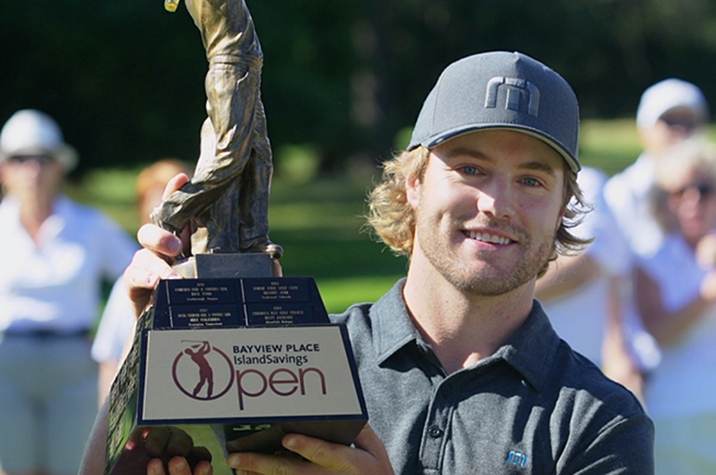 In his new life, Langley’s Adam Cornelson often finds himself in operating rooms observing intricate orthopedic surgeries. In some ways it reminds Cornelson of his former life as a touring golf professional. “I find it very similar to what golf used to give me,” says Cornelson, who sells medical equipment for Conmed, a large U.S. based company.

“When I know I have to go into the operating room the next morning I am kind of studying and preparing and I am nervous. There’s two or three hours of intensity and then you kind of relax. I find it very similar to a golf tournament.”

Cornelson, a past winner on the Mackenzie Tour who walked away from tournament golf four years ago, is coming out of retirement to play in the first event of the Mackenzie Tour’s Canada Life Series at Bear Mountain near Victoria. The 32-year-old doesn’t quite know what to expect from his game.

“I don’t know, we’ll see,” he says. “I have been shooting some good scores lately. But who knows. That is why I am playing. When I get into a real tournament I’ll see how it goes. I don’t really have any expectations.” 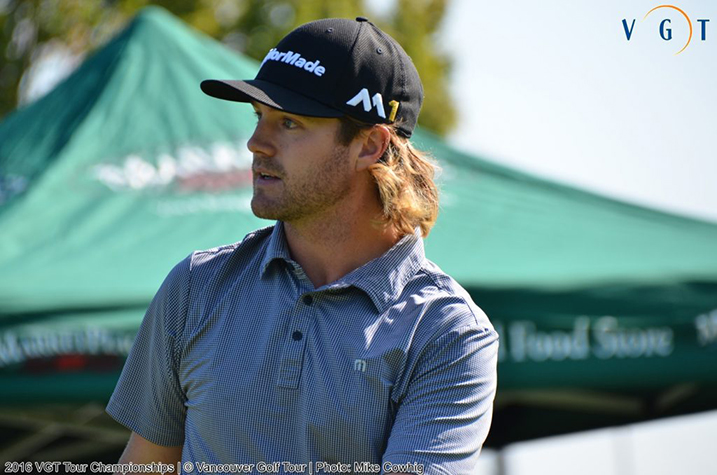 Cornelson has no illusions about resuming his old life as a full-time touring pro, but says he always planned to keep playing occasional events. “I always had plans to continue to play professional golf again,” says Cornelson, who earned a business marketing degree while playing collegiate golf at the University of New Orleans.

“Once I stopped touring I had to get a job and get my affairs in order to live. I don’t know if I was going to chase the tour again, but I was always going to play the Vancouver Open or U.S. Open qualifiers and maybe Victoria or Vancouver (on the Mackenzie Tour) once in a while.”

Cornelson, now 32 and married less than a year to his wife Jessica, has continued to play at Vancouver Golf Club, where he has been a member since he was a junior. “I have been playing a lot at Vancouver Golf Club -- men’s night and Saturdays -- but not really practising at all,” he says. “All of a sudden I am starting to practice. I haven’t practised in years.”

Cornelson credits his longtime friend and fellow pro, Nick Taylor, with convincing him to dip his toes back into the competitive waters. Back in early June, when the PGA TOUR was on hiatus, Taylor convinced Cornelson to play with him at the Vancouver Golf Tour’s one-day Cultus Lake Open. “It was fun to play with those guys again and it got my juices flowing again,” says Cornelson, who tied for eighth at two-under par with Taylor that day.

“I was pretty surprised at Cultus Lake, it’s an executive (par 63) course, but I hadn’t played in a couple of years and I get out there and Nick is being followed by TV cameras and I am like, ‘What did I get myself into?’ But my game held up pretty good, so we’ll see.”

Cornelson won the Mackenzie Tour’s Victoria stop in 2016 at Uplands Golf Club. He finished fifth on the money list that year to earn conditional status on the Korn Ferry Tour (then the Web.com Tour).
His 2017 season got off to a miserable start with a string of missed cuts and Cornelson returned home to play the start of the 2017 Mackenzie Tour season. 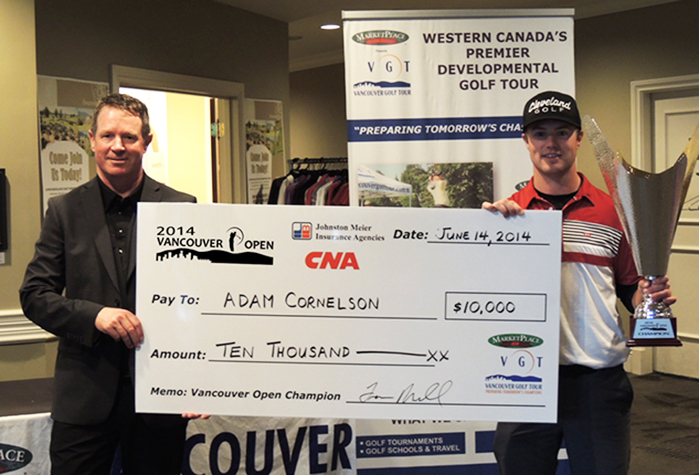 Cornelson Accepted The $10,000 Winner's Cheque From Commissioner Fraser Mulholland Following His Win In 2014 In The Vancouver Open - Photo Courtesy VGT

“I just got in a bit of a rut and didn’t play great,” Cornelson recalls. “I went back home and after being out there in Canada for six or seven years straight and finally getting off it and then having to go back my desire wasn’t where it needed to be for me.

“Competing with these young kids, I had to play at 120 per cent and grind and focus. I wasn’t Adam Hadwin, get out there and shoot 64 every day. I didn’t initially plan to stop, I played Vancouver and Victoria and decided to take a breather for Kelowna. The biggest thing was my desire. I loved travelling, I loved playing and when I didn’t want to go to Kelowna I knew that wasn’t good. I just kind of hit a wall and needed a break.”

The Canada Life Series is comprised of four 54-hole events for Canadian players or residents of Canada. Each offers a purse of $50,000. The first two events go at Bear Mountain, with the final two being played at TPC Toronto.

Cornelson is only planning to play in the first Bear Mountain event, which goes Aug. 10-12. “It will be interesting to see how the game holds up,” Cornelson says. “This is more about just getting back on the horse more than anything. I am definitely not as prepared as I would like to be for this. I think just hearing my name announced on the tee and getting back into the saddle will be the biggest thing.

“My wife and I are going to go over, stay at Bear Mountain and play and we have some friends in Nanaimo so we are going to make a little vacation out of it and hope I don’t embarrass myself.”