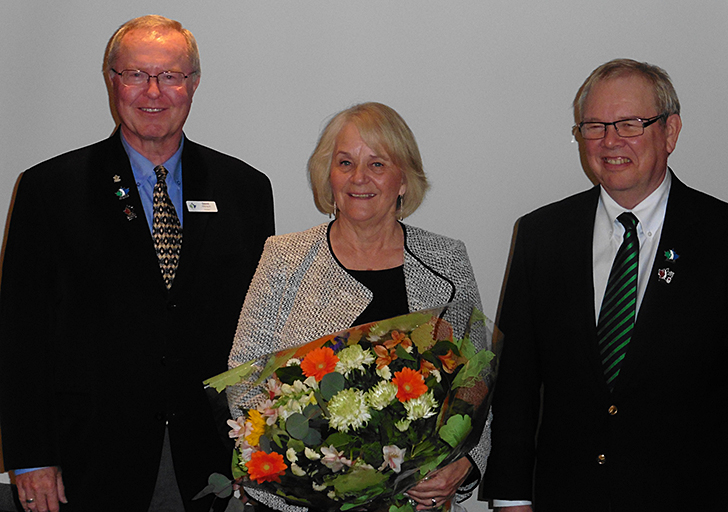 Volunteers who’ve given countless hours to amateur golf were amongst the attendees at the 12th Annual General Meeting for the British Columbia Golf Association on March 28th at the Executive Airport Plaza in Richmond.

They were there to hear an informative presentation from Executive Director Kris Jonasson on the USGA’s Pace of Play Research Findings, hear about the Association’s financials, and give thanks to Karen Vanzella, this year’s Distinguished Service Award winner.

Jonasson’s presentation was based on one given at a Golf Canada meeting in February and highlighted some of the USGA’s extensive findings.

In particular, the USGA discovered that while slow play is often referred to in media reports as a reason for declining golf participation, it actually rates lower when the data is analyzed.

For example, when golfers were asked the main things that optimize their golf experience, 82 per cent cited course conditioning, 76 per cent cited the people they play with and the enjoyment they derive from playing golf with their friends, 75 per cent cited accessibility to tee time availability and 74 per cent cited pace of play.

In particular, pace of play is often the difference between playing slow or playing with flow. A group that plays in 4:39 but doesn’t have to wait to hit their shots feels like they’ve had an enjoyable time on the golf course, but a group that waits on most shots, yet plays in 4:32, seven minutes quicker than the other group, feels like they don’t want to come back to that course again.

“More people are looking for flow,” said Jonasson. “Golfers are not looking for slow. The amount of time is not as important as the flow of golfers on a course.” 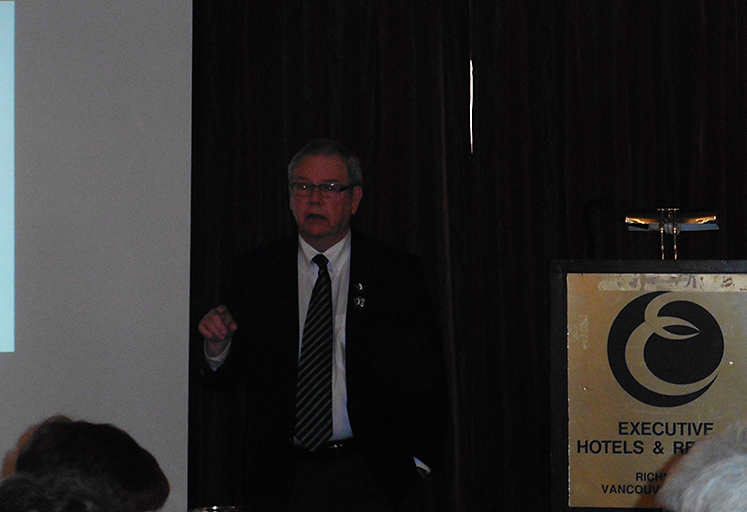 As for the causes of slow play, they range from player behaviour to course design to course setup to green speeds.

One of the ways the USGA is trying to collect more data is the use of a new monitoring tool which attaches to the flagstick. The tool is activated when the stick is laid horizontally on the ground – when golfers reach the green and take the vertical stick out of the hole to putt – and British Columbia Golf is trying to become a test site for these flagstick monitors.

After Jonasson’s informative presentation, British Columbia Golf President David Atkinson convened the AGM, where the highlights were Michelle Collens  and Ed Helgason being acclaimed to three-year terms on the Board of Directors, Helgason providing an analysis of the financials and Karen Vanzella of Squamish being honoured for her many years of volunteerism.

Vanzella, who had an entire table of family – including her husband, three sons and grandchildren – cheering her on, has more than three decades of service in the golf industry, including time organizing events, working on committees and being a course rater.

Vanzella’s speech used the theme of the colours of a kaleidoscope as it related to her time in golf. From the colourful pastels of her first team uniforms to the green of the British Columbia Golf Association, Vanzella’s colourful presentation touched on her time on the executive of the British Columbia LGA, BC Women’s Golf Association and her longtime association with the Squamish Valley Golf Club.

“This honour means a lot to me because we are all volunteers here and to be recognized by your peers is humbling,” said Vanzella. “There are so many good people I’ve met in golf.”

Vanzella joked that her first foray into volunteerism came about because after a round of golf, she wanted to have a drink at the club bar, only to find out it was a men’s only bar. That led her into getting involved in her local women’s club and getting them access to the bar after golf.

The highlight for Vanzella was working with and travelling with a great team of young female golfers in 2007 and 2008.

“That was a team that had A Ram Choi and SooBin Kim on it and what I remember most was SooBin was 15 and it was her first big event. We flew to Winnipeg and when we got there, we found out the airline had lost her clubs.

We scrambled to put together a set of clubs for her, but I spent most of my day going to the airport to receive every flight coming in to see if her clubs had arrived. We got her clubs at 8 p.m. the night before (the first round) and she went on to win that tournament. It was such an honour to be involved with that team and be trusted to lead this team.”

Atkinson closed the meeting by saying that while the data showing him membership numbers are declining, he’s excited about the upcoming year.
“A lot is happening, change is in the air,” said Atkinson. “We are working on several pilot projects and interesting changes that are expected to deal with this and there will be more detailed info coming up. It’s not going to happen overnight. It’s both a scary and exciting time in the world of golf.”