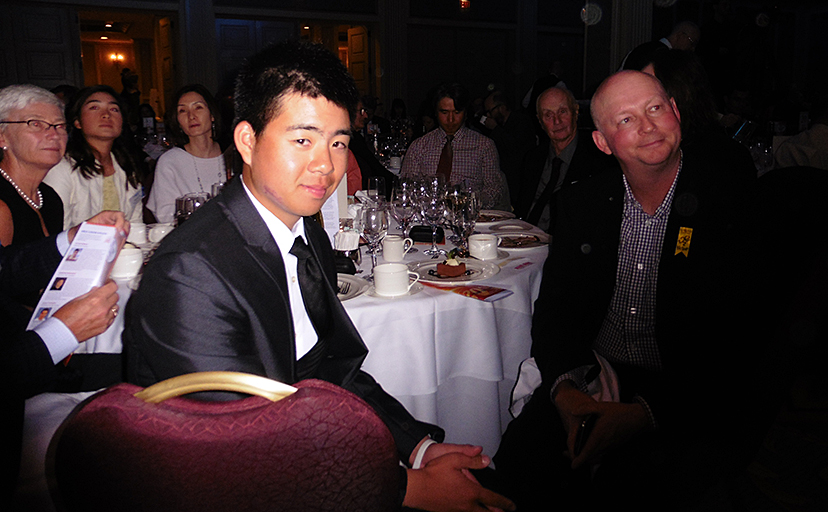 “This is a great honour and I’d like to thank Sport BC for this award,” said Lu. “I also have to thank my teammates at PW (Prince of Wales Secondary) and my coach Todd Kuspira, who has been so supportive. I would not have been able to do this without him.”

Lu made a supreme effort to attend the 49th Athlete of the Year Awards, as he spent Monday and Tuesday in San Diego, where his Washington Huskies won the team title at the Lamkin San Diego Classic and Lu finished T33 as an individual, behind individual co-winners and Husky teammates Cheng-Tsung Pan and Corey Pereira.

Lu flew back to Seattle, dropped off some luggage, and drove up to Vancouver in time for the formal dinner. Lu’s big high school win came in Squamish, where his flawless rounds of 63 and 67 helped his Prince of Wales squad win the team championship by 20 strokes.

His individual title meant he was the first high schooler since Brent Franklin in 1983-84 to repeat as AAA champion. “I had played Squamish before and I just really liked the way it set up for my game,” said Lu. “I think I was most happy with how our team did because the year before, we didn’t do so well as a team and it was a goal of ours to win the team title.”

Lu would take all that confidence into the 112th British Columbia Amateur at Seymour, where he bested Burnaby’s Michael Belle in a thrilling five-hole playoff after chasing the entire final round.

Lu, who started the day four strokes behind the SFU student, caught Belle with a birdie on the final hole and then the two engaged in an epic seesaw playoff that could have gone either way. “[Winning] makes me feel that my game has gotten a lot better,” said Lu after receiving his trophy.

“At the start of the day I thought, 'I’m four strokes back, I’m just going to focus on what I can do and just hit fairways and greens and hopefully make birdie.' I made some birdies, he made some mistakes and then we were in a playoff and it was just focus on the next shot.”

Lu has made a nice adjustment to collegiate golf and collegiate academics in Seattle. He's played six tournaments already and was looking forward to his next start, at the University of Oregon’s tournament, which starts March 23. “I know I need to play well at Oregon because I want to show my coach that I should be a part of the team for all of our tournaments,” said Lu.

In particular, Lu would love to represent Washington at the Pac-12 Championships in Pullman, Washington from April 27-29 and the NCAA Regionals in May.

On the academic side, Lu took three courses in his first term and has earned a respectable 3.2 GPA. This term, he has taken a psychology course and an environmental course, which has allowed him to expand his horizons.

When’s he not studying and competing, Lu is spending time in Auburn, Washington at the Huskies home course, Washington National. “They have The Playground there where you can work on your short game,” said Lu. “It has really helped my game.”

“The thing I noticed about college golf is that the courses play a lot harder than in junior golf,” said Lu. “The holes are much longer, the pin locations are a lot tougher. You don’t reach many par-5s in two. You have to make good shots all the time. I’m also trying to get used to a new environment, new people and new courses.”

Lu wasn’t surprised to hear that course preparations for the Pac-12 Championships in Pullman include having 6-8 inch rough surrounding the greens because if the wind doesn’t blow, the course is defenceless if not for almost-knee-high rough.

Lu credited Huskie’s head coach Matt Thurmond with working on his mental game. “He wants us to think about our games and he has us doing a lot of different things on the course that I hadn’t done before,” said Lu.

When Lu returns to Marine Drive, he works on technique with Kuspira, his longtime teacher, who also couldn’t have beeen happier to attend the Sport BC Dinner to cheer on his charge.

As for what’s on the horizon after his college season ends, Lu is looking forward to defending the Bostock Trophy he won last year. “Yeah, defending the Amateur is a big one for me. I think I’m also eligible for the British Columbia Junior and I want to play the Canadian Amateur and the U.S. Amateur as well,” said Lu.

And there’s an even bigger tournament Lu hopes to qualify for. “The U.S. Open being at Chambers Bay, so close to here and to where I’m going to school, I will be trying to qualify for that,” said Lu. “That would be so big and I’ll give it a try.”

Only a fool would bet against the Vancouver teenager who spent most of 2014 winning titles and honours for his golf game.