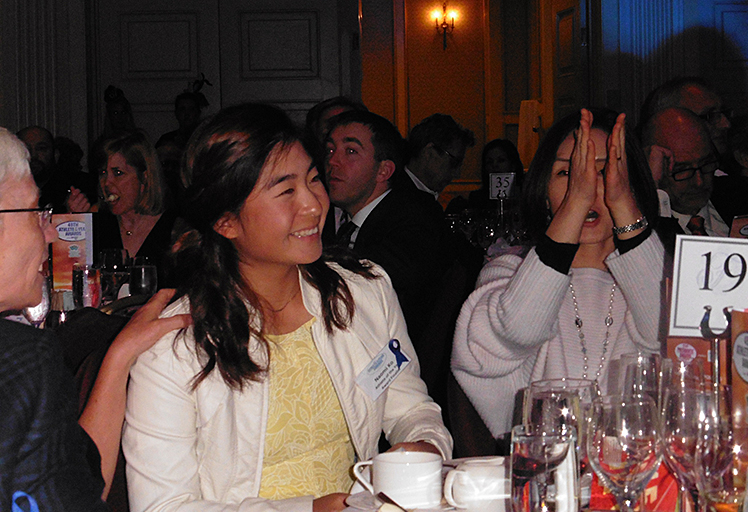 Naomi Ko of Victoria was a big winner at the Sport BC Dinner on March 12.

Ko beat out cyclist Maggie Coles-Lyster and swimmer Emily Overholt to win the Junior Female Athlete of the Year Award.

“I want to thank my family for always supporting me and giving me unconditional love,” Ko told the 500 assembled guests at the Fairmont Hotel Vancouver as she accepted her award. “I’m really honoured to win this great award.”

Ko’s family of mother Adriana, father Tony and younger brother Ethan enthusiastically cheered on the 17-year-old Claremont Secondary student who will be finishing high school in June and then flying east to Raleigh, North Carolina, where she has earned a golf scholarship to play for the North Carolina State Wolfpack.

“When I made my visit, it just seemed to suit me athletically,” said Ko. “I got to know coach Page Marsh and it felt like it was the right choice for me.”

Ko, part of a three-player international incoming class at NC State, said she was also influenced by NC State’s solid record of nurturing Canadian talent. “I know this year’s team has Augusta James and Vivian Tsui on it and I know that Brittany Marchand and Amanda Baker also did well there,” said Ko.

It’s been a dream year for the Team Canada Development Team member who is also a member at Royal Colwood Golf Club in Victoria. “I have been working with (national coach) Ann Carroll and I am very proud to be a Team Canada member,” said Ko. “I’ve had some good results and I think it all started when I made Team Canada.”

Internationally, Ko finished T12 in the South American Amateur, T33 in the World Junior Girls, T16 in the Porter Cup and reached the round-of-16 in the Western Amateur.

“My goals for this year are to compete in more women’s amateur events, both provincially and nationally,” said Ko, who has to be considered a player to watch at the British Columbia Women’s Amateur to be contested at Duncan Meadows June 29 to July 3.