Some Parental Advice From Jack Nicklaus 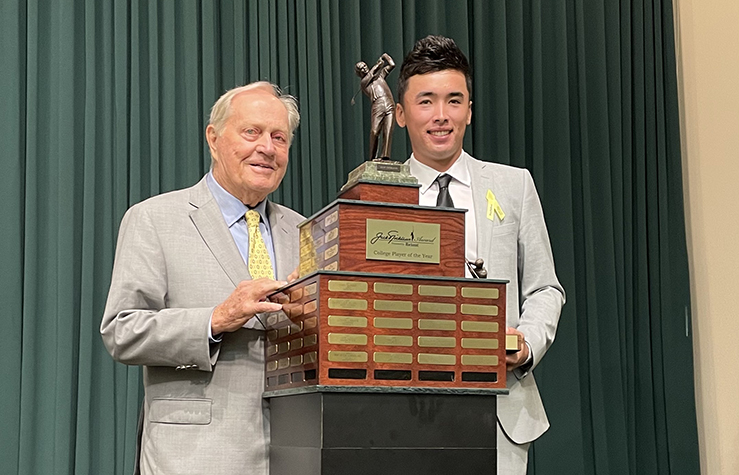 It’s not easy being a golf parent.

But, there are times when advice from another source can be very helpful. Especially when that source is Jack Nicklaus. In 2009 I was working on a golf construction project in Bangalore, India where Jack Nicklaus and his staff also happened to be in the early stages of designing a golf course.

Prior to arriving in India, the 12-man Nicklaus contingent made design stops in Japan and Korea and would be in India for only 24 hours. They toured the Nandi Hills site, Nicklaus made a number of design changes and then attended a dinner party with ten of the richest men in India.

The next morning, while the group was finishing breakfast and preparing to head off to the airport, I had the opportunity to ask Jack a few questions.

“Mr. Nicklaus," I said, "my son A.J. is developing into a pretty good golfer and is being considered for a spot on Team Canada’s Junior Development team,” I explained.

“Before I left for this trip, A.J. told me he wants to play on the high school basketball team. What should I do? I’m worried he could get hurt and it would hamper his chances of making the national team.”

“When I was that age, I wanted to play baseball. Golf wasn’t tops on my list. I played baseball and basketball. I would let him play,” advised Nicklaus.

Turns out, that was the best advice, as a coach and as a father, that I could have received. Instead of saying “no” as many concerned parents might, I said ‘yes, you can play.' A.J. was happy. He had a clear head to do what he really wanted to do and that was to play basketball with his friends.

All too often, parents do what they think is the right thing only to find that the cautious, 'parental' choice gets in the way of their child’s development.

A.J. played on his high school basketball team and went on to have his best year in junior golf. In the Fall he was selected to represent Canada on the Junior Development squad. That made me wonder how many people throughout his career have benefitted from the Golden Bear's sage advice.

I didn’t want to push my son into golf. I wanted golf to be A.J.’s self-chosen sport and waited until he was ready. He started walking at 12 months of age. I gave him a month to get his balance and A.J. started golfing at 13 months of age.

A.J. developed his passion for golf during his days in diapers swinging ‘Baby’s First Club.’ The little golfer used a real miniature seven-iron with a metal head, an iron shaft and a thin rubber grip. His first bucket of balls he hit would only dribble two meters off the driving range mat. In those days A.J. wouldn’t go to sleep at night unless we putted a few holes on the carpet and then he would sleep with his putter.

He played his first Junior Linkster tournament at the age of five. It’s hard to put a total on the number of golf tournaments he has played over the past 18 years.

The first time my son’s score bettered mine was the day before he returned to school to start grade 7. That summer he had won the B.C. Bantam championship with a pair of 68’s to finish four under par. On this day, A.J. birdied the last three holes to shoot 67 from the white tees at Westwood Plateau. I shot one-under 71 that day and lost by four strokes to a better golfer. He was 12-years old. 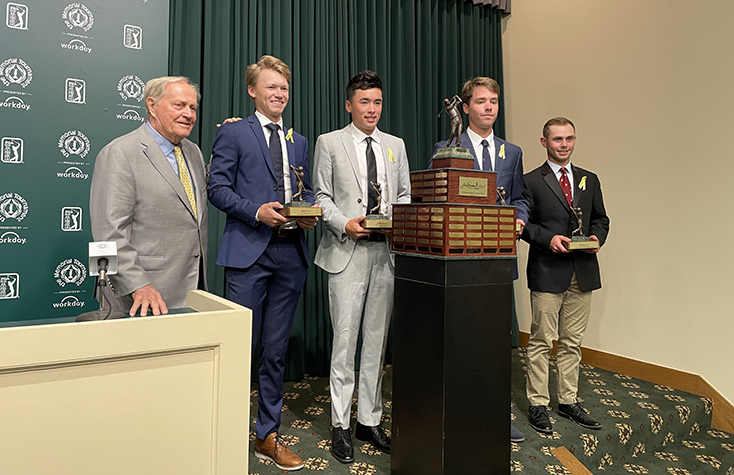 The Jack Nicklaus Award Is Presented To The National Player Of The Year In NCAA Divisions I, II, and III, As Well As NAIA and NJCAA

Five years ago A.J. agreed on a four-year scholarship arrangement at Arizona State with coach Tim Mickelson. Three months later Mickelson resigned from ASU and went on to caddy for his brother Phil. The new coach at ASU wouldn’t honour the commitment made to A.J. saying, ‘A.J. was good, but not that good’ and he would have to come back to ASU and renegotiate the scholarship.

After that disappointment with the new coach at ASU, A.J. was somewhat disillusioned with college golf and said he would turn professional when he finished high school. That year he finished #1 on Golf Canada’s Junior Order-of-Merit, won his first AJGA tournament and was ranked #42 on the World Junior Golf Rankings.

Then, after a year on the sidelines, A.J.’s attitude towards college changed. Team Canada Junior Development Coach, Robert Radcliffe, explained that Barry University had a good program with a good coach who was interested in A.J.

A phone call to Coach Jimmy Stobs at the #1 ranked Division II Barry University in Miami, Florida went as follows;

“Coach Stobs, this is Brad Ewart. Father of A.J. Ewart. How are you?”

“Mr. Ewart. I've been waiting for this phone call for a while. Nice to hear from you. Let’s find a way to get A.J. into Barry University.” 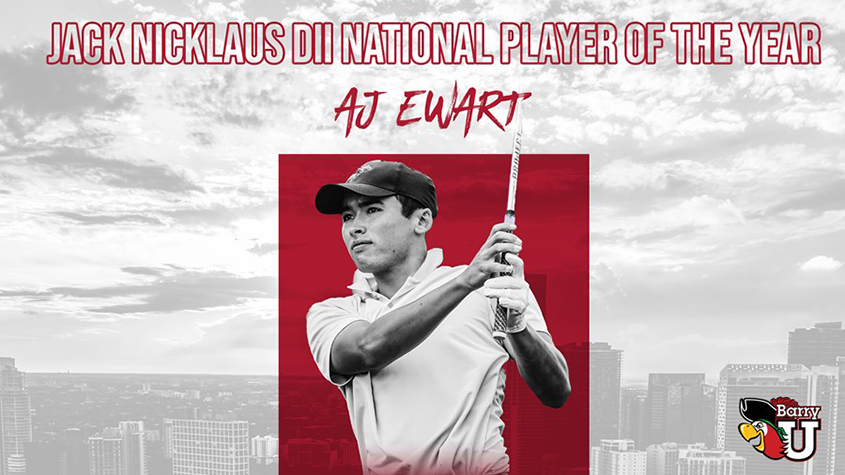 And that was how A.J. arrived at Barry University. A Division II school consistently ranked among the top golf teams in the nation with Coach Stobs as one of the best college coaches in the game. After three years A.J. has made All-American each season. During that time, he has won ten college tournaments and helped his team, Barry Buccaneers, retain their top-ranked status in the USA.

Today, A.J.’s travelled path brings him to Dublin Ohio and Jack Nicklaus’ Memorial tournament where he was presented The Jack Nicklaus Award as the NCAA Division II Player-of-the-Year. This past season, playing in his sophomore year at Barry University, A.J. finished first seven times and lost two playoffs in 10 college tournaments.

His season stroke-average was 69.40 and he finished the year on top of the NCAA Division II individual rankings. After finishing second in last year’s Canadian Amateur and with his stellar college season this year, he also earned a sponsor’s exemption into the RBC Canadian Open.

So, on this special day, I asked Jack Nicklaus for more advice.

“This week, A.J. will play in the RBC Canadian Open. It will be his first PGA tournament. Can you offer him some advice,” I asked.

“I didn’t win there. I finished second to Bob Charles. I didn’t win anything in Canada and had seven or eight seconds in the Canadian Open. It’s a pretty place. I enjoyed it. It’s one of those golf courses where you could shoot 68 and maybe lose ground,” he said.

“You’ve got to figure out how not to make a bunch of mistakes. Mistakes are not going to be good there. It looks like a golf course you can be extremely aggressive on, where you probably can be aggressive a lot of the time.

“Every golf course in every tournament there are four or five shots you need to avoid. If you play those shots conservatively you’ve got the rest of the course you can pretty well attack. As you get to St. George’s look and see where those dangerous places are. Make sure you just play away from those dangerous places. Get to understand those three or four shots where you don’t hurt yourself. Then you can go be aggressive on the rest of the golf course. That’s the way I would play.”

It gets a little easier being a golf parent when the greatest player in the history of the game offers his advice.