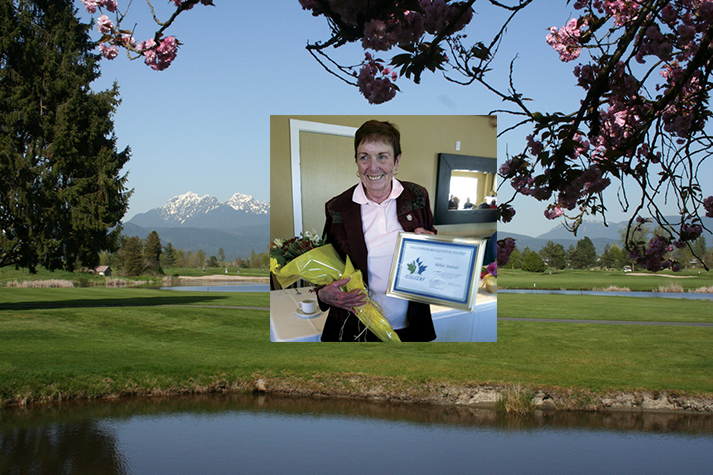 British Columbia Golf would like to join the entire golf community in expressing our sorrow with this loss and also extend our sincerest condolences to her many friends and to her family at this unfortunate time.

Just a few of Helen's contributions to the provincial golf association, the zone level and to her home club are outlined in this passage below as submitted by her friend and colleague, Susan Kennedy, a past ladies captain at Sunshine Coast Golf & Country Club, at the time of Helen's Volunteer Service Award in 2013.

"Since 1994, Helen Steeves was an active contributor to the Sunshine Coast Golf Club, holding every position on its Ladies Executive, including Captain in 2001. Her club contributions did not end after her lengthy service on the Ladies Executive. In conjunction with her Zone and Provincial roles since 2000, she provided extremely valuable consultation and support to every Ladies Club captain and executive committee since that time.

Helen has also been a valuable contributor to the Club overall. From 2000 to 2004, she sat on the Club Board of Directors, chaired the Greens Committee and worked tirelessly on the Constitution Committee. This was at a time when there were considerable changes at the Club and the continuity of Helen’s knowledge and contributions was invaluable.

Finally, not only was Helen an outstanding resource about Zone and Provincial activities, she was also an enthusiastic promoter for Zone 4 and British Columbia Golf. This was not a nominal or honorary position. Helen worked tirelessly the entire week of the tournament and contributed to its great success. From 2000 to 2005, she was first Vice-Chair then Chair of Zone 4 Women and was a continuing member of the Zone 4 executive since then, and was re-elected to serve through to 2014. She was responsible for completing the first revision of the Women’s Captains manual, the Interclub Team play manual, and co-designed and managed the Zone 4 Women’s website.

Helen was an active member of the BC Ladies Golf Association Board, and since 2004, was a Zone 4 representative to the BC Golf Board, a position from which her contributions were legion. From 2004-2012, she was Vice-President of Membership, of Finance, of Championships; and committee member on Discipline, Harassment, Constitution and By-Laws, and Governance. She was Chair of ad hoc committees on Zone funding, on Policies and Procedure, and was also Chair of the Governance and By-Laws committee. In this role she was instrumental in the creation of a BCGA Policy and Procedures Manual. Somewhere in there, she took a moment to design the new BCGA generic pins.

Oh yes, and by the way, she was also Chair of the Zone Council and a Director and Secretary of the Board of British Columbia Golf.

Finally, Helen contributed not only in ‘the office’ but out on the golf course as well. She was Tournament Chair for the BCLGA Senior Women (2004), BCGA Men’s Mid-Amateur (2008), and the BCGA Juvenile championship (2011), She was also a tournament official at many other BCGA Ladies, Men’s, and Junior tournaments and the 2008 RCGA Club Champions Championship.

Helen Steeves gave her ‘life’ to British Columbia Golf for some two decades (even taking a ferry back and forth from the Sunshine Coast to the Lower Mainland every time). I cannot think of a more deserving recipient of recognition in return."

In additon to the above recognition and acknowledgements, Helen received the British Columbia Golf Distinguished Service Award in 2019.

Fellow BC Golf contributor, Fyfe Brown, who worked very closely with Helen as the Zone 4 Chair for the Women's Executive had this to say:

“On behalf of the Zone 4 Women’s Executive Committee, Helen accepted the daunting challenge of modernizing the method of communicating with all Zone 4 Women’s Clubs and BC Golf.  A feat unto itself as she had no previous technology skills, yet became the associate developer, designer and subsequent administrator for the newly implemented website. She successfully negotiated with the Zone 4 Men’s Executive Committee re: the possibility of cost-sharing for the website. She worked with Frank Umperville, the webmaster, to learn how to administrate it. Not an easy challenge but she made it happen! In October of 2006, it was up and running! It was the first of all BC Golf Zone’s Women’s golf websites to be linked to and through BC Golf.”

Also, Brown wanted a couple of examples of nomenclature inspired by Helen Steeves - which came to be known as 'Helenisms' - to be shared to help illustrate the vast knowledge and involvementnt that Helen brought to her roles as an outstanding contributor to the game.

The first, "According to Helen, not Hoyle" demonstrated how Helen possessed an incredibly deep and diverse knowledge of so many elements needed to successfully help steward the game. And one that clearly speaks for itself, "Helen is Zone 4's women's walking encylopedia of golf."