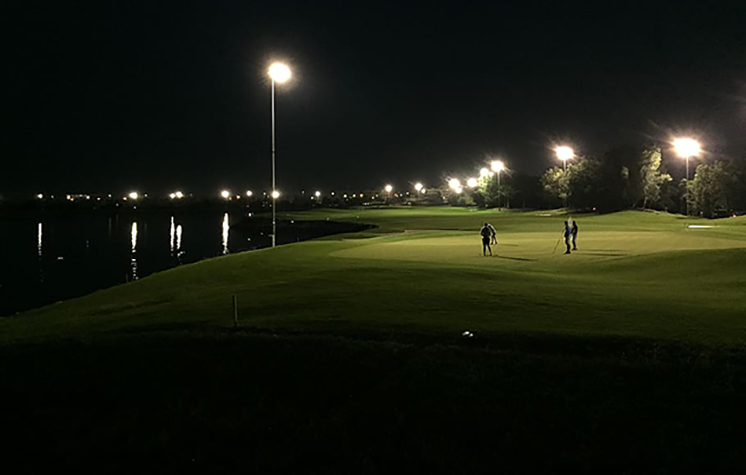 Delta Golf Course is anticipating plenty of demand when the club turns on the lights for night golf on its back nine later this fall.  The light standards have been installed and general manager Grant Steinberg hopes golfers will be playing under the lights starting sometime in mid to late November. “We’re in the hands of our electrician,” Steinberg says.

“He is not quite ready to have the health and safety inspectors come in and sign off on it. He’s still doing his testing and what not. He wants to make sure everything is tickety-boo before we do anything.”

Steinberg credits course owner Kuldeep Bansal for the night golf initiative. “He travels to Dubai on a regular basis and we were talking about a year and half ago about the golf courses over there that have lights and he said wouldn’t that be cool to do here,” Steinberg said.

“We kind of got to talking about how much it would cost and after doing a cost-benefit analysis it made total sense, especially with the way golf has blown up right now.”

Lights have been set up at 50-yard intervals on most of Delta’s holes on the back nine. I think off the top of my head we have 42 poles,” said Steinberg, who does not think the light standards will interfere with play. “We’ve sort of tucked them into the tree line, so I don’t see that as an issue,” he said. “The only issue we have is if you are on the other side of the lights when it’s dark, good luck finding that golf ball.”

Steinberg said players are anxious to play under the lights. “When we first tested the lights, the owner came out and we just had the last hole on and he put a posting on our Facebook page saying the lights are coming real soon,” Steinberg said. “And we had over 120 calls the next day and that week we had roughly 1,000 people trying to book online. And we had to tell people, sorry, it’s not open yet, but it’s coming soon. The response has been overwhelming. It is going to be a massive draw here.”

While it’s obviously a revenue source for the club, Steinberg feels night golf will also be a great grow the game initiative. “What better way to grow the game of golf than to give people more opportunity to play. People who work 9 to 5 can’t play golf (in the off-season). Now we can reach out to those people. We can have juniors come out and play a couple of holes at night. We can have night tournaments and leagues. It opens up a lot of doors.”

PRINCETON POWERHOUSE: The Vancouver duo of Tiffany Kong and Victoria Liu have helped turn the Princeton Tigers into an Ivy League powerhouse. Kong picked up her first collegiate victory Sunday and Liu was runner-up as the Tigers won the University of Delaware’s Blue Hen Invite. Kong, a junior, topped the leaderboard with a three-round total of five-over par. That was one shot better than Liu, who is in her first year at Princeton. The Tigers won their second straight tournament of the fall season by 11 shots over Harvard.

Asked in a TV interview after his win if he had drawn on his past experiences as a U.S. Open and Players Championship winner, Janzen said: “Well, Mike Darby, who has just started caddying for me recently, he watched both U.S. Open wins on YouTube and was talking about them, so there’s a good chance that had something to do with it.”

It was Janzen’s second win on the 50-and-over circuit and his first since 2015. Darby has been on the bag for three PGA TOUR wins with D.A. Points, Nick Taylor and Jim Herman.

RECORD YEAR: Another golf season is in the books for Whistler and this one was perhaps the best ever. Alan Kristmanson, the longtime general manager of Whistler Golf Club, called it a record-setting year. “It was fantastic,” he said. “We were really, really busy. I have been here a long time and that was easily the best weather season Whistler has ever had.

It was spectacular. We maybe had three rainouts until mid-September. It was crazy.” The Whistler-area courses, which closed over the Thanksgiving weekend, also benefitted from some of the challenges faced by courses in other parts of the province.

“With all the smoke in the Okanagan, I think a lot of people deferred to the Whistler region and to the Island to play. It was unfortunate for our friends in the Okanagan, you hate to see that, but I think we benefitted from that for sure.” Kristmanson said the Whistler courses also saw lots of day traffic from the Metro Vancouver area. “The stars all kind of aligned for us and it was just an absolutely fantastic summer,” he said.

ROAD TRIP: The PGA TOUR heads to Chiba, Japan for this week’s Zozo Championship. Merritt’s Roger Sloan is the lone British Columbian in the field. Sloan tied for 14th at the Sanderson Farms Championship earlier this month, but missed the cut in his other two starts in the new 2021-22 season. The only other Canadian in the field is Mackenzie Hughes, who tied for 25th at last week’s CJ Cup @ Summit in Las Vegas.

T-BIRDS DOMINATE: The UBC Thunderbirds men’s and women’s golf teams capped a perfect fall season with victories at the Battle of the Bear tournament at Okanagan Golf Club in Kelowna. The T-Bird men won the team competition with a score of seven-under par, finishing 11 shots ahead of the Victoria Vikes and Calgary Dinos. The UBC women were split into two squads with the UBC Gold team beating the UBC Blue team by five shots with a winning score of one-over par. UBC’s Elizabeth Labbe won the women’s individual title with a score of five-under par. Calgary’s Ethan Banks beat UBC’s Mackenzie Bickell in a playoff after both finished the event at six-under par.