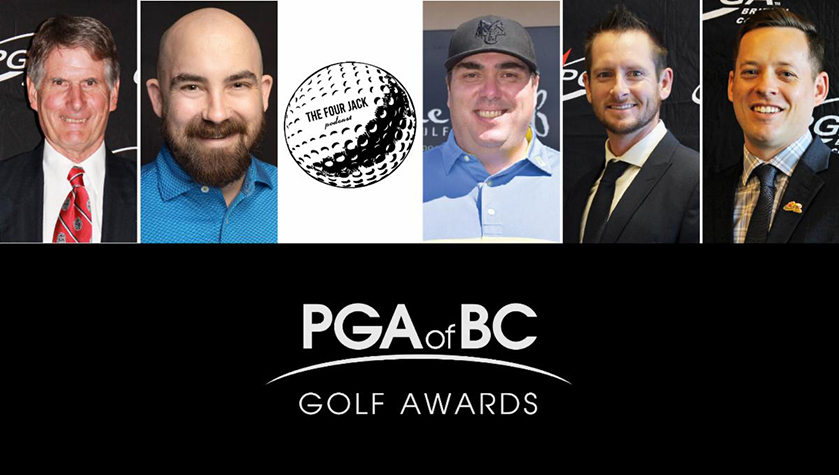 OCTOBER 6, 2021 - RICHMOND, BC (PGA of British Columbia) -- The PGA of BC is proud to name four recipients of the Association's 2021 Awards, as well as this year's PGA of BC Community Leadership Bursary and Jim Gibson Scholarship beneficiaries. These awards are designed to recognize leaders in the golf community exhibiting qualities such as volunteerism, selflessness, passion, and dedication to the game.

These honourees, along with the recipients of 11 other Association awards, will be recognized during the 2021 PGA of BC Awards Celebration presented by Replay Golf Supplies & Tribal, which will be broadcast online at 12 p.m. PT on Oct. 13.

The Dunc Sutherland Distinguished Service Award presented by Dexim Golfwear acknowledges a PGA of BC member who demonstrates exceptional commitment to the Association by supporting and promoting the Association's brand, events and initiatives. This year, the PGA of BC is pleased to present this award to Alec Hubert.

Like many sport organizations in 2021, the PGA of BC faced challenges with its championship schedule when public-health circumstances forced the rescheduling of some events. Despite being ineligible to compete in either tournament, Hubert’s guidance as the Host Professional of the PGA of BC Assistants’ & Seniors’ Championships allowed the Association to execute two memorable and well-received events in the middle of a busy summer season at Kamloops Golf & Country Club. Hubert has always been a dedicated supporter of the PGA of BC’s events and initiatives and this past year was no exception. The 35-year-old competed in three Association championships while managing staffing challenges at his facility and was recognized by his peers as the Interior Region’s Davie Black Professional Development Award recipient and is a nominee for the corresponding provincial award, with the honouree to be named next week.

The Jim Gibson Patron of the Year Award is presented each year to a person, group of people or organization that demonstrates an exceptional contribution to the Association's initiatives. This year, the PGA of BC is proud to present this award to Jack Croucher.

Having previously been the recipient of this award in 2015, Croucher’s contributions to the PGA of BC have only increased since, mostly on a volunteer basis. Although his efforts in service to the Association extend far beyond the past year, his insights and guidance during another challenging and uncertain season were especially valuable. While Croucher is known to many as the Senior Rules Referee at all PGA of BC championships and most Playing Ability Tests, his work as the Association’s Competition Advisor and leading course setup often takes place behind the scenes but is crucial to the success of those events. Croucher becomes the first individual to receive this award multiple times within the past 30 years.

The Stan Leonard Player of the Year Award presented by Axis Insurance Group recognizes exceptional play in tournament competition and is influenced heavily by the season-long PGA of BC Order of Merit, as well as participation in national events and PGA of Canada championships. Having not presented this award in 2020 due to limited competition opportunities for members, the PGA of BC is pleased to present the 2021 honour to Kevin Stinson.

Since joining the Association in 2016, Stinson has been arguably the most consistent competitor amongst the ranks of the PGA of BC, a trend that continued through the 2021 season. Stinson topped the Order of Merit this year by winning four regional tour events between the Lower Mainland’s G&G Tour and the Interior PGA Tour, as well as recording a T7 finish in the PGA of BC Assistants’ Championship and T5 result in the PGA of BC Championship. The 35-year-old also impressed by finishing as the runner-up in both the PGA Championship of Canada – at which he made just a single bogey over 72 holes – and the PGA Assistants’ Championship of Canada. This is Stinson’s first time being selected for the award.

The Arv Olson Media Personnel of the Year Award recognizes a media member or organization that has made a significant contribution to the PGA of BC over the past year. This year, we are proud to present this award to The Four Jack Podcast.

Over the course of more than 200 episodes since its 2019 launch, hosts Chris Paisley, Chris Parkinson, Tom Jackson and David Brisson have made The Four Jack Podcast a must-listen by blending global golf discussions with a local-to-British Columbia focus. In 2021 alone, the program welcomed nearly a dozen PGA of BC Professionals as guests. Many of them sat down to share their industry experiences and career highlights during wide-ranging, hour-long interviews, including Bryn Parry, Kyla Inaba, Oliver Tubb, Mark Strong and many more. Other notable guests from the past year have included Canadian PGA Tour stars Adam Hadwin and Mackenzie Hughes, broadcaster Gary McCord, PGA of Canada CEO Kevin Thistle and Black Keys drummer Patrick Carney. The program becomes the first podcast to be recognized with this award since it was inaugurally presented in 2014.

The PGA of BC Community Leadership Bursary recognizes an individual or member facility within the Association that demonstrates an extraordinary desire and passion to make a difference in the lives of others, setting an example of "giving back" with which all PGA of BC members are proud to be associated. This year, we are pleased to award the bursary to Lone Wolf Golf Club’s Larry Ramstad.

Under Ramstad’s guidance, junior-golf participation is thriving at Lone Wolf thanks to a number of club initiatives to make the game accessible and affordable for all. In collaboration with a local company, Lone Wolf has implemented a “Kids Golf for Free” program that allows youths to access the course at no charge when playing with an adult. The club’s own fundraising efforts have resulted in premium Callaway equipment sets being supplied to juniors at no charge. The $1,000 bursary will be used to support these and other junior-golf initiatives at the facility to ensure these complimentary offerings will continue to be available to youths in Northeast BC.

The Jim Gibson Scholarship is named in honour of the late Jim Gibson, a longtime supporter and Ambassador of the Association who was extremely dedicated to and well-versed in the game. The recipient of this scholarship exemplifies volunteerism and demonstrates a passion for furthering their education for their community's benefit. The PGA of BC is proud to award the 2021 scholarship to Robert Clarke.

Clarke arrived in British Columbia in late 2020 following several years based in Ontario and Alberta and has made an immediate impact at Nanaimo Golf Club by establishing the Nanaimo Junior Elite Program. The initiative has focused on building life skills applicable both on and off the golf course, as well as helping young players to prepare for and seek out post-secondary playing opportunities. All juniors involved in the program took significant strides in their games during the 2021 season, highlighted by Nanaimo’s Matthew Wilson winning the BC Boys Juvenile Championship by five strokes. Clarke intends to put the $1,000 scholarship toward enrolment in the University of British Columbia’s High Performance Coaching and Technical Leadership Graduate Certificate Program.

The PGA of BC congratulates each of the above on their achievements, and look forward to recognizing them, along with other award recipients during next week’s PGA of BC Awards Celebration presented by Replay Golf Supplies & Tribal. Click here to view a list of nominees in the remaining award categories.