The golf community supports a great cause 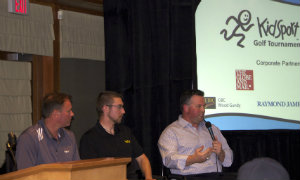 Golfers commit each game to 'going low'. But when it comes to giving back, it’s clear the golf community aims high.

Approximately $40,000 was raised through the 19th Annual KidSport Golf Tournament on Monday at Morgan Creek Golf Course, according to early calculations by the organization.

British Columbia Golf proudly took part in the tournament that brought the golf community, and non-golfers alike, together to help raise money for KidSport scholarships and raise awareness about the importance of all kids having access to sport.

KidSport provides grants for youth to participate in organized sport that can often be costly. The organization has been hosting a tournament to raise funds for almost two decades, and this year, sold out the tournament.

The incredible turn out included former Olympians and professional athletes who spoke to the attendees about how they themselves benefitted from KidSport Scholarships, a number of sports personalities who recognize the importance of getting kids active and are passionate about raising awareness lent their support, and of course, golfers who took the opportunity to give back through a game that gives them so much every round.

The most recent Economic Impact of Golf in Canada released by the National Allied Golf Associations revealed a number of impressive statistics. Golf accounts for approximately $19.7 billion in direct spending, it provides countless jobs, and draws an incredible amount of tourism domestically and from around the world.

But one of the most impressive numbers from that report, one that all golfers should be deeply proud of, is $533 million; the estimated amount that was raised by charitable golf events in 2013.

There were nearly 37,000 charitable events hosted at Canadian courses last year, according to the report, raising over half a billion dollars to support great causes.

To learn more about KidSport and support their great cause click here.