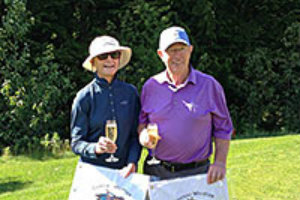 The first to card an ace was Mike Unsworth who fired a 7-iron from 118 yards on the picturesque 10th hole. The hole plays downhill to a green surrounded by bunkers and back dropped by stunning views of the nearby mountains. Not to be out done, Noreen drained a 6-rescue club from the same tee. The astounding shots were witnessed by their playing partner, Bobby Shotropa, who sadly did not make a hole-in-one for the trifecta.

Perhaps even more shocking, Noreen’s ace was her 13th hole in one…just the second for Mike.

“Holes in one are rare enough. Most golfers are fortunate to score one in a lifetime,” said Nick Droulis, Director of Golf at The Fairmont Chateau Whistler Golf Club. “Noreen has 13 of them and she went back-to-back with her husband. That’s just incredible. I hope they ran out and bought a lottery ticket following the round.”