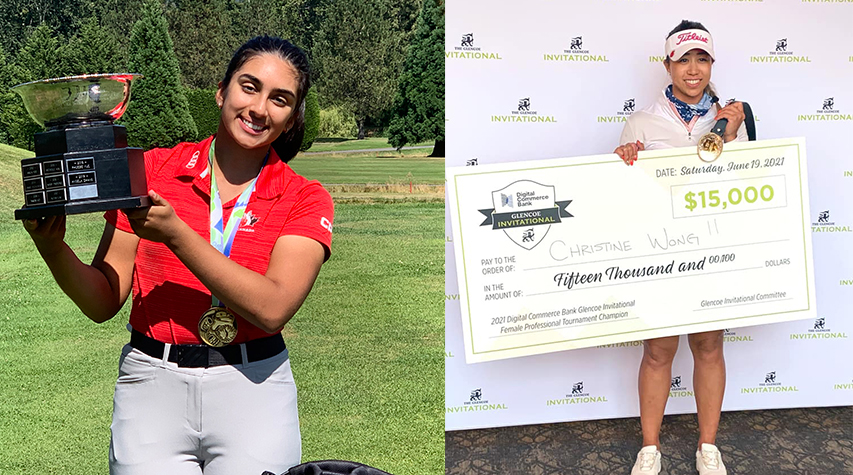 Angela Arora, Shown Here After Winning The BC Junior & Juvenile Titles Last Year, And Christine Wong With Her Winner's Cheque, Both Had Terrific Peformances At The Glencoe Invitational - Images Credt: BC Golf/Facebook/CWong

Angela Arora cruised to her win, while Christine Wong had to sweat a little en route to her victory at Calgary’s Glencoe Invitational.

Arora, the reigning B.C. Junior & Juvenile Girls champion from Surrey, won the women’s amateur division at Glencoe by nine shots. She fired rounds of 77, 69 and 70 to finish the 54-hole event at even par. Katy Rutherford of Calgary was second, while Jennifer Gu of West Vancouver and Yeji Kwon of Port Coquitlam tied for third at 12-over.

Wong won the female pro division, which was contested for the first time at Glencoe, to earn $15,000. Wong won by two shots but had to survive some anxious moments early on the back nine in Saturday’s final round.

After firing a one-under 35 on the front nine and extending her lead to three shots, Wong began her back nine by going bogey, bogey, triple-bogey before righting the ship. She fired a four-over 76 to finish the tournament at eight-over. Nicole Mendleman of Banff and Anna Young of Saskatoon tied for second at 10-over.

“As soon as I tapped in my putt on 18 I felt like everything inside of me melted away because today was a stressful, stressful day for me,” Wong said. “Just to be in contention and actually pull through at the end, I am very proud of myself. This is my biggest win and is part of the reason why I am so emotional just thinking about this round and the whole week.”

Ashton McCulloch of Kingston, Ont., won the men’s amateur division by three shots with a score of four-under par. Coquitlam’s A.J. Ewart and Aidan Goodfellow
of Parksville tied for sixth at five-over par.

OPEN SEASON: Abbotsford’s Adam Hadwin closed with a two-over 73 and tied for 40th at six-over par at the U.S. Open at Torrey Pines’ South Course in San Diego. Hadwin moved up one spot to 104th on the FedEx Cup points list and earned $43,883.

Hadwin, fellow Abbotsford native Nick Taylor and Roger Sloan of Merritt are all in the field for this week’s Travelers Championship in Cromwell, CT.

MAC ATTACK: Vancouver’s Stuart Macdonald continued his strong play and tied for 26th at the Korn Ferry Tour’s Wichita Open. Macdonald closed with a five-under 65 to finish the event at 12-under par, eight shots behind winner Harry Hall of England. Macdonald moved up three places to 58th on the Korn Ferry Tour points list and made $4,568.

Surrey’s Adam Svensson missed the cut and remains 12th on the points list. He and Macdonald are both in the field for this week’s Live and Work in Maine Open in Falmouth, Me.

B.C. STRONG: The new Forme Tour begins its eight-event season this week and features a strong British Columbia contingent. James Allenby of Langley, Chris Crisologo of Richmond, Jared du Toit of Kimberley, Callum Davison of Duncan, Lawren Rowe of Squamish and Riley Wheeldon of Comox will all tee it up in the season-opening L&J Golf Championship at Jennings Mill Country Club in Watkinsville, Ga.

The tournament offers a $110,000 US purse. At season’s end, the top five players will earn some status on next year’s Korn Ferry Tour.

Du Toit is playing after deciding not to travel to South America for last week’s event in Colombia and this week’s tournament in Ecuador. He has status on both the PGA Tour LatinoAmerica and the Forme Tour.

HE LIKES MONDAYS: Cheam Mountain pro Kevin Stinson had a pretty good Monday last week. His day started with a nine-under 63 that earned him a win at the Vancouver Golf Tour’s Hughes Trucking Open at Pitt Meadows Golf Club.

Stinson then hopped in his car and teed it up in the PGA of BC’s G&G Tour at Meadow Gardens Golf Course in Pitt Meadows, where he carded a four-under 68 to share first-place honours with Brady Stead of Ledgeview Golf Club and Greg Pool of Northview Golf Club.

Stinson finished off his week with a tie for second at the VGT’s Cheam Mountain Shootout at his his home course. His three-under 53 was three shots behind his boss at Cheam Mountain, Chad McAdie.