Duncan, BC's Tristan Mandur Is Off To The NCAA National Championships - BC Golf File Photo/Jurgen Kaminski

Tristan Mandur is going where very few University of Utah Utes have been. The reigning B.C. Amateur champion from Duncan will compete at the upcoming NCAA Championships as an individual after some terrific play at the recent NCAA Regionals in Cle Elum, Wash.

Mandur, a junior at Utah, tied for fourth at the West Regional tourney, which was played at Tumble Creek Golf Club at the Suncadia Resort about 90 minutes east of Seattle.

And while the Utes just missed finishing in the top five to advance as a team to the nationals, Mandur was the low individual on a non-qualifying team and earned a spot to nationals.

He is just the third Utah player to qualify for the NCAA Championships as an individual since 1990 and became the highest Utah finisher at a NCAA Regional tourney in school history.

Mandur shot rounds of 68, 68 and 71 to finish the 54-hole Regionals tourney at six-under par. The Utes finished tied for seventh in the team competition. “I played solid, the wind was definitely a factor,” Mandur said.

“We were tied for fifth after the second day and just needed to put up a decent number the last day. But we just didn’t really execute as well as we should have and are capable of. So I am a little disappointed there. But it had been 29 years since the Utes had made it to regionals so it was definitely cool to be there this year.”

Utah coach Garrett Clegg had high praise for Mandur. “I’m extremely excited for Tristan,” Clegg said. “What an incredible week he had and an amazing accomplishment to qualify for the NCAA Championships.”

Mandur won’t be seeing Greyhawk for the first time. “The whole team played there about a month ago,” Mandur said. “It’s a cool track. I know it’s going to be hot, it’ll be 38 degrees Celsius. I am just going to try and go out and play my own game and have fun.” 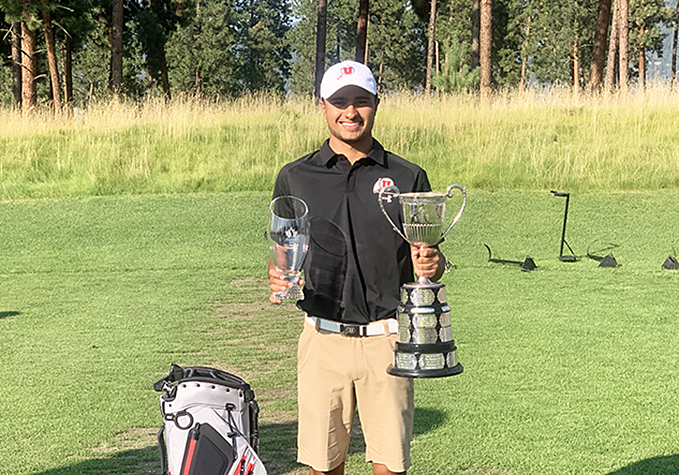 Tristan Mandur Plans To Return To Defend His B.C. Amateur Title This Summer At Storey Creek

Mandur’s game has been solid of late. He advanced at a U.S. Open local qualifier in Utah earlier this month and on Monday and Tuesday played in a 36-hole U.S. Open final qualifier in Dallas. He failed to advance in a stacked field that included many PGA TOUR regulars playing this week’s Charles Schwab Challenge at Colonial Country Club in Fort Worth, Tex.

“Overall, my short game has been good,” Mandur said of his recent strong play. “My chipping and putting have been pretty solid. I think that has probably been the main thing.”

Mandur is majoring in financial planning and hopes to play pro golf after graduating next year. He said his experience at Utah has been exceptional. “It has been fantastic,” he said. “It has been a lot of fun. I have really enjoyed it.”

Mandur won the B.C. Amateur Championship last summer at Okanagan Golf Club’s Bear Course in Kelowna. He hopes to defend his title this summer at Storey Creek Golf Course in Campbell River. “I’d love to come back,” he said. “Storey Creek is decently close to my home. I have played there before, like the course and I really want to come back and play. I am planning on playing and have signed up for it.”

Mandur is also slated to be part of B.C.’s team at the Pacific Coast Amateur Championship, which goes July 20-23 at Chambers Bay Golf Course near Tacoma, Wash. He’ll be joined on the B.C. team by Henry Lee and A.J. Ewart, both of Coquitlam.