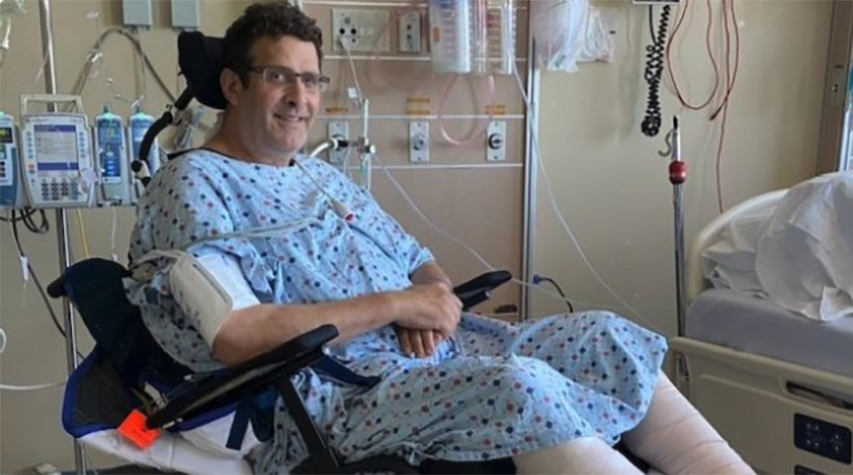 Master Superintendent Tim Kubash Is Determined To Continue In His Chosen Profession Following A Devastating Accident - Image via GoFundme.com

His many friends throughout the golf industry and so many others are rallying to support longtime superintendent Tim Kubash after a life-altering accident earlier this month.

Kubash, a Canadian Golf Superintendents Association Master Superintendent, suffered devastating injuries May 5th when the tractor he was using to smooth the driveway at his Salmon Arm home tipped over a slope.

Kubash was thrown head first into the canopy of the vehicle and snapped his C6 and C7 vertebrae. He was flown by air ambulance to Vancouver General Hospital and has lost the use of his legs.

Friends quickly rallied behind Kubash and started a GoFundMe campaign to help him with therapy and renovations that will be required to his home. As of May 24, nearly $50,000 of the $150,000 goal had been pledged.

Dave Charlton is one of Kubash’s many friends who helped get the campaign started. Charlton and Kubash go back a long way. They met in 1988 when both worked at Sechelt (now Blue Ocean) Golf Club. It was Charlton’s first job as director of golf and Kubash was the grow-in superintendent at Sechelt and stayed on as superintendent after the course opened.

“That’s where our partnership started,” Charlton said. “We got along so well, so when I got the opportunity (in the mid-1990s) to go over to Golden Eagle and work for the Aquilinis, I dragged Tim along with me.”

Charlton left Golden Eagle to go to Salmon Arm Golf Club and “shortly thereafter I had Tim join me there.” Kubash was at Salmon Arm for 25 years before leaving about a year ago when the club changed ownership.

“He has good days and bad days, as you would expect,” says Charlton, who now lives in the Kitchener, Ont., area but talks on the phone with Kubash almost every day. “He has an incredible attitude and I think his humour will get him through.”

Kubash took to Twitter this past weekend to thank everyone for their support. He hopes one day he can return to the golf industry. “I now have pins and rods holding up and replacing some vertebrae,” Kubash said.

“I have about 30 per cent of the previous strength I had in my upper body. I am paralyzed below my chest. In a few days I will be headed to GF Strong where the hard work will begin and I will learn to live independently in a wheelchair.

“I am hopeful at some point I can return to work in the golf industry and continue where I left off. Granted, the how will be different, but the why will be the same: it’s my passion and with all of you supporting me so much, I know I picked the right career.”

Contributions and messages of support for Kubash can be made at https://bit.ly/3oH0UTb

MAKING FRIENDS: Like so many others, Adam Hadwin had his share of tough moments on Kiawah Island’s demanding Ocean Course during the PGA Championship. But the Abbotsford product managed to make the cut and apparently did not lose his sense of humour during a difficult third round. Hadwin hit his tee shot on the par 4 third hole out of bounds during the third round and his wife Jessica complimented her husband on the way he handled the adversity.

“Adam hitting it OB and waiting on the tee for confirmation it’s gone while politely/awkwardly asking the crowd by the tee ‘so what do you guys want to talk about’ is very typical Adam,” Jessica posted on her Twitter account. Adam later responded with a tweet of his own: “I was feeling lonely, wanted to make some new friends.” Hadwin went on to finish the event tied for 64th at eight-over par. He made $20,200 and remains 120th on the PGA Tour’s FedEx Cup points list.

TEXAS TIME: Hadwin and fellow Abbotsford product Nick Taylor are both in the field for this week’s Charles Schwab Challenge at Colonial Country Club in Fort Worth, Tex. Hadwin’s best finish at Colonial came in 2015 when he tied for fifth. Taylor’s best finish there was a tie for 27th, also in 2015. Merritt’s Roger Sloan was listed as the eighth alternate.

SOLID STRETCH: Vancouver’s Stuart Macdonald continued his solid play on the Korn Ferry Tour, tying for 26th at the AdventHealth Championship in Kansas City. Macdonald closed with a three-under 69 to finish at nine-under par, 10 shots behind winner Cameron Young of Scarsborough, N.Y.

Macdonald earned $5,156, but dropped two spots to 99th on the Korn Ferry points list. He and Surrey’s Adam Svensson, who took last week off, are in the field for this week’s Evans Scholars Invitational in Glenview, Ill.

Du Toit was inside the top five heading into the final round, but fell back to finish tied for 19th at four-under par after closing with a three-over 73 to complete the 54-hole event at four-under par. He made $1,487. Vancouver’s Ryan Williams tied for 25th at two-under and earned $1,237, while Riley Wheeldon of Comox tied for 38th at even par and made $937.

TOUGH FINISH: Henry Lee’s collegiate golf career at the University of Washington did not end quite the way the Coquitlam native had hoped. Needing to finish inside the top five at the NCAA Regionals at Tumble Creek Golf Course in Cle Elum, Wash., to advance to the NCAA national championship tourney, Lee and the Huskies had a disappointing final day and slipped into a tie for seventh. “We’re obviously very disappointed in how this season had to end,” said Washington coach Alan Murray.

“The guys gave it their all and played their hearts out so right now it is just very raw. We had the worst type of round you could have at the exact worst time to have it. There wasn’t a chance for us to bounce back and it’s just hard to end the season like this, especially for our super senior Henry Lee.”

Lee tied for 33rd overall at the regionals. He shot scores of 72-70-77 to finish at six-over par. B.C. Amateur champion Tristan Mandur of Duncan, who plays for the University of Utah, tied for fourth spot individually to earn a spot at the NCAA national tourney. Utah finished tied for seventh spot with the Huskies.