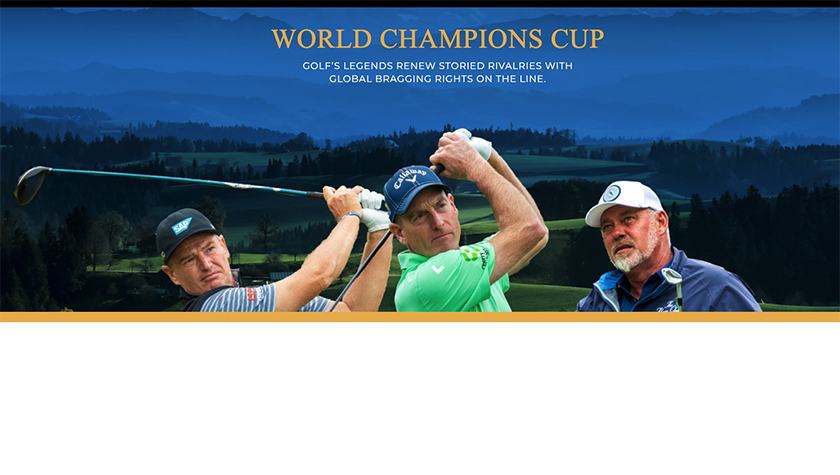 CHICAGO (MARCH 16, 2021) – A unique and exciting new professional golf competition is ready to take the world stage, as sports media and marketing firm Intersport announced the creation of the World Champions Cup, scheduled to debut in the fall of 2022.

Inspired by the passion and tradition of the Ryder Cup and Presidents Cup, the World Champions Cup will be a first-of-its-kind golf tournament featuring Team USA, Team Europe and Team World squaring off over three days of competition that will renew some of the game’s most storied rivalries as the teams battle for international pride and global bragging rights.

World Golf Hall of Famer Ernie Els, 2003 U.S. Open champion Jim Furyk and 2011 The Open champion Darren Clarke will each serve as playing captains for their respective teams of six competitors, all aged 50 and older, in the first playing of the World Champions Cup. Seven-time PGA TOUR winner and popular golf commentator Peter Jacobsen will serve as Chairman of the inaugural event.

“This is a truly exciting day for golf fans and for all of us who love the game,” said Charles N. Besser, Chairman and CEO of Intersport. “Our team at Intersport has invested a significant amount of time and effort into developing this concept. The World Champions Cup is a continuation of Intersport’s history of launching significant new events that endure for decades. We are confident that the World Champions Cup will renew golf’s legendary rivalries on a global stage while bringing innovation to the game we love. We can’t wait to tee off in 2022.”

Intersport has been creating award-winning sports and entertainment-based marketing platforms since 1985. In addition to launching and operating the PGA TOUR’s Rocket Mortgage Classic, which, in its inaugural year, was the TOUR’s most awarded event on the 2018-19 schedule, Intersport is an Emmy Award winner and owns and operates nearly a dozen nationally televised sports properties.

The World Champions Cup is sanctioned by the PGA TOUR. The annual three-team, three-day match play competition will be held at one of America’s great golf courses and will be contested across twice-daily, nine-hole matches featuring team formats and singles play, with points being earned for each hole won in each match. When the three-day competition concludes, the team with the highest point total across all matches will be crowned the champion.

“We are excited to add this global event to the golf calendar starting in 2022 and are appreciative of Intersport’s passion to begin a new world-wide golf tradition,” said Miller Brady, President of PGA TOUR Champions. “The World Champions Cup will give golf fans the opportunity to see the game’s greatest players come together in a team format on the world’s biggest stage. International team events are some of the most significant competitions in our game and it will be fun to see Ernie, Jim and Darren, along with their teammates, compete for the inaugural World Champions Cup next year.”

Els, a native of South Africa, will captain Team World. The former World No. 1 player, elected to the World Golf Hall of Fame in 2011, boasts a resume that includes 19 PGA TOUR victories and 47 international wins. The biggest among those are his two U.S. Open titles (1994 and 1997) and his two wins a full decade apart at The Open (2002, 2012). The Big Easy has been a member of eight Presidents Cup teams and captained the International squad in 2019.

“International team golf events have provided me with some of my greatest golf memories,” Els said. “I have spent my career competing in global golf championships and supporting the growth of the game across the world. It’s a great honor to be named the captain of Team World for the inaugural World Champions Cup.”

Furyk will captain Team USA. Throughout his career, Furyk has represented Team USA in seven Presidents Cups, nine Ryder Cups and served as a Ryder Cup captain in 2018. He is a 17-time winner on the PGA TOUR, the 2003 U.S. Open champion, and a two-time winner on PGA TOUR Champions. Furyk is also the owner of the lowest round in PGA TOUR history, having shot 58 in the fourth round of the Travelers Championship in 2016.

“I am excited to lead Team USA and recapture the great global team championships I have been fortunate enough to enjoy during my career,” Furyk said. “For more than 20 years, I have been competing against Ernie and Darren, and I look forward to having the chance to captain Team USA and play against them in the World Champions Cup.”

Clarke, a native of Northern Ireland, will captain Team Europe. He is most famous for his 2011 victory at The Open at Royal St. George’s, where he finished three strokes better than Phil Mickelson and Dustin Johnson. A member of five Ryder Cup teams and the 2016 captain for Team Europe, Clarke’s resume includes victories at two PGA TOUR World Golf Championships events and two PGA TOUR Champions events, as well as 15 international wins.

“I am extremely proud to be named captain of Team Europe for the inaugural playing of the World Champions Cup,” Clarke said. “To be selected along with Jim and Ernie, two of golf’s all-time great players, is an honor. I have been fortunate to compete in many global team events, but I am as excited about captaining and playing in the World Champions Cup as I ever have been throughout my career.”

Jacobsen, the Chairman of the inaugural World Champions Cup, is a seven-time PGA TOUR winner, two-time PGA TOUR Champions winner and the 2004 U.S. Senior Open champion. A popular golf media personality for the past two decades, Jacobsen has established himself as one of the great ambassadors of golf. He represents everything a professional athlete and committed community leader should be. Throughout the years he has used his talents and status to transcend the game of golf and touch the lives of many.

“I have spent nearly all of my life playing, watching, talking and loving the game of golf,” Jacobsen said. “After nearly 40 years on the PGA TOUR, it is the honor of a lifetime to have the opportunity to represent something as significant as the World Champions Cup will one day be for golf.”