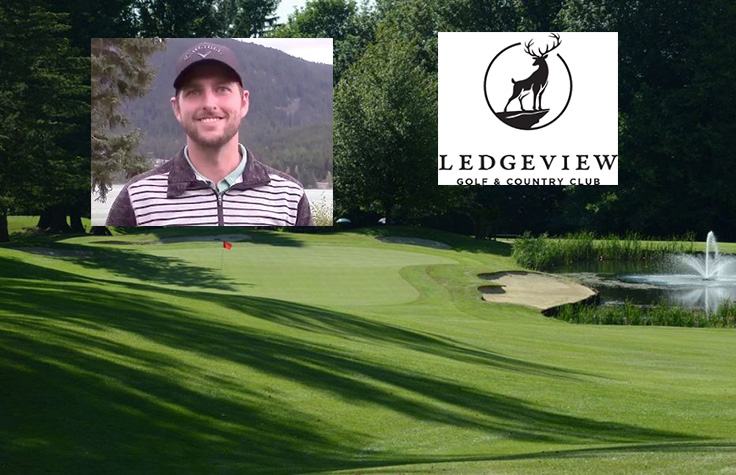 Brad Clapp’s timing seems to be just about perfect as he joins Ledgeview Golf Club as general manager of the storied Abbotsford facility.

Golf is booming, thanks in no small part to the COVID-19 pandemic, and Ledgeview is about to open a brand new clubhouse. The future looks bright for the course that has produced the likes of PGA TOUR winners Adam Hadwin and Nick Taylor, and Clapp is delighted to be a part of it.

Clapp, a former winner on the Mackenzie Tour-PGA Tour Canada circuit and past PGA of BC champion, was in no need of a Ledgeview refresher when he applied for the job.

The 33-year-old grew up down the road in Chilliwack and has played plenty of golf at Ledgeview over the years. “The course is a staple in this community,” Clapp says. “When you think about golf in Abbotsford you think about Ledgeview. Can you name another golf course that has produced so many good players, not just currently, but going back to Ray Stewart. I am very excited. There are a crazy number of exciting things happening at Ledgeview.”

The new clubhouse, scheduled to open very soon, is huge for Ledgeview. The club lost its former clubhouse to a fire back in 2016 and there was a long struggle before the City of Abbotsford finally got behind building a replacement.

Clapp joins a team that includes director of golf Gerry Hadwin, who shepherded the club through some difficult times following the fire. “They’ve had a really strong team here the last couple of years in getting through some of the tough times after the fire,” Clapp says.

“Gerry has worked so hard to keep this place going. Gerry is a huge asset and I am looking at this as a great opportunity to work with him and grow my knowledge of not only Ledgeview but of the golf business itself.”

After ending his touring pro days, Clapp served a stint as general manager of Cultus Lake Golf Club. Although his touring days are behind him, Clapp hopes to continue to compete locally on the Vancouver Golf Tour and in PGA of BC events.

“That to me is part of my job, where I am going out and representing Ledgeview Golf Club,” he says. “I definitely want to play. And I want to play with some of the members to get to know them.”

Clapp also wants to get more comfortable on Ledgeview, a relatively short par-70 layout which he says has always confounded him. “As a professional, I have said Ledgeview has always given me a hard time,” he says. “I feel like I can’t score on it and I have never felt like I have played it well. I have never really understood how to take it low on the course.”

Clapp did take it low a couple of times at Ledgeview. He closed with two rounds of 66 to win the 2015 Vancouver Open at Ledgeview. Like most clubs these days, business is booming at Ledgeview. Clapp wants to keep it that way. “The general interest in the game of golf since the pandemic has happened I think is a huge opportunity for our industry,” he says.

“Personally, I am making it a big goal to convert some of the new golfers. We need to give them an affordable and well-balanced experience so that we retain them. . .That is what excites me, to capture some of these new golfers and show them how great the game is.”

HADWIN HOT AT HONDA: Abbotsford’s Adam Hadwin closed with a two-under 68 and cracked the top 10 at the Honda Classic in Palm Beach Gardens, Fla. Hadwin’s five-under total left him in a five-way tie for eighth spot, seven shots behind winner Matt Jones of Australia. It was Hadwin’s first top 10 since last July when he tied for fourth at the Rocket Mortgage Classic.

Sloan is competing in this week’s Corales Punta Cana Resort & Club Championship in the Dominican Republic. Hadwin and fellow Abbotsford product Nick Taylor, who missed the cut by one shot at the Honda Classic, are taking this week off.

TOP 10 FOR SVENSSON: Surrey’s Adam Svensson tied for eighth at the Korn Ferry Tour’s Chitimacha Louisiana Open. His 72-hole score of 12-under par was six shots behind winner Roberto Diaz of Mexico. Svensson moved up two spots to No. 40 on the Korn Ferry Tour points list and earned $15,922. Svensson and Vancouver’s Stuart Macdonald are both in the field for this week’s Club Car Championship at the Landing Club in Savannah, Ga.

RUNNING HOT: Coquitlam’s AJ Ewart posted his second straight runner-up finish for Barry University, a NCAA Division II school in southern Florida. Ewart tied for second at the Southeastern Intercollegiate tourney in Valdosta, Ga. Ewart, now in his sophomore year at Barry, shot a nine-under par 63 in the second round of the 54-hole event. He finished the tournament at six-under par, one shot behind winner Beck Burnette of Lee University. Ewart currently leads the NCAA Division II men’s player rankings.

ALL SYSTEMS GO: The PGA of British Columbia plans to run a full championship tournament season this year after having to cancel or modify some events last year due to COVID-19.

CHIP SHOTS: The Symetra Tour started its 2021 season with the Carlisle Arizona Women’s Golf Classic in Mesa. Kelowna’s Samantha Richdale, who is second on the Symetra Tour’s career money list, missed the cut in what was her 193rd tour event. . .Cody Stewart, head coach of the University of the Fraser Valley women’s golf team, will welcome Ella Gifford of Beaumont, Alta., and Coral Hamade of Langley to the Cascades program this fall...Sagebrush Golf & Sporting Club in Merritt has appointed Mark Strong as the general manager of the facility.